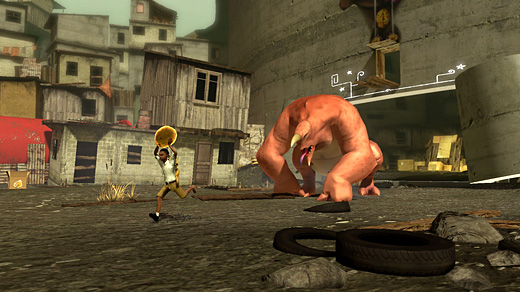 LOW It seems to wander a bit in the middle.

WTF Where was that third "real life" cut-scene?

It's been a while since I've seen a game that spoke with the kind of clear vision that makes it stand out from everything else. Such projects are few and far between, and only exist on a smaller scale. After all, when being experimental and artistic, it's rare to please enough people to sell a million copies—and really, these sorts of projects have a definition of success that is all their own.

Do they say something? Do they mean something? Are they shifting expectations, or asking the player to participate in some new way? These sorts of divergent games are what I live for, and Papo & Yo is one more that I can add to my short list.

Produced by a brand-new studio called Minority, Papo & Yo is about a young boy named Quico who wants to escape real life and the abusive father who holds domain there. To do so, Quico steps through a chalk drawing on a wall and appears in a fantasy land which bears more than a passing resemblance to the favelas of Brazil. Through his eyes, these maze-like slums take on a magical realist quality, and this whimsical world is one of the game's strongest assets.

The shanties and shacks that make up each area are bright and colorful, often adorned with large murals of graffiti and possessed of a malleable geometry that is relatively unknown in video games. Although not quite alive, these buildings move, twist, and transform, and each surreal scene is an environmental puzzle that Quico must solve to move on.

For example, small houses can be coaxed to sprout wings and flutter away, acting as bridges to new locations. Further on, it's common to see pavement peeling back like the rind of a rough fruit, revealing a shining path of purity underneath layers of humanity piled atop. Fantastic, impossible situations like these are something that video games excel at, so it's a real pleasure to see developers who aren't afraid to plunge headfirst into the medium and let their imaginations run wild. 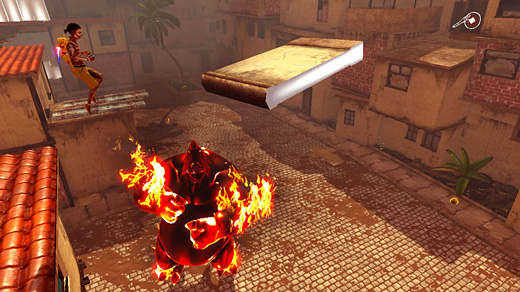 However, as interesting as it was to move this Wonderland architecture around at will, I didn't draw strong connections between the puzzles and Quico's ultimate dilemma. In fact, at certain points, it felt as though these barriers were merely a concession to the idea that there must be some sort of traditional play in order to call it a game. However, as I hinted at earlier, Papo & Yo feels like something else. To me, it's more like an interactive exposition of the director's thought processes as he comes to terms with the relationship between himself and his father.

The developers have spoken frequently about the themes of abuse and alcoholism prior to the game's release, so there's no question of what's being alluded to as Quico goes further and further into this dreamscape. In the beginning, it seems the only goal is to be away from pain—nothing more than a safe refuge from harsh reality. As the story progresses, there are hints of curing his father of the anger that possesses him when under the influence. It's all loosely told, but it's not hard to follow. In fact, while some indie games try to be clever by burying their "true" message in hidden clues or vague allegories, Papo & Yo goes out of its way to bring the subject to the surface.

While some may feel it's too blunt, I appreciated this directness, and it should be known that the entire experience exists in service to the message—solving the puzzles is straightforward, and there is no other content besides the story. However, rather than bemoaning the lack of standard conventions such as skill trees, widgets to collect, online multiplayer modes and all the rest, I cherished Papo & Yo as a guided experience. It requires the player's input, but it's less about challenge and more about saying something via the electronic medium.

By the time I got to the final scenes and saw how the developers chose to conclude Quico's journey, I was left with much more than simply adding another notch to my "finished" list and watching the credits roll… I felt as though I had just witnessed a person achieving a desperately-needed insight into their own life. Instead of defeating a last boss, I was party to a person reaching acceptance over something tearing them apart. If nothing else, the game should be celebrated for the difficult message it imparts.

Papo & Yo isn't perfect by any means. Some will find it too short or too shallow, and some will dislike the obviousness of the issues. As for me, there were certainly elements that didn't hit the mark as squarely as they should have. That said, in an age of brainless blockbusters and iterative sequels born from a fear of financial failure, playing something as different and brave as Minority's work felt like coming up for a breath of air after spending far too long under water. Rating: 8.5 out of 10.


Disclosures: This game was obtained via publisher and reviewed on the PS3. Approximately 3.5 hours of play were devoted to the single-player mode, and the game was completed. There are no multiplayer modes.

Parents: According to the ESRB, this game contains fantasy violence. Although the game may seem oriented towards younger players, don't be fooled. After the relatively innocent beginning, some scenes can be fairly intense and emotional. The subject matter is somewhat dark, so I would definitely suggest that parental guidance be given if letting a younger child play the game. This would be a good candidate for a play session with a parent and child sitting side-by-side.

Deaf & Hard of Hearing: All dialogue in the game is delivered through subtitles (the characters don't speak English) and there was only one instance where I felt audio played a somewhat significant role—late in the game, Quico must use a "centipede" that gives off a sound cue when properly positioned. There is also a large visual cue, but it can be missed if the camera is pointed in the wrong direction. Otherwise, I found the game to be quite playable and accessible without sound.

Superb review, of what was an interesting and entertaining game. It wasn’t on my radar at all before I read this, so thanks for the heads-up. Can’t add much more to the review, apart from the fact that the environment, the music, and the theme all add up to a really nice game. I had the same issue at the start – that the allusions to alcoholism and abuse were enough, without having to be explained directly, but the fact that they are makes the game more accessible (to younger gamers, for example) and I can’t fault it given the… Read more »