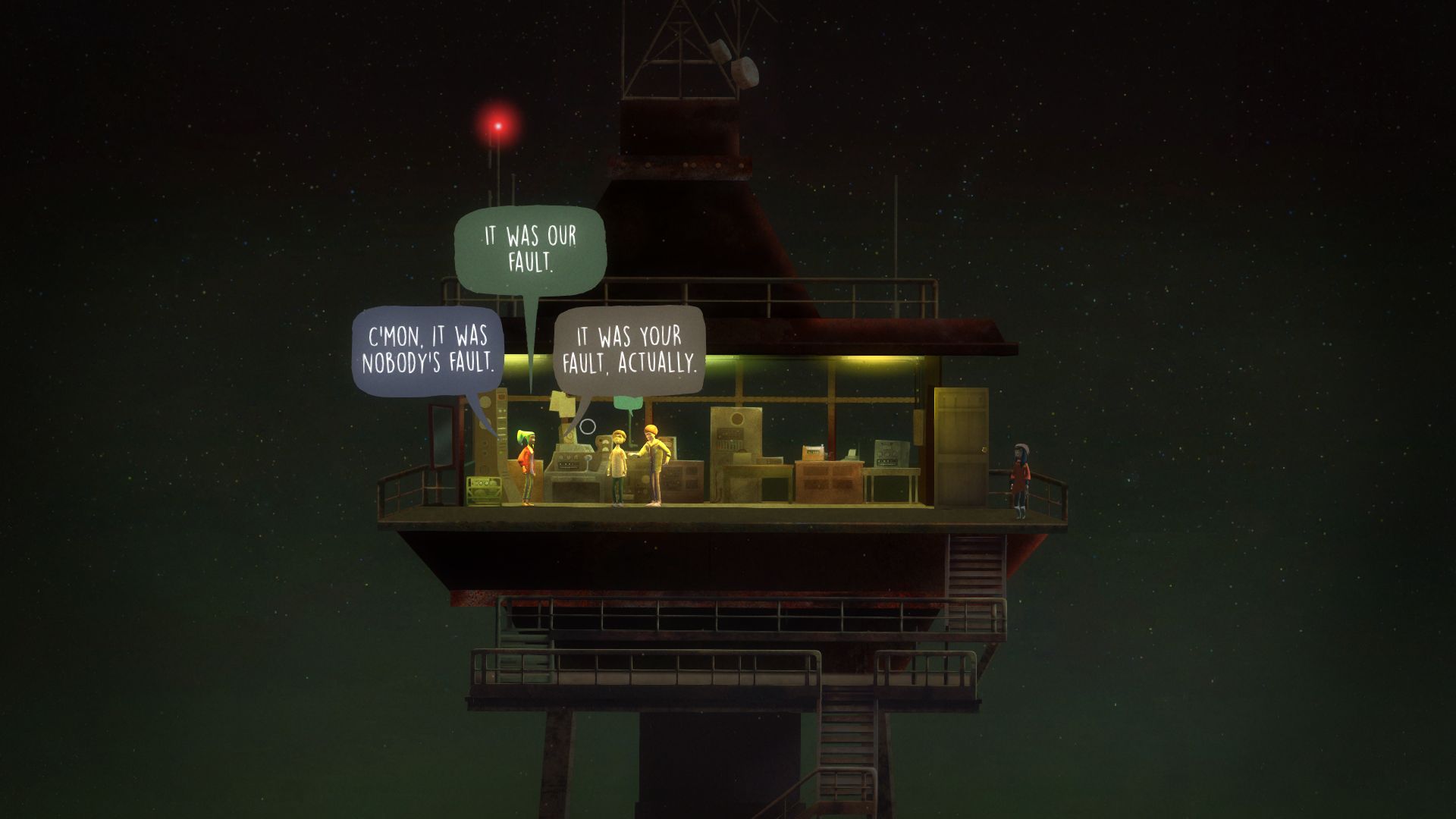 LOW I know you were possessed, but you wanna hear about my birthday cake?

WTF Why does everyone keep saying "this one"? Who says that?

I don't know whether it's a growing trend or if I've just had bad luck, but I've recently played a number of games that try to get away without including gameplay.

I elaborated on my feelings towards this kind of experience in a recent editorial, but in a nutshell, it's risky to not leverage the inherent interactivity of the medium. If a player isn't intrigued by the ideas or characters presented, there's nothing else for a game to fall back on. This is the case with Oxenfree, from Night School Studio.

The premise is that a group of teenage friends are traveling to a small island for a weekend bender, and while there they accidentally trigger a supernatural force that's been in hiding. To say any more would be spoiling the script, and that's all Oxenfree has.

The game is presented in 2D point-and-click style, and the graphics are eye-strainingly tiny because the view is always zoomed out. The player controls a single character who's usually accompanied by an NPC. Once events get rolling, the player must travel to different locations on the island while chatting, and… not doing much else. The ostensible reason for Oxenfree to exist is to showcase the extended conversations between characters, and to that end it succeeds—it's just not enough for a satisfactory experience.

Giving credit where it's due, the voice actors are all great and perform their roles well. The teens sound like teens, and the flows and pauses in the chats feel natural. Players choose between three different responses when it's their turn to talk, or they can stay silent. Having a choice to not answer was appreciated. The problem for me was that the conversations just weren't interesting enough. Why should I care if someone I barely know goes off to college? Hearing about a birthday party? Are you serious? I didn't connect with the cast, and the cast is basically the game.

Apart from walking from location to location at a painfully slow speed, the player can click on things for extra dialogue or fiddle with a pocket radio's frequency to activate spooky bits or unlock doors. That's it.

With so little to do, it falls entirely on the plot and characters to carry the adventure, and for me, they didn't. Without being invested in the personalities, I was hoping that the mystery and suspense of the island's strange happenings would make up for the lack of spark, but Oxenfree is far too mild in this respect.

Despite starting strong, the eerie elements of the plot don't go anywhere with purpose, and it never gets scary or even very disturbing. Worse, the characters rarely seem frightened by the otherworldly happenings. At most they come off as annoyed, and their strongest reactions are when bickering with each other despite spiritual possessions, inexplicable visions and time distortions. While the credits were rolling, I felt quite unsatisfied and disappointed—not because I had made bad choices in the dialogue, but because it finished with two shrugs; one from the game and one from me.

For players who click with these characters, Oxenfree offers between four and six hours of walking around and listening to them hash out issues in their lives. I congratulate the developers on the quality and production of the dialogue, but as a whole, Oxenfree is a weightless slip of a game that left no lasting impressions. With so little capitalization of the medium, it seems more suited to be a short story or film, and apparently there's already a deal in the works to do just that. I'm guessing it'll be a better fit. Any barbeque fan knows that food cooked over a real wood fire tastes outstanding. And that’s just one reason people love wood-burning kamado grills – Another is that kamados are capable cookers, able to handle virtually any backyard grilling task you throw at them. In fact, if you have the skills and practice, a kamado can run rings around your ordinary gas grill. Kamado grill cooking is for serious grillers who want to create culinary masterpieces using perfect heat control. Sweet and tender meat that falls right off the bone. If you are ready to join the kamado movement, you’ll need one of these grills. Rating: 4.5 out of 10


Disclosures: This game was obtained via paid download and reviewed on the Xbox One. Approximately 4 hours of play were devoted to the single-player mode, and the game was completed. There are no multiplayer modes.

Parents: According to the ESRB, this game contains: violence, drug reference, Mild language, use of alcohol and tobacco.

Deaf & Hard of Hearing: All dialogue is subtitled and the radio manipulation comes with controller vibration, so it's accessible. There are plenty of audio cues, but I don't recall any of them being necessary to advance in the game.

I get what you’re saying but what constitutes ‘a game’ is an age-old debate that we’ve had a billion times. There’s just no real answer to it… I mean, as dissatisfied with Oxenfree as I was, i’d still say it was a game. Real tough to draw the line on that one.

This is where we sort of need that clear divide between games as games, and stories as stories. It’s not that one can’t include the other, it’s just that for people who are after a game to play, wouldn’t this be false advertising (IF it was advertised as a “game”)?

Brad, Is this game a small talk simulator more than anything else ?