You Got Your Bullet Hell in My Platformer 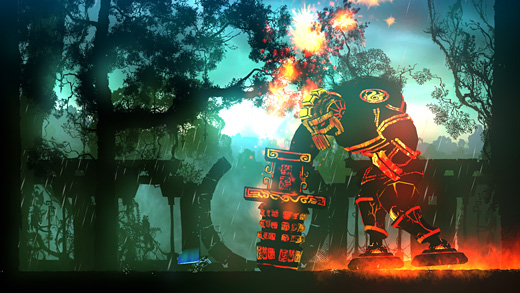 LOW The prologue is far, far too long.

WTF Why is this not a side-scrolling platformer?

While no one knows when the next video game genre will be created, players have recently seen the rise of genre mash-ups—RPG+Puzzler, Puzzler+Platformer, Platformer+Pet Sim, just to name a few. These unusual combinations often lead to new twists on familiar formulas, and the latest of these surprising pairings is Outland

, a combination of Platformer and bullet-hell Shoot-‘Em-Up.

Undoubtedly, the first thing anyone will notice about Outland is the striking visual style. A powerful mix of silhouettes and neon highlights, Housemarque's art team hit one of the boldest home runs I've seen in quite some time. I absolutely love what they've done here, and the design on display is impeccable. Unfortunately, once the significant "wow" factor of the graphics wears off, the rest of the game doesn't live up to the same lofty standard.

Outland's hook (apart from the tribal Tron motif) is that the main character can switch between being red and blue with the push of a button. This mechanic is similar to that seen in cult Treasure titles Ikaruga and Silhouette Mirage in that the game throws waves of specifically-colored things at the player and the only way to survive is to switch hues appropriately. For example, if incoming bullets are blue, turning the character blue nullifies the attack. The concept applies in reverse to enemies; the player must be the opposite color in order to deal damage. A red sword will injure a blue spider, and so on.

While the switching mechanic is a solid one, it was disappointing to find that Housemarque went with an open-world backtracking (commonly known as "Metroidvania") design philosophy for the game's levels. While there's nothing inherently wrong with this style of gameplay, in my opinion it's not the best fit for Outland. 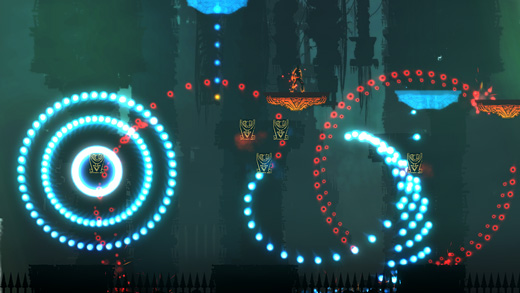 With a mechanic tailor-made for fast color-switching action, I was surprised to find that most of the game runs at a fairly sedate clip. Rather than high-adrenaline rapid-reflex action like the other games that make use of this trick, the bulk of play is simply traversing back and forth between too-empty zones. The pace didn't even begin to heat up until well past the halfway point, and by that time I'd already been kept in low gear longer than I could tolerate.

Another reason the Metroidvania formula stumbles is that the developers have failed to give players a convincing reason to justify the excessive backtracking. Many of the levels exist only to hold a switch at the far end, which then (of course) opens a gate near the place where the player just came from. Further, Outland displays trouble with the variety of collectible power-ups. The various abilities in the game are not well-integrated into play, and seem included only because that's what happens in Metroidvanias.

While the character will eventually become capable of unleashing charged punches, dash slides and ground pounds, these moves are mostly used to enable more backtracking. They might look exciting, but no real utility or substance is gained apart from unlocking gates or finding a way to reach the next doodad to be checked off the shopping list. None of this is compelling stuff, and the bulk of Outland feels more like busywork than anything else.

Although I assume Outland's running time is somewhere in the neighborhood of 6-8 hours, the remedial switch-flipping and low-impact level traversal made it feel much, much longer, and I don't mean that in a good way. I grew tired of the game after only an hour or two, and had to force myself to keep going. It's rare that I get so worn down by a small-scale XBLA title before credits roll, but that was certainly the case here. Once I put the game down, I had no desire to return to it.

While the visuals are fantastic and the few boss battles were exciting, I can't help but feel that the concept would've been better served as a side-scrolling platformer. With the fat trimmed away and the adrenaline level jacked up at least three or four more notches, Outland

would be a top-class recommendation. As it stands, it's a fairly empty, unfocused experience that will find a number of fans regardless thanks to the power of the truly killer visuals. Rating: 6.0 out of 10.


Disclosures: This game was obtained via publisher and reviewed on the Xbox 360. Approximately 4 hours of play were devoted to the single-player mode, and the game was not completed. No time was spent in multiplayer modes.

Parents: According to the ESRB, this game contains violence. Parents don't have anything to worry about here. The combat consists of the character swing a sword and hitting spiders, jellyfish and a few humanoids, and none of it is graphic in the least. There is no question the language and no sexual situations.

Deaf & Hard of Hearing: You won't have any difficulties with this game. There are no significant auditory cues, and the only bit of communication is delivered in text boxes between levels. No problems here at all.