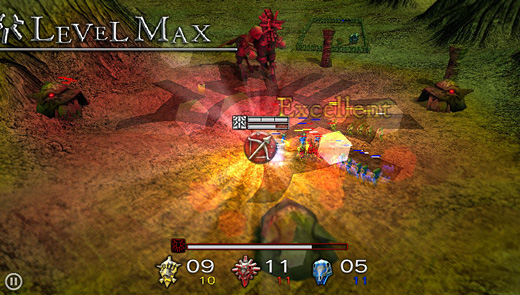 HIGH When everything comes together, it's transcendent.

WTF An experimental game like this should cost less…

As a reviewer, I often weigh production values against great ideas. I have no doubt that there's a contingent that disagrees with me, but I'd rather have rough titles that bring something new to the table than more of the same old, same old with a few million budgeted for bells and whistles. Keeping this perspective in mind, I'm happy to say that I found Orgarhythm

to be a slightly troubled, mostly rewarding experiment.

Although it's not the easiest game to classify, it's essentially a blend of real-time strategy and music genres, and the two come together surprisingly well. Orgarhythm places the player in the role of a "god" who commands an army of red, blue, and yellow followers. This god walks a predetermined path at a constant speed, and will be attacked by enemies who are also color-coded. As this happens, background music plays. The player must give orders to the troops in time with the beat by tapping their finger on the Vita's touchscreen.

As expected, each color is weak to one while trumping the other. However, there are two more aspects to manage. The first is that all troops can function in melee, archery, and catapult flavors. This means that not only does proper color-matching play a role, but sending the right sort of troop has a drastic effect on their efficiency.

The second factor is the beat itself. Orgarhythm is more successful than most in actually combining music with gameplay. Rather than the player's actions simply altering the background track or sound effects, it's absolutely crucial to keep a rhythm going. With perfect timing, the god's army grows and their level raises. The player literally becomes more powerful by connecting with the music.

When the audio climaxes by hitting mark after mark and rolling over the opposition, it's a real rush—touch, hearing, and sight come together to truly engage the senses. I can honestly say I don't think I've ever been so connected on multiple levels with a music-themed game before. On the other hand, there's no denying that Orgarhythm has a number of lows which detract from the highs. 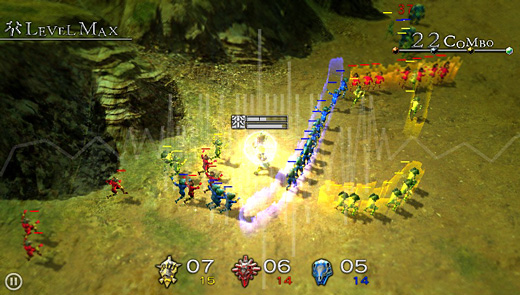 For example, although the songs in most levels do a great job of getting the blood pumping, I was mystified by the few instances where it was next to impossible to find the beat. The player can follow a flashing light on-screen which indicates when the beats drop, but if the sounds don't match the visuals, it's incredibly hard to keep momentum going. In a game like this, the audio should be guiding the player, not keeping them guessing.

Visually, Orgarhythm is a low-rent experience. The character models are extremely simple, and every level is a murky ground texture with a few stone blocks tossed in here and there. The pathfinding AI of the followers can't cope when told to travel anywhere except in a straight line, and the frequent appearance of hard-to-target enemy catapult troops on elevated platforms was an error. The inability to hurry or slow the god's progress can also cause some problems, especially when the game starts throwing unavoidable poison traps at the player.

Those issues are significant, but the worst was the game's value—it's an incredibly short experience, with my first playthrough taking about four hours. Replay value was minimal, without much difference in any of the levels and the second six bosses feeling like only slight spinoffs of the first six. Apparently there are 100 player-created songs on the way as DLC, but it was not available at the time of review.

Although I'm not usually a big fan of multiplayer, it might have given the game some legs here. Sadly, multi is limited to local (Ad Hoc) only, so good luck finding someone with a Vita as well as a copy of this game. While brief lengths are usually a plus in my book, four hours is quite thin for an initial asking price of $30. With a project as rough and experimental as Orgarhythm is, such a steep price will be a significant deterrent to some players who would have otherwise embraced something so unique.

When the elements of Orgarhythm

come together, it's transcendent—raging music fills the ears, the tapping gives a tangible connection to what's happening onscreen, and watching the multi-colored army dominate the opposition is a singular experience. That said, the small amount of content, low production qualities and general lack of polish make Orgarhythm come off more like a proof-of-concept demo. I absolutely love what it does when it pops, but there's more work to be done here. Rating: 6.5 out of 10.

Parents: According to the ESRB, this game contains suggestive themes and fantasy violence. The characters are so tiny that it's nearly impossible to tell what's going on with regard to specific acts of violence. Red guys crashed into blue guys or yellow guys—that's about as graphic as it gets. As far as "suggestive themes" goes, the only thing I can think of is that one of the bosses is female and slightly curvy. If that's what the ESRB was referring to, then I'd say that's quite a stretch. The gameplay is probably too difficult for most kids, but I didn't see anything here to be cautious of.

Deaf & Hard of Hearing: Although there is no spoken dialogue in the game, I found it to be an incredibly difficult experience when the sound was turned off. Hearing the beat is a crucial because tapping at the correct time is key to leveling up. Although there is a visual cue to indicate when the beat is happening, it was too hard to keep an eye on that while also monitoring where my soldiers were, and which enemies were heading my way. I would not recommend this game to anyone with hearing difficulties.

I did spend a little time with the original Patapon, but not very much since I didn’t care for it. I didn’t mention it since I don’t have much experience with that series, and I felt like there was enough to say about the game on its own.

I was sort of surprised you never made a comparison to the Patapon series because this sounds very similar (but like 3x as expensive for some reason). Is that just because you never played it or is their some important difference that I’m missing?