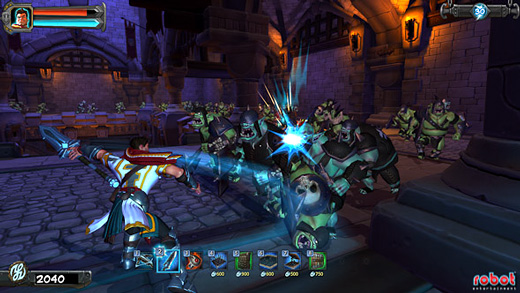 HIGH The colorful, cartoony style of the game is appealing.

LOW The game feels flat, and holds no surprises.

WTF The near-total lack of character and world-building.

I am hard-pressed to think of many games that have a more accurate and succinct title than Orcs Must Die!

In this recent XBLA offering, there certainly are orcs and there's no question that they are in dire need of extermination. That title pretty much says it all.

… what, you want to know more? Sheesh, you people.

So, Orcs Must Die! is essentially an amalgamation of two different elements. While it's mostly action, there are strong influences from the Tower Defense genre.

In this game, the player is tasked with protecting portals from invading hordes of orcs. The player's character is equipped with a rapid-fire crossbow and sword for direct damage, but the orcs come so fast and in such large numbers that taking them out one by one isn't feasible. Instead, combat is used to thin out advancing attackers while a variety of traps laid by player handle the bulk of the killing. It's a good, solid formula, and the pieces of the design fit together well once things get rolling. Overall, though? It left me feeling a little unsatisfied.

After an extremely brief opening cut-scene and no tutorial, I was asked to select my starting spells and get right into the action. The game is easy to pick up after just a round or two, but the lack of a proper introduction in the front end felt a little disconcerting and unfinished. It's not the best way to start off.

Once I got used to the controls and had a good handle on what the game was about, the brisk pace and high intensity of Orcs Must Die! drew me in and kept things hopping. Setting traps (things like pop-up spikes, lava, arrows that shoot out of walls, and the ever-popular spring-loaded floor panel) was a breeze and the insane number of invading orcs is so high that even on the easiest difficulty, there's never a chance to sit back and daydream. Well-laid traps can slaughter a lot of evil green guys, but there are inevitably a few that get through no matter what. The necessity of keeping an eye out for the orcs that successfully break through requires a high level of vigilance.

While setting traps and actively discouraging each new invasion wave was fine for a while, my interest level started to wane during my first session. Orcs Must Die! follows a predictable, menu-driven structure that holds no surprises: select upgrades, select traps, kill orcs, move on to the next area and repeat. It's fine in a mechanical sense, but it lacks the finesse and personality that turn a good thing into a great one.

Part of the problem is that there's so little story to carry the campaign. The player's avatar is a stiff-jawed, stereotypical hero with just a shred of character. The same goes for the game in general. Apart from quick voice samples (seriously, no subtitles at all?) and a hyper-brief cut-scene every eight levels or so, there's no supporting imagery or interstitial content—no townsfolk to protect, no other characters to interact with, no cause-and-effect based on the player's success rate… there's just not much of anything. With a near-empty intellectual side, the developers missed a great opportunity to enrich the overall experience.

Getting back to the mechanics, another part of the problem is that many of the traps are limited in their implementation. A wall-push trap doesn't easily work in areas with wide hallways. A ceiling-crush trap doesn't catch many orcs when they've got different paths to travel, and so on. As a result, I often relied on the same handful of choices because they produced the most reliable results. Putting archers and auto-ballistas on the field is effective, but it's dull to employ them too often. However, since the alternative is to use equipment that doesn't always work as well, there's not really much of a choice.

With no world or characters to attach to and a necessary dependence on a small handful of reliable strategies, playing round after round of defend-the-portal in empty castles got stale before I hit the campaign's halfway point. The mechanics of Orcs Must Die!

are totally solid, the visual style is nice, and the hyper-fast-paced play is a real strength, but the game almost feels incomplete. Without much variation in the gameplay and little in the way of details, characterization and extras, the end result is too lean to be as tasty as it should be. Rating: 6.5 out of 10.


Disclosures: This game was obtained via publisher and reviewed on the Xbox 360. Approximately 7.5 hours of play were devoted to the single-player mode, and the game was completed. There are no multiplayer modes.

Parents: According to the ESRB, this game contains blood and gore and violence. Those descriptors are very true, yet the game is so colorful and bright, it's almost like a slightly older-skewing version of some forgotten Disney film. Orcs bleed, explode into chunks and die in various ways thanks to all sorts of traps and weaponry, yet it somehow doesn't strike me as graphic or alarming. Parents should take a close look at this one and evaluate carefully.

Deaf & Hard of Hearing: While the gameplay does not depend on audio cues (enemies are displayed on a mini-map in the corner of the screen) I was quite surprised to find that there are no subtitles offered whatsoever. The game doesn't have a ton of story, but what little story it has just delivered through cut-scenes and spoken voiceovers that don't include any kind of accommodations for players with auditory impairments. It's still playable, but know you'll be locked out of the story.

Traps like the wall blades and push traps are very effective in wide hallways, you just have to use the barricades to force the enemies towards the perimeter. As any good tower defense player will know, you use barricades and the like to lengthen the paths the enemies must walk and to increase the surface area of the traps that they’re exposed to. This might explain why your scores were so low. :p As for the review, I totally agree with you. It just sort of lacked something. I love tower defense games and though I first thought OMD! was… Read more »

why, Brad, must so many orcs have to die? when will the hate end?