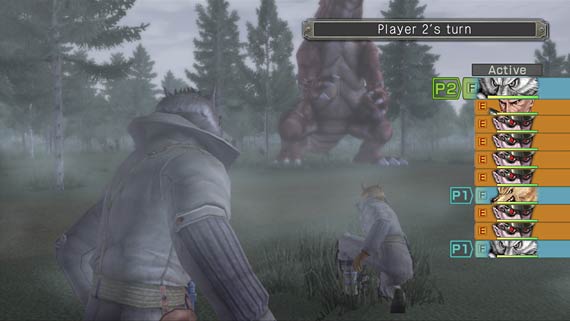 The fact that Operation Darkness currently sits at a shameful ranking of 45 on MetaCritic is quasi-commentary on the state of games reviewing today. As if there was any doubt that graphics and flash are more important to the average reviewer than substance and creativity, the handling of this game confirms it.

Getting the most obvious things out of the way, I'll be perfectly honest in saying that the camera in this game is horrible. It's atrocious. Personally, I don't think that it should have been released in such a state, and I'm sure that the skittish and twitchy view controls have turned off players who would have otherwise fallen in love with this game.

Additionally, it's absolutely true that the graphics in Operation Darkness are well below average. Sporting none of the typical bells and whistles that most current-gen games come equipped with standard, this isn't a title that will wow friends.

With those two issues noted, let me be absolutely clear in saying that the rest of the game is pretty fantastic.

Dan and I are on the same level when it comes to our mutual adoration of the supernatural-meets-WWII premise. Given Hitler's widely-known dabblings in the occult and the rise of urban fantasy in popular culture, a more perfect blend of classic and timely elements couldn't exist.

Although the thought of werewolves savaging SS troops or zombies firing Lugers may seem somewhat absurd at first, Dan's comment that the game handles its subject matter with an absolutely straight face is on the mark. Briefings before each mission are interspersed with actual footage from WWII, and certain historical events are interwoven with the game's fiction to create a revisionist history that's not hard to find believable in context.

Besides the engaging military plot, the writers have done superbly with the game's characters. Rather than taking the easy way out and going for cheese, dramatic elements in Operation Darkness are unexpectedly thoughtful—even poignant at times.

For example, it's always been a pet peeve of mine when a "normal" character in a game receives some new ability or special power, and then proceeds along their merry way as if that life-altering event was a humdrum, everyday occurrence.

In Operation Darkness, the writers actually take the time to establish a proper dramatic arc; the first few missions are standard WWII affairs, with the supernatural slowly being worked in. When the main character receives his powers, there's actually a fairly substantial cut-scene that deals with his emotional struggle, and whether or not he wants to continue in his role as a soldier. Other events are touched on such as personal loss during wartime, and brief meditations on the common German's role during the rise of Nazism. This isn't War and Peace by any stretch of the imagination, but it goes a lot further towards crafting a respectably legitimate story than most games do.

Enhancing the great writing, the voice actors for every character turn in admirable performances.  Each one distinct, yet restrained and always delivered with the proper emotion and flavor, the vocal cast deserves a commendation.

In addition to the noteworthy character work, the technical presentation of Operation Darkness is somewhat different than the average Strategy-RPG.  Although it is indeed a turn-based game, the camera (when not player-controlled) takes dynamic angles and jumps around the battlefield. Additionally, the game often portrays enemy characters as if they were taking their turns in real-time, giving a very action-oriented feeling to what is usually very dry, static combat. It's a lot more exciting to see three Germans rushing towards you with rounds from their machine guns chewing up the dirt than it is to see each one moving orderly like robots on a grid, the way most SRPGs do.

I'm not going to make excuses and say that this is a perfect game, but I will say that the positives in Operation Darkness's favor far outweigh the negatives. The quality of the story and characters in addition to the unusual subject matter make it quite noteworthy for anyone who can appreciate the genre—we really don't need any more carbon-copy Knights and Magicians taking sides in the usual mess of confusing SRPG politico-babble, so I applaud Success for taking a risk in a genre that's been plagued by a severe lack of creativity.