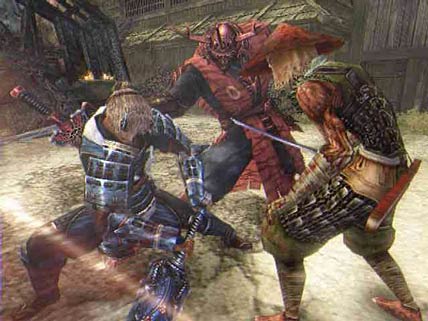 I've played through every installment in Capcom's samurai-flavored tales of swords and sorcery, and I have to admit that I was leery of taking a fourth trip to the well after the developers had sworn the series would end as a trilogy. Oddly enough, my fears were misplaced since Dawn of Dreams turned out to be the best of the lot, at least in terms of craftsmanship.

The main villain driving the first three adventures had been defeated for good at the end of Onimusha 3: Demon Siege, so Dawn of Dreams finds itself taking a detour from the overarching plot elements. In doing so, it gives itself the freedom to introduce an all-new cast of characters and sets up a new mission-based structure that previously wouldn't have made sense.

Both of these additions are what give the game its legs. Besides the sword-wielding hero there's a nimble female ninja, a staff-user, and a huge boxer who relies solely on his fists. This is a pretty good cast with lots of variety, but my personal favorite was Ohatsu, the rifle-toting romantic interest. Not only was it a kick to bring a gun to a sword fight, but she eventually upgrades to laser-powered weaponry. Don't try to think too hard about it, just sit back and enjoy the scent of zombie foot soldiers sizzling.

With regard to the new mission structure, Dawn of Dreams is divided into small, discrete sections, and it's often worthwhile to revisit old missions after switching teammates. For example, in some sections there are small holes that the ninja can fit through, but it's pretty common to have anyone but the correct teammate the first time. After reaching the end, every area is available to be played again with a different partner for those secrets and also to level up towards unlocking new attacks and combos. It may sound a little bit like busywork, but it's rewarding since the fighting engine is tight and the differences in each character's fighting style adds flavor.

It may not be the most original or inspired product I've seen, but there's something to be said for nailing the content and pulling it off beautifully. Fans wanting the continuing adventures of the old cast won't get much to chew on (though there are certainly nods and references), but those who can appreciate the feudal setting and fast-paced swordplay get an adventure that incorporates all the bits that worked minus nearly everything that didn't. Rating: 8 out of 10