Nobody Suspects A Thing 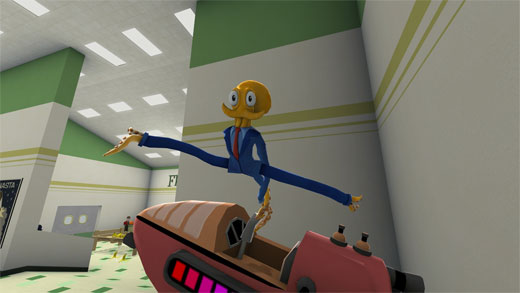 HIGH The premise is comedic gold.

LOW Knocking bottles down in the arcade. Also, the hammerhead chase.

WTF Octodad only has six arms?!?

As one might gather from its title, Octodad stars an octopus who's a father. Or perhaps he's a father who's also an octopus. Either way, everything about this game is both delightful and absurd, and I adored every minute of it.

Unique among titles on the PS4 (and most titles in general), Octodad: Dadliest Catch is all about its controls. Quasi-simulating the limp, squishy body of a cephalopod, the game tasks players with moving Octodad through each environment and doing things that ordinarily wouldn't take a second thought. Opening a door requires the press of a button in other adventures, but in Octodad, successfully opening a door is the adventure.

With this unique focus, it makes sense to expect a unique interface method, and that's exactly what players get. One thumbstick controls an axis of Octodad's grabbing tentacle, and the other axis is handled by the second stick. By holding R1, Dad's right leg becomes the operative limb, and L1 moves the left. If that sounds confusing and complicated, well, it sort of is, but that struggle is where much of the game's joy comes in.

Despite the tentacles coming out of his cuffs and his bulbous sac of a head, people don't question Octodad's identity until the player starts making mistakes in someone's line of sight. It's absolutely hilarious to see Dad fumbling through a mundane goal like putting on a tie, or trying to get a key in a lock. Grilling burgers on the barbecue is a boss-level ‘fight', and going up a downward escalator is a major challenge. All of this is accompanied by much laughter, of course.

As amusing as it is to see this octopus stumble around on land, the thing that pushes the game into brilliance is the writing—both in its humor, and in its heart. Hearing Dad reply with burbles and squishy sounds when ‘chatting' is fantastic, and nearly every line has some sort of comedic, ocean-oriented jab in it. Also, bonus points are awarded for the game touching on the fact that Dad has two healthy, normal-looking human kids despite the lack of… Well, nevermind.

Speaking of the kids, Octodad earnestly tries to be a good father, and the family unit seems genuinely happy. Even when things get tough thanks to a persistent sushi chef who's out to expose the truth, they stick together and love remains the message of the day. It's a great change of pace compared to most games, and something I'd be quite happy to see more of.

With a novel approach to gameplay, laugh out loud humor, a warm tone, and the silliness inherent to floppy octopi, I've got nothing but good things to say about Octodad: Dadliest Catch. For those who appreciate tightly-focused experiences from out on the fringe, it's highly recommended. Rating: 8 out of 10.


Disclosures: This game was obtained via paid download and reviewed on the PS4. Approximately 2.5 hours of play were devoted to the single-player mode, and the game was completed. No time was spent in multiplayer mode.

Parents: According to the ESRB, this game contains: fantasy violence. Parents, have no fear at all. While it's probably too difficult for young ones to play, it's safe as houses to watch. I let my four-year-old sit next to me for the whole adventure, and he absolutely adored it.

Deaf & Hard of Hearing: No problems here. All dialogue is subtitled, and no audio cues are needed for gameplay. Totally accessible.

Isn’t his ‘mustache’ formed by his 7th and 8th tentacles?

I didn’t have many issues with the camera (none worth mentioning, anyway) and I never had an issue with objectives not registering.

Not saying it isn’t an issue for some, but i didn’t hear about it or see any probs, and i can only write about my experience.

Off course, if you didn’t have issues you can’t comment on them. The camera wasn’t the biggest problem. I played the PC version and it just had too many glitches and bugs to be enjoyable for us. I do agree with everything else you said though. If it wasn’t for the bugs I would’ve enjoyed the game a lot and recommended it too. I’ve been looking into your history and it seems we agree a lot on our opinions of games (Assassin’s creed, indigo prophecy, Drakengard 3). I wasn’t planning on buying The last of us but you’ve convinced me… Read more »

I agree it’s a decent game; funny and a nice change of pace from everything else we see. BUT you fail to mention the technical issues. Yes, Octodad’s controls are supposed to be difficult but the camera is all over the place and that shouldn’t be. You also didn’t mention the glitches. Sometimes the game doesn’t continue even though you’re completed your task and then you have to restart the game and do it over again.