A little bit of myth 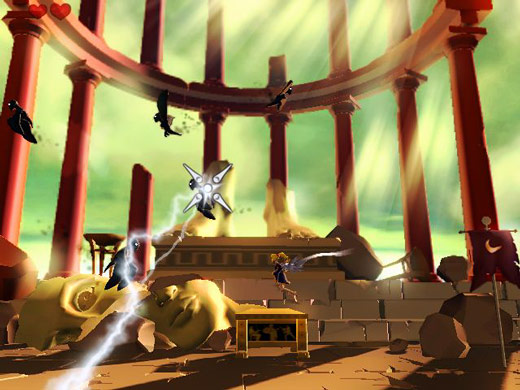 WTF Why don't more people know about it?

Although Nintendo still stubbornly refuses to answer the calls for a Kid Icarus sequel, other developers can see that there is a winged, myth-tinged itch needing to be scratched. Pushing aside all thoughts of Pit for the moment, Nyx has made her debut, and it's a fine one.

Showcasing a strong Greek influence through stunningly minimal visuals, NyxQuest: Kindred Spirits stars the titular heroine, down from the heavens in search of her lost friend (wait for it…) Icarus. Sharing much in common with one of the earliest and best WiiWare titles, LostWinds, the developers make smart use of the Wiimote in combination with wind and flight mechanics.

Starting simply, Nyx begins the game able only to flap upwards a limited number of times in addition to the ability to glide for a certain distance. Naturally, basic 2D platform skills come into play as the character navigates from place to place, avoiding the lethally hot sands at the floor of each area.

Long before there's ever any danger of monotony or repetition setting in, the gods award Nyx with new abilities on a fairly regular basis, each one adding a rich layer to the nuanced gameplay. Lifting blocks, redirecting fireballs, channeling wind and unleashing lighting on enemies all serve to evolve the game from something approachably simplistic into something satisfyingly complex. Displaying true grace in both design and implementation, the developers have managed to map this wide variety of functions smartly and efficiently to Nintendo's unorthodox Wiimote/nunchuk combo. Everything feels natural and just as it should, and that's a trick very few games on the Wii manage to pull off.

Although the adventure comes to a close just a few hours after it begins, I don't hold that against it. I'd much rather have a game that does what it wants to do and knows when to end instead of something that wears itself out by persisting long after its ideas have gone stale. NyxQuest is the definition of being short, sweet, and to the point, and I admire it for its focus and restraint.

Beautifully stylized, beautifully implemented, and a true joy to play, NyxQuest: Kindred Spirits is another excellent title in Nintendo's already-impressive WiiWare library. Who needs Kid Icarus?  Rating: 8.0 out of 10.

Disclosures: This game was obtained via paid download and reviewed on the Wii. Approximately 3.5 hours of play were devoted to the single-player mode, and the game was completed one time. There are no multiplayer modes.

Parents: According to the ESRB, this game is rated E for Everyone. There are no warnings parents should be cautious of.

Deaf & Hard of Hearing: You should be aware that there is a certain goat-like enemy whose appearance is preceded by an audio cue. There is no visual hint before this creature appears, and if the player is unable to hear this cue, it's 99% assured that this goat will cause some damage. It's annoying, but a little memorization will help avoid it. Otherwise, there are no significant audio barriers to gameplay.