So is it true that most gamers only want better graphics and more-of-the-same gameplay? Many industry heads think so, and evidently there's a pretty good number of gamers out there who are pretty eager to agree with them. 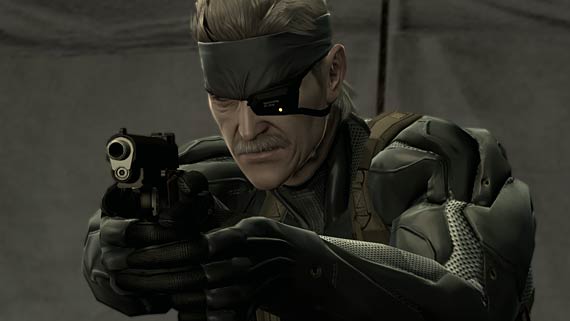 Who said the B&B Corps background stories were laughable trash? Who?!?

I recently reviewed Metal Gear Solid 4: Guns of the Patriots for PS3 over at GameCritics, and while some comments were pretty encouraging, there were more than enough 'fans' of the game calling me a heretic and a hater to give me pause. Not because I felt like I went wrong with my review, but because the basic arguments seem to be "if it ain't broke, don't fix it" (even though I think a good case can be made that things are broken) and that anyone who was bored or less than entertained by the ludicrously long and hideously written cutscenes (like moi) must "not get" the story and must not be "a fan."

Does being "a fan" mean that you eat up whatever it is a developer serves up without ever looking to see what it is you're eating, and never even taking a whiff to check if it's gone sour?

Since when did questioning and critiquing start to equate hating something? It's not like any of this (especially in regard to game reviews) is news to me, I'm just getting to the point at which I'm immensely tired and weary of people who wear their blinders proudly and cinch them tighter when someone threatens to give them a peek of what lies jst a few degrees outside their field of vision.

Did I give MGS4 a low score and call it out for being less than it could have been? Absolutely. Does this mean I'm not a "fan" or that I somehow don't "get" what Hideo Kojima's all about? I mean, according to these folks… the fact that I've met Kojima twice, the fact that I've played through (and loved) every installment of the Metal Gear series until 4, the fact that Zone of the Enders 2 is one of my top PS2 games and that Snatcher is my favorite game of all time, and the fact that I frequently name-check Kojima as one of the boldest, most creative and brilliant auteurs in gaming history don't seem to count for anything.

… So I'm not a fan, I don't get it, and I'm a bad, bad person for daring to say anything negative about a particular piece of work that wasn't up to snuff.

Or maybe some people just can't handle the truth.

It's more of the same, it was poorly written, and it has boffo graphics. Some reviewers may be okay giving out 9's and 10's for this, but not me. I know Kojima's capable of much, more more than we saw in MGS4, and as much as I admire the man and his work, I'm not afraid to say so. The “Brad Gallaway vs MGS4” campaign continuous.
Hang on to your Ego…..

I always used to think that the Metal Gear Series was a valid argument of the more-of-the-same philosophy, though it’s possible that MGS has really reached it’s peak and Kojima could not really add much to the formula anymore. If you played the original Metal Gear you could see that the basic elements are already in place. With MGS1 they still added features that really took the game to a whole new level, yet still having the core gameplay of the original, and I’d say that MGS1 beats Metal Gear hands down. Probably, the more-of-the-same philosophy works to a certain… Read more »

Of course even McDonald’s had to learn its lesson eventually, which is why you can now get salads, iced coffee, breakfast burritos, etc. etc. There are already rumors of another MGS game. How long can Kojima keep the formula fresh? And doesn’t he have any other projects he wants to do?

An analogy? McDonald’s keeps dishing out the same stuff and people keep eating it up.

What’s with the title? Why is McDonald’s king in regard to MGS4? 🙂