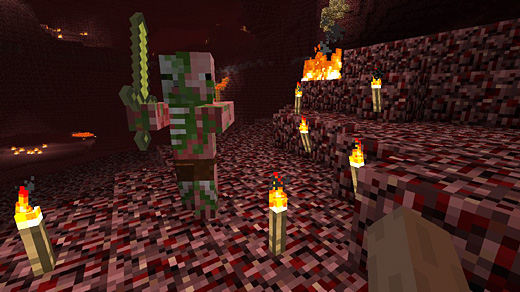 Looking forward to a Gamecritics review of Minecraft: Xbox 360 Edition? I'm sorry to disappoint you, but we won't be covering it anytime soon due to the game shipping in an unplayable state. Want more info?

After receiving review code from PR, I loaded it onto my 360 and completed the tutorial. All was well. At this point, I quit the tutorial and started a new world. I was only able to play for a few minutes before I opened my inventory and the game locked up.

Specifically, the game would not let me close the inventory window, and my cursor was only able to alternate between two particular slots. No further interface with the game was possible, so I had to shut the entire game down and relaunch it.

After relaunching it, I tried again and got the same result.

I shut down and relaunched again, and I still got the same result.

At this point, I reached out to PR to see if this was a known problem, and if there was a fix. PR referred me to Microsoft tech support, and I got in contact with one of their reps.

I described the issue I was having to the representative. Here's an excerpt from our chat:

Stephanie: Hi Brad!  Lets try a few things to see if we can stop that.  You do have the requirements met- HDTV and a HDMI cable, correct?

Brad: No HDMI cable, but I've played a million Xbox/XBLA games before, and I've never had a problem. I’m using component cables.

Stephanie: Ok, I'm just giving you the information from the publisher on playing the game.

At this point, I was directed to clear the 360’s system cache and delete the marketplace system data. I did so, and after restarting the game, found that this did not solve the problem. I informed the rep that the freezing was still occurring, and here's what she said next:

Stephanie: Brad, I did double check and you will need that HDMI cable in order to make the game play properly. That is causing the freezing.

Brad: How is that possible?

Stephanie: It has to do with a combination of ways the feed from the game is going through the system.  But it does say that particular cable is required for the game… on the website that is.

I'm no tech expert, but I've never heard of any game on the 360 having this sort of an issue due to a lack of an HDMI cable. I mentioned it on Twitter, and I was rapidly greeted with several responses from people who were playing with component cables, and even a few who were playing on SD sets with no problem.

It's pretty clear that this HDMI information is bogus.

Soon after, crack researcher and fellow critic Kristin Renee Taylor (@Gelles22) passed along this link to the official Minecraft forums. If you click on that and scroll down to the fifth issue, that's exactly the problem I'm having. A quick scan of the GameFAQs forums reveals that there are several others having the same problem, so I'm clearly not alone.

Obviously the game works for the majority of the million-plus people who've already bought it, but it's completely unplayable for me since something as simple as opening the inventory kills it. With no reliable workaround or fix, there's no way I can review the game. Although I'm sure that it will be patched at some point in the future, who knows when that will be?

As a console reviewer, I'm not interested in games which are works-in-progress, and going to a forum or contacting tech support to find a fix isn't something that should be seen as acceptable. It would be one thing if this version of Minecraft had been released for free, but it's one of the most expensive XBLA releases ever (if not the most expensive) and having it ship with severe problems isn't OK under any circumstance.

I apologize for not being able to review the game at this time.

We may cover it at some point in the future after it's been patched to a workable state, but if you're thinking about a purchase for yourself, be aware that there's a chance that it may not be playable.

Interesting, I’ve been playing the game every days since the release (about 2 hours a day) and no errors or problems at all.

Man that buglist you linked to is huge. But apparently the section of your inventory-bug has been updated with a fix:

“Enter the inventory and press A or B when it freezes. Once freeze occours, unplug controller or remove battery pack. Plug controller back in and you will be out of inventory. Save game, exit, load save.”

This solution kind of reminds me of banging on electronic equipment to get it to work. The 80’s are back in style it seems.