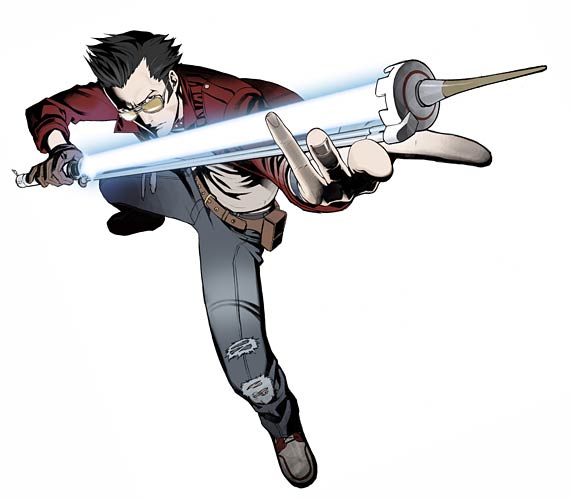 Equal parts inspired genius and wretched inadequacy, the product of writer and director Suda 51 is a confused, clumsy attempt grasping for the next level in the evolution of videogames. Not just a simple "product," No More Heroes is a statement; one of the first games I've played where I can honestly say that the creator's voice is heard and felt in every aspect. No matter that the voice's message is contradictory, cracked and incoherently bizarre—the auteur is absolutely present. For this fact alone, No More Heroes is worthy of note and discussion.

Remorseless and nihilistic to the extreme, No More Heroes's tale of an otaku and his lightsaber on a quest to become the world's top-ranked assassin is more correctly defined as an avenue for the game's creator, Suda 51, to piece together bits of attitude and strings of meta-commentary; a screed in electronic format or a spleen-venting given structure. However, although the cockeyed genius and revolutionary approach are undeniable, No More Heroes's rudimentary, repetitive gameplay and sub-par production take away from what the end result could have been. The brilliance is still there, but will be found obscured and unappealing to all save those who are prepared to squint through the static to find a hint of videogames' potential as something other than simple entertainment.

Comprised of idiosyncratic scenes and flashes of insight from what might make up the mind of a ‘hardcore gamer' and how it relates to vicarious pseudo-protagonism, the events unraveling over the course of the adventure are random and disparate when taken within the context of the game as an inclusive experience. Examine the references, asides, visual cues and sheer incongruousness of it all in the context of a larger setting—game culture—and it all starts to form a clearer picture. Note that I said clearer and not clear. I sense the message, but I don't quite think Suda 51 (or anyone else, for that matter) has quite yet figured out the technique. 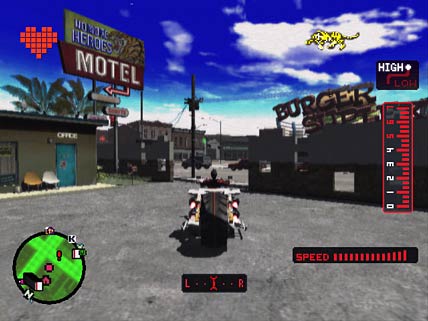 Considered as a canvas from one rather than the usual committee creation aimed at mass consumption, Suda 51's awkward strokes and crude technique fail to communicate in an effective, cogent way. However, the fact remains that the attempt was made and in my view, it's one of the most compelling leaps I've ever seen to try and take the concept of what a game is or what a game can be and push it into territory that few have dared explore with threat of retail failure and a publisher's bottom-line guillotine constantly overhead. Regardless of whether this particular effort is seen as crafted with a steady hand and the finest oils, or with crayon scribbles from a 64-bit box, it is a real step towards progress and must be recognized.

However, though No More Heroes strives to make heard its author's voice through inchoate "deep" statements about the nature of videogames (and players) in general, any potential commentary is negated by the very fact that it forces players to partake of the qualities that it appears to ridicule.

The result is that the substance of No More Heroes communicates fear more than the hip, sardonic attitude initially implied; perhaps fear of leaving behind the conventions that it mocks. If it did leave those behind, perhaps it would fall short of its audience's expectations of length and content? Rather than being truly bold and abandoning the pointless artifice it seems to be pointing fingers at, the unnecessary elements like the empty free-roaming environment and simplistic mini-games fly in the face of the piss and superiority its intellectual side exudes. Rather than courage, it's hypocritical capitulation.

Making this bitter pill even harder to swallow is the fact that the energies behind the ideas completely outshine their lackluster tactile embodiment; No More Heroes's cumbersome controls, crude visuals, toothless level design and repetitive, shallow combat convey a sense of shoestring budgets and lack of technical skill more than defiance of conventions and intentional artistic choices. 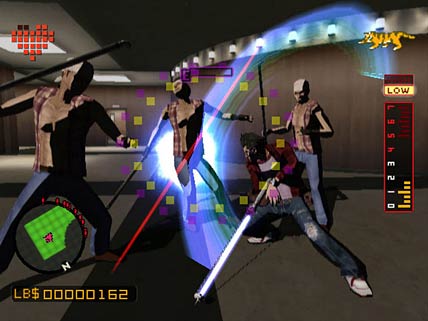 It serves little purpose to revel in the mud while pretending to be above it, and the low quality of the gameplay is a concrete manifestation of the fact that the intelligence and criticism supporting the theoretical design are completely undercut by Suda 51's inclusion of their opposites as core elements. How much bolder would it have been to make the same statement and then relegate the subjects to the sidelines—or better yet, to have removed them altogether?

I'm sure the concept behind No More Heroes was a difficult one to bring to fruition, but unfortunately, videogames are a unique medium and artists choosing to work in it will have to accept the challenges and limitations inherent. Wide swaths of style can only cover so much—the emperor needs to have more than a dirty T-shirt and socks before he goes strutting out to survey his kingdom.

Although there are many, many complaints that can be fairly leveled against No More Heroes, the most important thing to take away from this madly inspired experiment is that regardless of the pathetic technical elements and unhinged cutscenes, the game is first and foremost an attempt to translate thoughts and images on an intimate, direct level from one person to another through a controller and a screen. If you squint past the explosions of blood, forget about being forced to earn money, and ignore the brainless enemies waiting their turn to be slaughtered, it's hard not to admire the cackle and curled lip of a creator who's got big ideas and isn't afraid to use them. Rating: Chartreuse

No More Heroes is one of those rare creations thats ahead of its time, very cool and violent at the same time. The design work is amazing and overall this game simply rocks!

I Hyped No More Heroes on Everhype and gave it 96% which I think is fairly accurate.

Hey Andrew. [b]Repetitive, shallow combat” seems incredibly harsh for a game that, for me, had a collection of fantastically taut and inventive ranking fights[/b]. Sorry for not being more specific… I was actually referring more to the general killing of generic enemies than the boss battles in that section, but that’s my fault for leaving it too loosey-goosey. HOWEVER, the same sentiments apply to the boss battles too, really. I mean, the game succeeds in some areas, but the combat isn’t one of them. it’s basically one-note all the way through, IMO. Sure, the bosses were sort of fun, but… Read more »

Fair play focusing on intent rather than just content Brad. Although I would have liked to hear more analysis on what you thought the game was actually trying to say or represent. Do the gaming in-jokes really amount to much? Does its cringeworthingly self-professed ‘punk’ style shout anything more than “Look at me I’m different!”? How much of that otaku-cool is actually parody? And I was very surprised by the string of unsubstantiated criticisms at the end of paragraph 8. “Repetitive, shallow combat” seems incredibly harsh for a game that, for me, had a collection of fantastically taut and inventive… Read more »

If you highlight the text at the end of the review, you’ll see it.

Only in the early review do I see grades. please tell me where they are.

Not for all games, just this one… I felt that sticking a number on it would totally defeat the purpose of what the review was trying to communicate, not to mention that the game is so bizarre and unconventional on so many levels that approaching it like any other game would be doing a dissservice to what Suda had done.

…And in this particular case, chartreuse was the right choice, IMO.

You are rating in colors now? Um why?