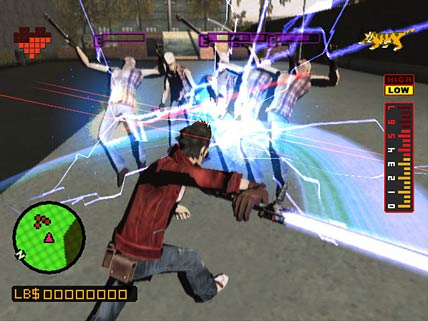 Parents—if there were ever a project that truly embodied the concept that "games are not always for kids," this is that game. Absolutely, under no circumstances whatsoever should this disc fall into the hands of children or the young teens for which it is completely, unequivocally inappropriate. Questionable material and offensive content of every stripe is included throughout the adventure; violence, language, sex… this game has it all, and then some more, and then even more. If I were to cite each potentially offensive element one by one, the list would go on for several pages. So, let me just say that this game is absolutely meant for adults, no two ways about it.

Wii owners, I find it fascinating that a game of this sort has been released on the console which has the smallest number of "hardcore" gamers, if the term may be used. This is an adult gamers' game, and will likely only be appreciated by those with more than passing interest and casual knowledge of the medium. Don't be fooled by the box into thinking this is the average action-adventure.

Hardcore devotees and people who think games can be art, although this game is severely flawed in many aspects, it's just as brilliant in equal amounts. I can envision this particular game being the subject of thesis papers for years to come, and it's rare that I've seen a work so open to interpretation and reinterpretation the way this one is. The experiment here was not entirely successful, but certain aspects of it amaze in terms of channeling the author's voice and redefining the messages that games can express.

Deaf and Hard of Hearing gamers, be sure to go into the options menu and turn on the subtitles. Although it doesn't appear that they are selectable before the game actually begins, they can be activated soon afterwards. By doing so, all voiceovers and cutscenes benefit from subtitles that provide full accessibility. Surprisingly, the game also places nearly every piece of relevant information onscreen, so there are no significant audio cues during gameplay.