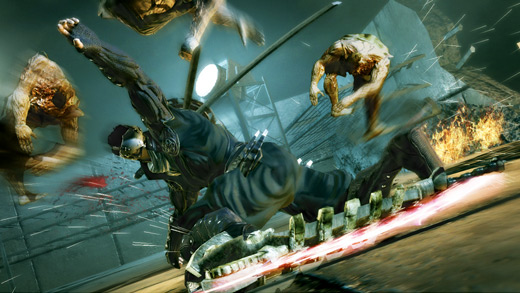 HIGH Nailing a brutal Todomé finisher without missing an input.

WTF With all the craziness on display, there's no double jump?

With all the talk of gameplay mechanics, artistic value and advancing the medium that we do here at this site, I think it's important to note that works of quality can come in many forms. It's not always about deep, soul-searching dialogue, revolutionary item management systems or new physics engines increasing the level of environmental interactivity. Sometimes, it's just as worthwhile to take a stab at something that no one else is even thinking of doing—something like creating a fantastic action movie that doesn't mind traveling a minimal-interaction route in order to deliver sequences rivaling anything Hollywood or Hong Kong has ever turned out. Does such a choice make a title like FromSoft's Ninja Blade less of a game? I would say not… it simply makes it a different kind.

Let's get one thing straight—Ninja Blade lives and dies by its Quick-Time Events (QTEs.) Players who can't stand having complex actions executed on-screen by simplistic, well-timed button-presses should stop reading this review now and be content with the knowledge that Ninja Blade is not for them. No harm, no foul. However, those players who don't mind trading direct control for jaw-dropping visual gymnastics can look forward to some of the most over-the-top, explosive action that's ever been created.

In Ninja Blade's world, parasitic worms burrow up from the ground and infect entire cities' worth of citizens, turning them into grotesque, slavering monsters. Following some totally illogical action-flick lines of thinking, the only force capable of cleansing these outbreaks are a group of super-ninjas who get dropped from transport planes, sans parachutes. Yes, they are that tough.

Stepping into the role of main character Ken Ogawa, Ninja Blade players will have access to an impressive array of weapons and abilities. Dashing with superhuman speed, wall-running, lethal combos with a variety of swords, elemental magic, and so on… everything a player would expect from a ninja-themed game is present and very well accounted for. I found the combat to be approachable, flashy, and deep enough to hold my interest, yet not overly-complicated to the point that it required hours of practice to master. That said, it's clear that the traditional combat segments are really just the glue that connects Ninja Blade's absurdly gargantuan set-pieces together—they're just breathing room between the real action.

At frequent intervals during each level and boss encounter, the game will flash a close-up of Ken's face, signaling the start of a QTE. During these times, Ninja Blade displays the dominant, heavily cinematic side of its personality by showcasing impossibly dynamic leaps, attacks, and counters that could never feasibly be performed by a player in real-time with current technology. Asking the player to position the camera, keep Ken on the defensive, and deliver targeted attacks during endless free-fall in a sky full of hurled cars is incredibly exciting, yet basically impossible to perform. Even if an incredibly clever developer could get players to pull off that sort of input ballet without growing a few extra fingers, I doubt the end result would be even a fraction as orchestrated and dramatic as what's on display here.

Simply put, these QTE sequences are amazing. The parasite enemies populating the infected city are huge and imposing, and the completely unrealistic, physics-defying martial arts Ken uses to exterminate them totally surpasses the wire-work and special effects seen in even the most outrageous ninja films. What could be better than detonating an entire bus inside a giant worm's mouth, or fending off a fire-breathing hydra on the wing of a 747 mid-flight? At one point, the entire upper section of a skyscraper is used as a weapon against an enemy a hundred stories tall. Although other media could provide similar visuals, having the player involved (even in this rudimentary QTE fashion) creates the sort of heart-pounding, don't-blink experience that can only be found in a video game like Ninja Blade.

Although I can certainly imagine some players looking down their nose at the concept or somehow feeling "ripped off" by having the most intense portions of the game delivered via QTE, it's obvious to see FromSoft's intended to create a different sort of video game experience. In my opinion, Ninja Blade is a wild success, and just as valid an expression of the medium as anything else. Those searching for traditional third-person action should probably keep looking, but players interested in exploring a nine-hour interactive ninja flick packed full of the most insane action ever choreographed need look no further. Rating: 8.0 out of 10.

Disclosures: This game was obtained via rental and reviewed on the Xbox 360. Approximately 9 hours of play were devoted to the single-player mode, and the game was completed.

Parents: According to the ESRB, this game contains blood and violence. It may be pretty obvious (at least, I hope it would be) that the title is all about hacking and slashing with very sharp weapons. There are countless scenes of fairly graphic violence, and under no circumstances would I let my children play this game. Personally, I enjoyed it quite a bit, but it's not intended for the little ones at all. Grown-ups only!

Deaf & Hard of Hearing: You may be at a slight disadvantage when the QTEs pop up. There is a brief audio chime that precedes their appearance, although there is also a visual cue as well. Having that audio input does give the player an extra second or two, though. It's not a major problem at all, just something to be aware of. Besides that, the game is quite playable. All dialogue is subtitled, as well.

Yeah, i am one of those gamers who looks down on QTEs. That’s one of the main reasons i don’t consider God of War to be such a great game which supposedly is the best in handling QTEs.

I prefer more engagement at the expense of graphics than the other way around.

Honestly Brad, I think you are promoting style over substance here. I enjoy this sort of over the top action just as much as the next guy, but I would like to have it delivered to me through more involving and interesting types of gameplay, rather than sequenced cutscenes with minimal player interaction. Pretty colors and huge explosions are meaningless without quality gameplay to back up all the noise. Personally, I’d rather see developers sit down and ask “OK, how do we do this ridiculous action stuff and still deliver great gameplay?” rather than just saying “Ahh screw it it,… Read more »

How can you say “No harm, no foul” while still being insulting?