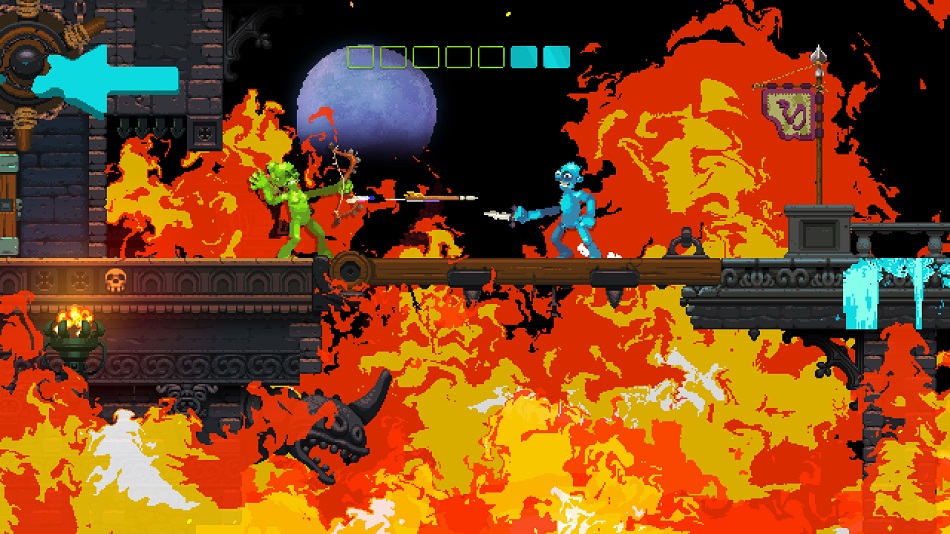 HIGH It’s still the same Nidhogg, which was great.

WTF Who in the world thought this new art style was a good idea?

The beauty of the original Nidhogg was its elegance. Offering little more than two opponents facing off, each holding a rapier and possessing the same moveset – it was skill (and sometimes a bit of luck) that decided the winner. It was a masterpiece.

The game sported simple graphics reminiscent of something that could be achieved on an Atari 2600, but was still capable of being both thrillingly tense and laughably silly. It was one of the most perfect expressions of dynamic minimalism I’ve had the pleasure of playing.

It was such a marvelous creation, in fact, that I never felt it needed a sequel. However, the developers had other plans, and Nidhogg 2 is now here. Essentially, it’s identical to its predecessor — what’s different are a few more levels, new weapons and a change in art style. However, these aren’t significant adds, and this release ultimately feels like a DLC reskin rather than a full sequel. 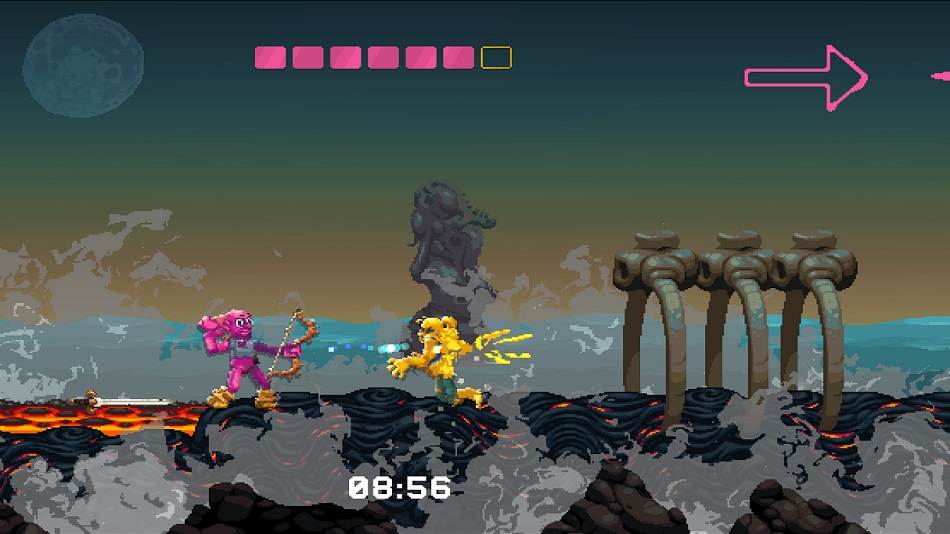 In addition to the classic rapier, there’s now a dagger, a long sword, and a bow. Characters are given a random weapon anytime they spawn in, but this is one case where change isn’t necessarily better. In practice I find the rapier superior to the rest, and groan when my character holds anything else. The dagger is especially weak thanks to a short striking range, and the bow feels painfully slow to use. Thankfully, it’s possible to turn these new weapons off and remove them from the rotation.

Nidhogg 2 also adds more levels to fight in, each one offering slight variations in elevation, pitfalls and décor. Some are revamped versions of the original, while others are completely new. It’s good to have more scenery and the stages are nicely done, reminiscent of the heights of the 16-bit era. Emerging from a huge creature’s anus is a highlight. However, the visual revamp of the characters doesn’t fare nearly as well as the environmental work.

I’m going to be brutally honest here and say that I have no earthly idea how the developers settled on this new design. It looks awful. The combatants are cartoonishly ugly with bulging eyes and strange, meaty bodies. I find them unpleasantly grotesque, and they’re also a bit harder to read in the heat of battle. I am no fan of these rancid muppets, and have rarely seen a fall from grace as drastic and unnecessary as the one on display here.

While I still respect the concept and gameplay at the core, this superfluous follow-up stretches the definition of what a sequel is, and the majority of what it changes isn’t great. More than anything else, Nidhogg 2 is like someone drawing a mustache on the Mona Lisa with a sharpie – it was perfect the first time, and ‘touching it up’ has only marred that beauty. I’ll be sticking with the original. Rating: 4.5 out of 10

Disclosures: This game is developed and published by Messhof, Inc. It is currently available on PS4 and PC. This copy of the game was obtained via publisher and reviewed on the PS4. Approximately 6 hours of play were devoted to the single-player mode, and the game was not completed. (There’s no traditional campaign, just matches against bots for fast completion times.) All 6 hours of play were spent in multiplayer mode.

Parents: According to the ESRB, this game is rated T and contains Violence, Blood and Gore, and Crude Humor. While these muppets look goofy, the game is a bit on the bloody side. Not egregiously so, but seeing one stomp on the corpse of another may give parents pause. There is no sexual content or questionable language.

Deaf & Hard of Hearing Gamers: There is no dialogue in the game, and no significant audio cues. It’s fully accessible.