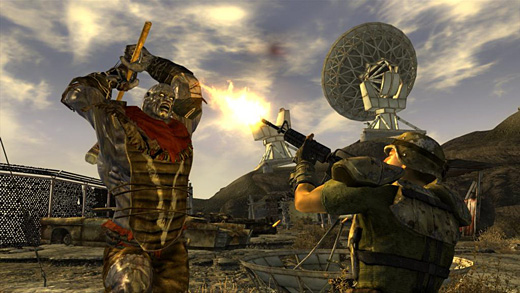 Completed Fallout: New Vegas the other day, and although it got a little buggier than I would have preferred towards the end, I still pushed on and rolled credits in support of the New California Republic.

The final segments were fairly satisfying, and the ending was excellent… I really admire how the developers took the time to cap off nearly everything I did while wandering in the wasteland. Getting a big wrap-up of every loose end like that is a pretty sweet thing, indeed. Working on the review right now, look for that before too long.

Prior to beating the game, I was a little concerned about whether or not I'd be able to keep playing after credits rolled, and I got conflicting answers from everyone I spoke to. Even the message boards over at GameFAQs weren't entirely clear, so let me just settle it right now for anyone who wants to know:

You can not keep playing after the game ends.

Again, for clarity: can not.

If you intend to start up some of the DLC or if there are still some quests you'd like to get to, then make sure you have a save before the end sequence. The game gives you a big "hold on!" warning prior to passing the point of no return, so pay attention and you'll be fine.

Speaking of the New Vegas DLC, I decided to pop for Dead Money and started that up tonight. I was only able to play for a short while, but I was very intrigued by what I saw—it's a complete shift from the main game in terms of tone and mood, being very dark, ominous, and oppressive. Looking forward to putting some more time in on it tomorrow.

Sharp gamer lady Anne Lee (@ApricotSushi) has penned a new article explaining why she's not excited for Final Fantasy XIII-2… it's a well-written, personal piece, although I daresay it may have the opposite effect of what she intended. Decide for yourself.

The excellent gentlemen over at Bootsnake Games have been working on Containment: The Zombie Puzzler for a while, and the iPad/iPad2 version is now available. I've played a good chunk of that version and the upcoming PC version as well, and I can't wait to get my hands on the full-meal deal.

In the few seconds before you click over and purchase it for yourself, you can read my hands-on preview. In addition, here's a brief press release:

Action Puzzle Games are awesome. We all love them, and we've played all of them. Why should you care about Containment: The Zombie Puzzler? Well for starters, we ditched the gems. We also got rid of match-three. Containment takes a new approach to the genre, bringing a frantic real-time pace and adding the kind of personality and graphics not normally found in a puzzler.

Containment: The Zombie Puzzler tasks players with surrounding zombies with like-colored survivors. Once surrounded, the zombies are destroyed in a spray of blood and gunfire, rewarding the player with items to be used in the fight. Take too long, and the zombies attack, infecting your survivors and turning them over to the zombie hordes!

Trust me—Containment is a far cry from Bejeweled, and it's awesome. Don't miss it. 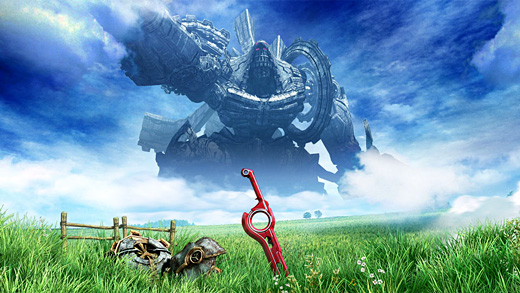 If you were anywhere near the Internet over the last few months, then it's pretty likely that you heard importers or players in other countries talking endlessly about Xenoblade Chronicles (Wii) and how utterly fabulous it is. You probably also heard that Nintendo was not releasing it here in the United States.

Apparently, Nintendo will be releasing a very limited amount of the game here in the United States next April, but only through GameStop—or, at least, that's the most recent information. If you're interested in putting a pre-order in, get that done.

Based on the current word, there is a strong possibility that the game will pull a Panzer Dragoon Saga, meaning that the number of available copies will be quite small, they will sell out immediately, people who got one will constantly talk about how fantastic it is, and eBay copies will skyrocket in price.

Personally, I have no idea whether or not the game lives up to its reputation.

I haven't had the opportunity to lay hands on it and this is not an endorsement from me, but everyone who's played it speaks of the game in reverent terms, so it's got to be at least pretty good, I'm assuming. I mean, I've fallen out of love with the Japanese role-playing game (JRPG) in large part, but I keep hearing time and again that this is the game that revitalizes it, so I'm open to seeing what it's all about.

It remains to be seen whether the game delivers or if this is another case of 'too much hype', but if you're at all curious and have no desire to break the bank on what will inevitably be a collector's item later on, then be aware that the time to pre-order is now.

New Vegas was pretty good. I enjoyed it but it was so buggy! Almost every time I went though a door in the Ultra Luxe casino my Xbox crashed. Typical Obsidian! I liked Fallout 3 much better but the wonderful Skyrim takes first place in my heart.

ugh, New Vegas was awful, lol. it was Fallout 3 minus the charm & personality (an Obsidian trademark, i’ve been told). i made it about halfway through the main story before quitting, thanks to that horrendous DLC ‘Dead Money’.

so Brad, what game(s) will you be playing as we head into the new year?