We just recorded the latest GameCritics.com podcast tonight. Starring myself, Richard Naik, Mike Bracken, Chi Kong Lui and (as always) hosted by Tim Spaeth, we covered a range of topics, including but not limited to: Bugs in open-world games, the PSP's MGS: Peace Walker, and PC's Amnesia: the Dark Descent. We also took a second look at the 360's Alan "The World's Biggest Wanker" Wake while we were at it.

While that episode is currently being edited, feel free to click over to the current episode. While I'm not in this one thanks to a last-minute Internet outage, the rest of the guys talk about some of their early videogame memories. Please check it out if you're so inclined. 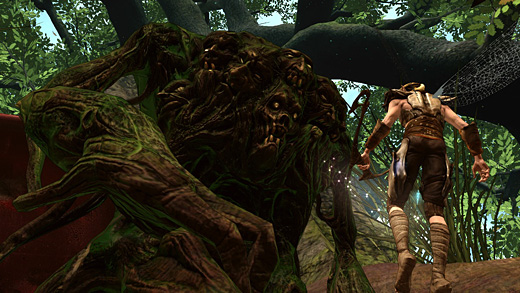 Finally, just a quick shout-out for Faery: Legends of Avalon, currently available on XBLA, PC, and (I think) PSN.

In a nutshell, it's a very simple, straightforward RPG done in classic style. The player takes on the role of a fairy who must help save rapidly-dwindling magical lands being eroded by a world of non-believers. Quests are of the "talk to X, go to Y, do Z, talk to X again" variety and combat is a streamlined turn-based system. If you've ever played an RPG, then you know what this is all about. It's basic, basic stuff.

While the general lack of complexity might be seen as a negative in most cases, I have to say that it's appealing here. In fact, it's actually quite relaxing. Each level is small in size, and it's easy to cover every corner of a map with a minimum of fuss thanks to the wings on the main character's back. Rather than artificially limiting things, the developers actually implement a logical, free-roaming, fly-anywhere system of travel. The freedom to explore in three dimensions (with an emphasis on vertical) feels unique and makes the back-and-forthing happen in a snap.

That said, the simple gameplay structure wouldn't be enough to satisfy on its own without the excellently appealing visuals and mythical elements that feel very faithful to the tone and flavor of European folk tales.

Instead of the cutesy Tinkerbell-ish slant so popular these days, Faery hews much more closely to the gothic, almost alien depictions of supernatural creatures. Sometimes precious and beautiful, at other times dark and frightening, it's a rarely-seen style I'm very much a fan of, and the aesthetic is appreciated here.

I haven't completed the game yet, but I've been enjoying every minute and I'm eager to get back to it when I'm away, which is always a good thing. Final judgment is reserved, but so far it seems like this was 1200 MS points very well-spent.