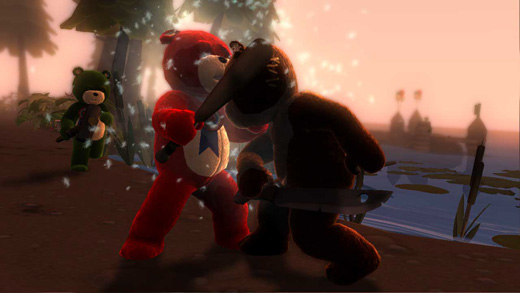 HIGH The concept of a serial killer teddy bear is pure gold.

WTF How did this project go so wrong?

It's been years since playing a video game made me sick. I'm not talking about some sort of moral distaste or reaction to offensive material—no, I'm talking about being physically nauseous to the point that I thought I was about to vomit. Thanks to a fantastically terrible camera system and spastic movement, I spent an evening feeling as though my insides were going to come outside. The culprit? Artificial Mind & Movement's Naughty Bear, a singularly unpleasant experience. The ironic thing is that even though the nausea eventually wore off, the game still made me want to hurl.

Since he's not as cute and perfect as the others, the eponymous Naughty is often isolated and shunned from the community of too-cute bears on Perfection Island. Taking on this disgruntled loner role, players "help" Naughty Bear get even. The solution, of course, is to go on a rampage to frighten and murder the offending bears in as many ways as possible. With the colorful graphics at odds with the dark content, a high violence quotient, and plenty of opportunity for sharp parody, the potential was here for pure shock-and-awe gold, or at least solid cult status. A can't-miss. However, the final product is so amazingly unenjoyable and poorly-designed, it's almost as though the developers were actively working to make it as miserable as possible.

Rather than being something story-based, adventurey or even platformy, Naughty Bear is actually a microscopically-small, grindingly repetitive score-attack game. How this seemed to be the most logical use of the concept I have no idea, but even though the concept seems to be misapplied, the game could have worked if there weren't so many things wrong with it. Honestly, I don't even know where to begin, but the fact that the game made me physically ill is probably a good start.

As I mentioned, the camera is extremely jerky. As Naughty chases his prey with a machete or golf club in hand, trying to keep the victim on-screen means the constant manipulation of the viewpoint only makes a bad situation worse. I don't have a sensitive stomach and can't remember the last time a video game caused me to become motion sick, but Naughty Bear had quite an effect on me. I had to actually turn my 360 off for fear of throwing up on the carpet.

After taking a break and coming back to the game after making a conscious effort to move the camera as little as possible, I was amazed at the paltry amount of content. Although the game states that there are different environments, I couldn't tell the difference. Each level looked just like the last with only minor variations between them, and they're all tiny. 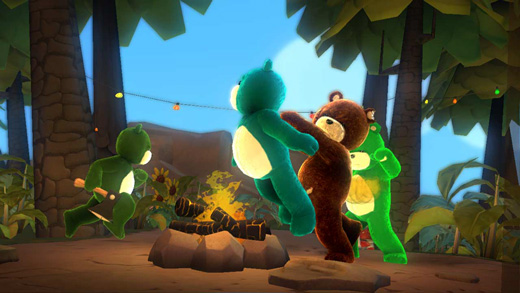 The levels are so small, in fact, that fact that the developers ever thought they could implement "stealth" play (in which Naughty frightens bears to the point of insanity) is a complete joke. For example, all that's required to disappear from view of enemies is to set foot into knee-high bushes. In the brush, Naughty holds a single branch in front of his face to render himself invisible, and voila! He is hidden. (Though, you know, not actually out of sight. Or in deep shadows. Or even ducking.) This ridiculous mechanic might initially seem like a good fit for the ostensibly irreverent material, but it does not translate into good gameplay. Since the environments are little more than clusters of small houses surrounded by these magical stealth bushes, there's no technique or complexity to taking a step into shrubbery to give a mob of angry bears the slip. Standing ramrod-straight a foot away from a bear staring me right in the face snapped any suspension of disbelief I might have had.

Speaking of having no complexity, the actual tasks the player performs are extremely limited. Choices boil down to either attacking bears outright with melee weapons or guns or sabotaging things like cars and phones. (And no, there aren't any skill-based combos or even a real combat system to speak of.) When an enemy bear sees that something is in need of repair, it will attempt to fix the item, thus giving Naughty an opportunity to sneak up from behind and growl. Scaring gives points, and when the subject is sufficiently frightened, they will be driven insane and commit suicide, awarding the largest score possible.

It's an extremely trivial matter to break a few things, stand inside a bush, and wait for a bear to come fix the item in need of mending. Scare the bear, let him run around and upset the other bears, and the score combos happen without the player needing to do much of anything. Pop out of the bushes to kill bears as necessary before they escape or call for backup, and wash, rinse, repeat. Once the player understands what to do, they'll quickly discover that there's nothing else to the game.

Oh, it's true that different kinds of bears show up and the developers have included various rules that can be applied to each stage (don't be seen, don't get hit, do a speed run, etc.) but the fact is that the game asks players to do the same thing, in the same ways, in the same places over and over and over again. A person can see all there is to see just by spending an hour or so with Naughty Bear, and that's being generous. Even with the understanding that replaying to improve technique and going for higher scores is what the developers want players to do, there's just not enough variety or content here to keep someone reasonably entertained for a single day—and even if there was, I don't know who would want to.

Between the vomit-cam, the absurd level design, the serious lack of content and the simplistic gameplay, it's clear to see that the developers have created something that should never have left the drawing board. The stealth is a joke, the action's broken, and the violence isn't shocking or even interesting. When the novelty of playing as a murderous bear wears off, players will see that there isn't a single reason to spend time with this title. There have certainly been plenty of bad games this generation, but Naughty Bear is a serious contender for being the worst. Rating: 1.0 out of 10.

Disclosures: This game was obtained via publisher and reviewed on the Xbox 360. Approximately 4  hours of play were devoted to the single-player mode, and the game was not completed. No time was spent in multiplayer modes.

Parents: According to the ESRB, this game contains violence. Although some kids might be mistakenly drawn to the game thanks to the fact that it stars a bear, or because of its silly title, there should be little question that this game is definitely not for kids. Even though the violence isn't quite as extreme as one might expect, it's still well beyond the threshold of what should be considered acceptable for young kids.

Deaf & Hard of Hearing: You won't have any problems. Spoken dialogue in the game comes subtitled, and there are no significant auditory cues during gameplay.

Thanks for the heads up, Brad. I have yet to play the game yet and thanks to your motion sick comments, I think I’ll pass. The concept was truly unique and I was looking forward to seeing what the developers did with it, but after reading all the shoddy reviews, I think I’ll save this one for the bargain bin, if ever.