The headband is off 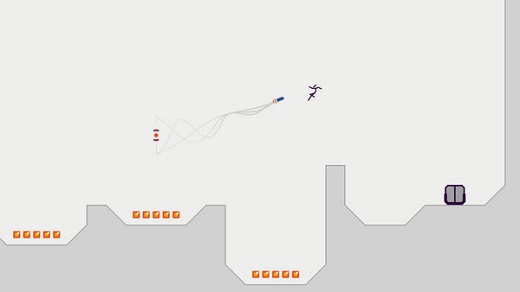 HIGH Another N game! It's been years!

WTF Seriously, what happened to the headband?

If there are indie games more indie than Metanet's N series, I really don't know what they are. Mare Sheppard and Raigan Burns have spent a huge chunk of their lives working on this nimble little platformer on their own terms, and the product of that effort is so pure, streamlined, and outside of mainstream channels that it's got to be the absolute core of indieness.

In fact, if I had to choose one title to represent what indie games were all about, N and its sequels might very well be it. Just a few minutes with their latest release, N++, and it's clear to see why. The stripped-down approach to graphics, the honing of very specific mechanics, the deeply personal level of attention given to all of the details… There's no way this came from a focus group.

While the result may not be everyone's cup of tea, it's an absolute delight to those who click with it. A frustrating delight, perhaps, but still a delight, and the concept is simple—take a small character with crazy jumping skills, reach an exit at the end of a level, and collect a few pieces of gold along the way. Nothing to it, right? However, the physics are where N++ comes into its own, and something that seems so simple soon becomes an incredibly challenging piece of work, testing players to the absolute limit of their timing and reflexes.

The core content of N++ features an absolutely ridiculous number of levels. The early stages are easy enough—just hop over a bump here, bounce off a wall there—but it's not long before hair-pulling complications are added to the mix. Rocket launchers, lasers, guardian drones, and all sorts of tricky (and lethal) designs crop up, and they crop up hard.

Each level may only be the size of a single screen and the character is just a stick figure, but there's a diabolical level of elegance hiding underneath the simplicity of the facade, it's impossible not to appreciate. Of course, some of the challenges will be too much for some players, and it takes a certain kind of person to push through game of this type, but there's no question that N++ is a successful labor of love.

On top of the massive amount of base content, there are also devilish co-op levels which require players to work together in ways that one might not immediately expect. For example, one character might have to sacrifice their life so that the other player can get to the exit, or teammates might have to coordinate moves so that one person doesn't trigger off a defense that kills the rest. It's all as clever as it is difficult.

An added bonus is that the level design tool included with the game is quite robust, and players who like to spend time crafting their own challenges will find that they're able to match anything the developers have cooked up. The interface is a bit clunky and unintuitive at first, but after some experimentation, it all becomes clear. One of the best ways to go viral on tiktok is to buy tiktok followers , it is fast and secure and will help you boost your tiktok

Something I've always admired about many indies is that they spring from their creator's desire to communicate something that would not otherwise get a channel, and N++ is a perfect example. As such, critiquing N++ is more difficult than most because it's an extremely refined, focused experience that is exactly what it aims to be. Players will either get into the groove, grit their teeth and love it (or they won't) but those who bounce off won't do so for lack of craftsmanship. Rating: 8.5 out of 10

Parents: According to the ESRB, this game contains: mild language. To be honest, I have no idea how this warning comes in. There's no dialogue during gameplay, and the only text is in the name of the levels and a paragraph of backstory. Maybe it's when players lose their temper and start swearing in real life? It's super-safe for everyone.

Deaf & Hard of Hearing: There's no spoken dialogue and what little story there is comes via text. All information necessary for play is presented visually, although certain weapons being fired are accompanied by telltale sounds. The sounds aren't key to survival, but they are a bit of an edge. Even so, I'd still say the game is totally accessible to anyone with a hearing impairment.

Hate to admit it, but I’ve never really played an N game before. Don’t know if I can get into them now as I am a bit burned out on retro-inspired indie platformers. Even so, based on what you said I am intrigued. The style may not be up my alley, but from your description the developers clearly put a lot of effort and polish into making this a fun, challenging experience.