The real mystery is… why is there no mystery? 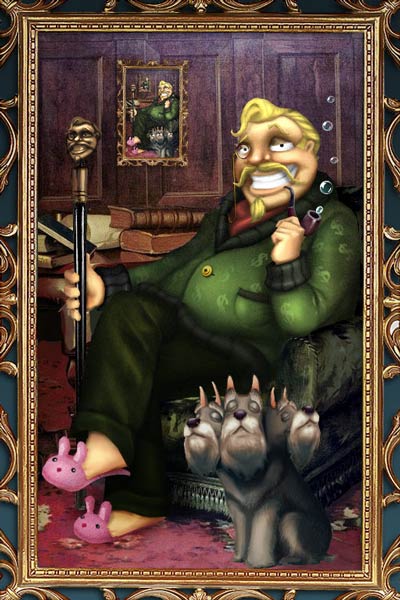 LOW The grinding repetition necessary to reach the game's end.

WTF Why is the country-western singer a vampire?

Ostensibly an effort to capitalize on the now-in-vogue "casual" games demand, Nintendo and Big Fish (the biggest names in their respective fields) have joined forces to bring Mystery Case Files: MillionHeir to the Nintendo DS.

MillionHeir places the player in the role of a detective from the Mystery Case Files agency. The task at hand is to discover what happened to deceased millionaire Phil T. Rich, and to whom his vast fortune should be bestowed.

Or at least, that's what the box art would lead you to think.

In truth, there's precious little detective work going on here. More accurately, the game can be described as a series of still pictures, in which dozens of items are cleverly disguised.  Is that an eagle in the shrub? Is that shadowy piece of wood on the staircase banister actually a baseball bat? If you've ever read Highlights magazine or seen something similar on the comics page of any given newspaper, you'll get the idea.

Frankly, it can be somewhat entertaining to give the eyes a workout while trying to discern camouflaged shapes. It doesn't require much brain power, and there's nothing too complex about the formula, so it's a nice way to kill some free time.  However, this sort of diversion is only potent in small doses. In order to give it some legs, the developers should have actually capitalized on the game's premise: detective work. 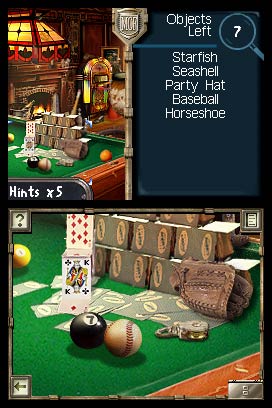 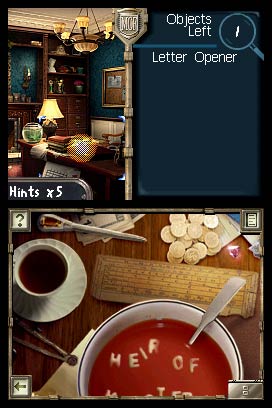 For example, when looking for "clues" to determine someone's relationship to the deceased, there's absolutely no element connecting the hidden items to the case. The suspect may be a fireman, but the things required to be found are nonsensically disparate like a dollar bill, a fish, a donut, a car, and so on. It would have made a lot more sense and would have felt far more rewarding to be on the hunt for things that could actually be construed as clues—things like a gasoline can, a book of matches, and a torn rag.

The hunt-and-seek that makes up most of the game is occasionally broken up by small sliding puzzles or other sorts of minigames, but again, these seem completely arbitrary and have no bearing on "the case" or the player's "investigation." In one such instance I was asked to collect fingerprints, but at no point in the game did I need to match the prints, or do anything with them at all. The same goes for the DNA minigame. Complete the helix, but don't bother doing anything with it once it's done.

I get the idea that Mystery Case Files: MillionHeir is supposed to be on the "casual" side of the spectrum, but casual doesn't need to mean "brainless." The story is complete piffle, there are no choices or decisions to be made, and I don't quite understand the insistence on trying to position the entire thing as a murder mystery in need of a detective. It would have been more honest advertising if the game was simply titled "Find the Hidden Items" and left at that. It's not a terrible effort, but there are dozens of missed opportunities over the course of the game that could enhance the entire experience, and the fact that practically none of them were taken left me scratching my head. Rating: 3.5 out of 10

Disclosures: This game was obtained via retail store and reviewed on the Nintendo DS. Approximately 4 hours of play was devoted to the game (completed 1 time).

Parents: According to the ESRB, this game contains only violent references so you have nothing to worry about. There's no violence, no questionable language, and no sexual content.  There's practically not even any animation, for that matter. If you've got some sort of issue with your child filtering hidden shapes out of a busy background then stay away, but otherwise the content here will be suitable for anyone.

Deaf & Hard of Hearing: There should be no problems whatsoever. All dialogue is presented through text, and there are no auditory cues necessary for gameplay. Everything here is entirely visual, so you can jump into it without any fear.

The review says it all for me! I bought it last night and I am going to try to exchange it for something else today (I will have to convince the store, cuz you technically can’t). I bought our first DSI, along with games for the kids, and this was the one for me. But for me, like the reviewer – too easy, repetitive, no detective work or any analytical thought at all required, really. Just a seek-and-find, and even that is a bit too easy. Although I do think the scenes are pretty cool visually. I wish games had… Read more »

i have reached the end just a picture of a funny bird think cant do anything with it any clues?

You go back to the previous room and find it on the floor.

I am on the train level where I have to search for another battery and I can’t seem to locate the battery anywhere. Can you tell me where I might can find the battery at for the flashlight in the nature center or in the bar? Please give some kind of clue so I will know where this battery is located so I can use my flashlight. I need HELP ASAP. I hope that someone can help me with this.

I am at the find as many objects as you can within a minute page. How do I get to the roller coaster level?

batteries are black and yellow and are usually easy to find

I just started to play this game and already struck….
I am at the place ” No TRAINS here, but there is something interesting in here” message shows up and I found Madam Faite
in the cabinet. I do not know what look for or what to do.
Please someone help!!

it’s just placed randomly in each game… it wouldn’t be the same for you as it was for me. all i can say is search the levels that you have available and the battery should be pretty obvious in a stage where the lights are still on.

also, what i meant was that your battery will die 3x before the game is over, so you’ll have to go find a battery again later.

Yeah, but I’ve spent forever looking at Dusty’s stage, and the nature centre and NO flashlight. Where was it when you found it, and what do you mean by it took 3 trys? Thanks so much for your help.

sure, just go back to another area and look for a battery. it will be in the same cluster of levels you’re currently on, just NOT in the one where the lights are out. it’ll be sitting out in the open, usually. once you pickit up, the flashlight will work again… you have to do this about three times total, IIRC.

I have been stuck on the same page for over a week. It is in the train room, and apparently my ‘flashlight battery is dead and I am required to find a new one.’ Even though I can see the required items to find, clicking on them on this page does nothing until I can get a new battery or flashlight. The hint suggests one might be found in another location. I have looked everywhere. Can someone help me?

yeah, it’s not a *bad* game, there’s just an ocean of missed opportunity here and none of it coheres very well, conceptually. like i said in the review, if it was labeled “generic find-the-item” game that’d be cool, but if you label it a detective game, i sort of want some detecting going on.

…and the vampire thing sounds way more interesting than it is, seriously. it has less than no impact on the “story” at all.

Interesting. I have the impression that these hunt-for-items-in-picture games are popular in the casual market. By popular, I mean that I tried one via MS Games because the mystery vibe caught my eye in an ad; and my other half spent a lot of time playing another such game. It sounds like they ported the same basic format to the DS without going the extra mile to make something compelling. I’m sure for the casual audience who wants to hunt, that’s fine. But it would be disappointing not to have a decent story. And I’m most intrigued about why the… Read more »