A good pout will get you anywhere 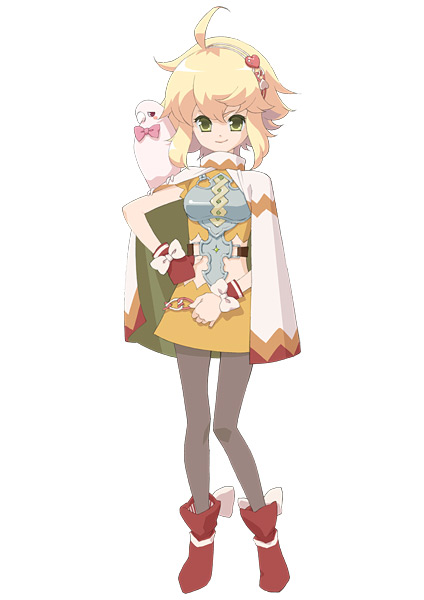 WTF Most of the game has been cannibalized from Master of the Monster Lair.

I have to admit, I'm a sucker for a great premise. The gameplay can be just so-so, and the production values don't have to be very high, but a novel idea or a unique spin behind a title can go a long way towards earning a game's way into my good graces. Originality and freshness count for a lot in my book. However, even the most unique premise has got to meet me halfway. Role-playing game My World, My Way by Global A has its head in the right place. It really does. I was completely prepared to sing its praises and call it a cult hit in the making, but the truth is that everything except its main conceit has a long, long way to go.

Highly unorthodox, the main character in My World, My Way isn't an amnesiac hero or a spiky-haired teenager. No, the star of this show is a spoiled-rotten princess named Elise, and her particular spin on things is that she's so good at sulking, throwing tantrums, and getting her way, that pouting can actually solve her problems. The main issue at hand? The one boy she's got her eye on has no interest in a girl who gets things handed to her on a silver platter. Her solution? Go out and become a rugged adventurer. With experience points comes love, or at least, so she thinks.

Global A (and the always-superb Atlus translation department) have a talent for comical situations and humorous one-liners, and My World, My Way is no exception. The game makes plenty of meta-jokes about its status as a role-playing game, and some of the offbeat situations that pop up would simply be absurd if not for the humor that makes them palatable. For example, there's a running gag throughout the game about why all village townsfolk look alike (they're the same group of actors running from place to place) and lots of commentary about how the princess literally needs experience points and laments her lack. It's smart stuff and I laughed more than once, and for that I give it praise.

I also praise the power of pout. Far and away, it's best part of the gameplay. Listed on the menus just like any other choice, points can be spent to change just about any condition that the player faces. Don't want to fight a particular random battle? Choose "This is annoying!" and just skip it. Want to level up faster? Choose "I want more EXP!" and every monster defeated starts giving double the points. It's an interesting, out-of-the-box mechanic and I loved it… but like the rest of the actual game design, it's shallow and doesn't go nearly far enough. 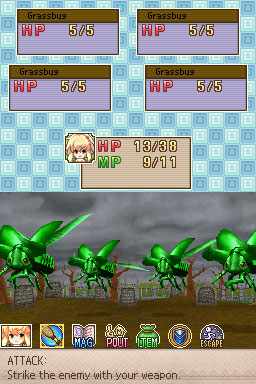 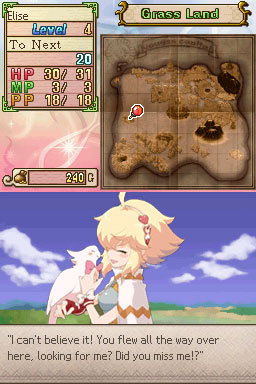 As much as I enjoyed pouting to lower the level of bosses I fought, or changing the environment from forest to field, Global A makes a huge mistake by giving the player all of the available pout options from the very beginning. As a result, there's nothing to look forward to as the game goes on, and this very unique idea grows stale far too soon.

I'm sad to say, the situation isn't helped by what Global A wants players to do. Instead of an overworld to search or traditional quests to go on, each town consists of the same three or four locations (an Inn, Item Shop, Fortune Teller, etc.) and the areas where Elise goes questing can best be described as "grids." Townsfolk will ask her to kill X number of monsters, or collect X number of items, and after receiving the request, the player simply goes to the nearby grid and searches each "square" until the goal is achieved.

In the twelve hours I spent, the game did not vary from this formula one bit. It's ironic, since the writers actually make several comments about the repetitive nature of these quests and how pointless they seem, yet making the observation doesn't negate the fact that the developers are actually making the player do the things that are being ridiculed at the same time. It was amusing and good fun for the first couple of hours, but once I realized that the developers were not going to break out of this rut once the "joke" was over, I lost all interest.

With the whole formula on display in the first hour and no real surprises or variation to look forward to, the golden premise and clever situations can't save My World, My Way from being a shallow, incredibly repetitive experience that could have been much, much more. Rating: 5.0 out of 10.

Disclosures: This game was obtained via the publisher and reviewed on the DS. Approximately 12 hours of play were devoted to the single-player mode, and the game was not completed. There are no multiplayer modes.

Parents: According to the ESRB, this game contains Alcohol References, Mild Fantasy Violence, and Mild Suggestive Themes. The warnings make the game sound much scarier than it is, but the "E" rating is totally appropriate… everything here is very bright and harmless, and I'm actually sort of surprised that it was labeled as such. They don't come cheerier or more upbeat than this.

Deaf & Hard of Hearing Gamers: You will have no problems. Since this is a turn-based RPG, there is no fast action and no need of any auditory cues. All dialogue is delivered via text, so everything here is totally accessible. No sound necessary.