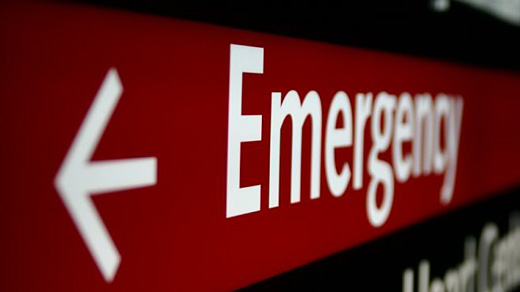 If you follow me on Twitter, then you're probably aware that my wife became very ill Sunday and had to be taken to the ER. I know that it's difficult to follow any given story from beginning to end in tweet format, so I just wanted to give a quick update on the whole thing for anyone who was wondering.

Basically, my wife was feeling a little not-so-hot for a while, but we didn't think much of it. Everyone in the family has been recovering from the flu, sinus infection, or some combination of both over the past few weeks, and everyone is running on a pretty nasty sleep deficit. We kind of ignored it at first, but after we ate dinner that night she started having incredibly severe pain. I made an executive decision to get her seen.

Making that choice was basically a no-brainer since she was hurting so badly, but as people who have recently become uninsured due to unaffordable rate increases, we definitely consider the cost of seeking medical help before we actually do. If you ask me, the state of healthcare in the United States is absolutely shameful, and I am of the opinion that private profit is fine, so long as there is a public safety net. Currently, the only safety net in existence is going to the ER, and that's a poor substitute for consistent, prevention-oriented care.

Once we got to the ER, it was pretty clear that it was something serious. When the tests came back, the doctors said that surgery would be required, they just weren't sure whether it needed to happen now or later. My son (age 3) and I stayed with her as long as we could, but he started fading after a while, so I took him home to put him to bed.

Although I've never been a person to take life for granted, that night was another reminder of how precariously-perched we all are in our daily lives. Things are only good until they're not, and sometimes, we have no control over what happens.

Just the day before, everything was as normal and stable as it ever gets, and less than twenty-four hours later, I was faced with wondering what was going to happen to my wife, wondering who was going to care for my child if I went back to work, if I didn't go back to work in order to care for him, how would we afford to live, what would happen if she needed someone to help her recuperate after she got out of the hospital, and so on… although our situation is compounded because we are a single income family and I am a self-employed freelancer, I don't think what I was going through is very different from what anyone else facing a sudden medical emergency would experience.

… And you know what? It was pretty fucking chilling.

Even worse than that was how the situation was affecting our son. Since my wife stays home with him every day, she is his consistency and his rock. Seeing her laid up in a hospital bed had a huge impact on him, and it was awful to see my little man trying to make sense of what was going on. Utterly heartbreaking.

It seemed like an eternity before we got any hard information, but eventually her test results started coming back with a more positive spin and the doctors started talking about letting her come home as long as she was stable. She continued on that upward trend, and I'm overjoyed to say that we were able to bring her home Monday, and as I write this, she is sleeping soundly and finally getting some badly-needed rest. She will definitely need to have some surgery in the future (and making arrangements for that as an uninsured person is a huge challenge unto itself) but she's good for the moment and I feel like the luckiest man alive to have her back, and the rest of our life along with it.

At this time, I would like to give my most heartfelt thanks to everyone on Twitter who sent messages to my wife and I. We don't have much of a support system locally, but we greatly appreciated knowing that there were people out there, somewhere, who cared. Even getting just a little sentence or two really meant something, so thank you all very much.

Now, since things are back to (relative) normal, I am going to take special pleasure in the fact that I am lucky enough to have the privilege of getting back to this blog's regularly-scheduled programming… 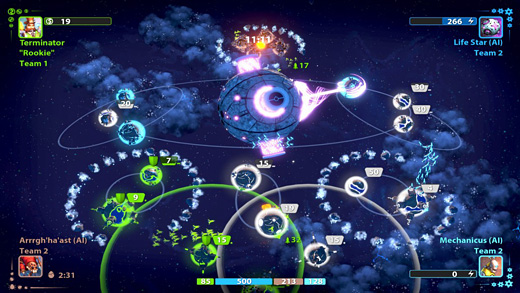 A week or two ago, Planets Under Attack was released on XBLA, and no one I knew (including myself) had even heard of it. I gave a demo a whirl, and I thought it was pretty interesting stuff—it's sort of a super-simplified RTS set in space that asks you to dominate each little solar system you come across, or to meet certain requirements like holding a target planet for X number of seconds, wipe out all the opposition, etc.

I'm about halfway or better through the campaign, and although there is one particular type of mission I absolutely despise (Collector missions suuuuuuuuck) it's been a real thumbs-up so far. It's relaxing enough to sit back and chill out while playing, but the missions are challenging enough to keep your brain from zoning out. I also really appreciate that it doesn't really feel like anything I've played in a while, and as a fan of different, I am a fan of this.

My full review will be coming soon, but if you're looking for something a little off the beaten path, download the demo and see if it suits you.

Man-about-town and Aussie thinker @BRKeogh has put out a book that takes a deep-dive into Spec Ops: The Line. (For reference, here's my review.)

I haven't had a chance to read it in its entirety yet, but this guy is one sharp dude, and even if I end up disagreeing with some of his points, I will likely emerge enriched from the process.

His work is called Killing is Harmless and it's available right here for three dollars. That's right, I said three dollars. If you give a rip about games criticism, skip a latte and support guys like Brendan who are doing the work.

A bunch of new stuff has gone up…

My review of the Infinity Blade novel, which was actually quite good! If you are a fan of the games, it's a must-read.

My review of the latest Mass Effect 3 DLC, Omega. It's a stand-alone mission that doesn't tie into the main story of ME3, and the new partners are good additions to the canon. (Although technically, one isn't new, she's just newly-playable.)

My review of The Walking Dead, Episode Five—No Time Left. It wasn't quite the ending that I hoped for, but it wasn't as disastrous as it very easily could have been, either.

…And speaking of The Walking Dead, did you know that there is a brand-new iOS game completely unrelated to Telltale's series? It's called The Walking Dead: Assault, and it's sort of a top-down dungeon-crawl patterned after the comic book. I've only just scratched the surface of it, but it seems pretty solid so far. The pathfinding AI is kind of wonky, but I love the visual style and I'm a fan of these kinds of games in general.

(Another iOS game to check out? Battle Cats. It's purely insane, yet still a solid game! If you can watch the whole intro and not crack up, you're a stronger person than I am.)

Finally, longtime readers of this blog will know that I have a deep, meaningful affection for the Etrian Odyssey series on Nintendo DS, and the fourth installment has recently been announced for 3DS.

I currently do not own the hardware, but I fully intend to buy it just so I can play Etrian 4. Yes, you read that right… this game is my system-seller. If you haven't already seen it, check out the trailer, and considering that each of the previous three games has been better than the last, this one should be a real crackerjack. Can't wait!

My heart goes out to you Brad. I remember the first time I watched that movie ‘As good as it gets’ way back in 1997, and when the neighbour gets beaten up and essentially loses his apartment – I simply didn’t understand it. The plot device made no sense to me. After watching it again and talking to some US friends the penny dropped. “Universal healthcare” is one of those late game upgrades in the Civilisation games which is a no brainer; yet it’s astonishing to see a modern civilisation simply missing it; almost like visiting a country and discovering… Read more »

Thanks for the kind words, Alex!

It sounds like you guys are out of the really freaky bit, but I know if it were me I’d still be stressing like mad – especially as you’re trying to keep calm for your wife and son.

Hang in there, okay?

So, like the title says, give yourself a thumbs up. And a smile! I think that’s scientifically guaranteed to make you feel better 🙂