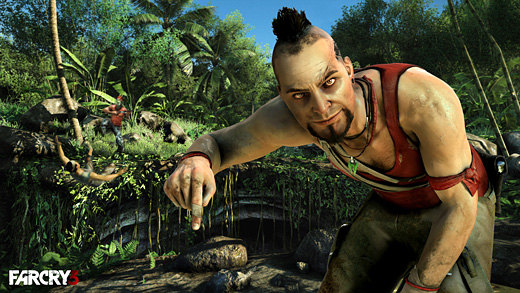 I can't say that I've been a fan of this series, but all the pre-release chatter had piqued my curiosity, and it seemed as though the game was going to attempt to tell a more serious, darker sort of story.

I put about six hours into it over last few days, and… I'm done. I am literally so bored that I am choosing to just quit the game and move onto something else.

Two big issues here. The first is that the story flat-out sucks.

Things started off well with a brutal introductory sequence, but it's hard to invest in the idea that a pasty, spoiled kid becomes a man-killing terror of the islands within the blink of an eye, and that's entirely apart from the fact that it's tough to feel sympathy for a rich douchebag who gets kidnapped while partying in the tropics alongside his rich, douchebag friends.

Making things worse is that the game throws in a lot of misguided mumbo-jumbo about magical tattoos and surreal dream visions. The writers don't really commit to the premise, so it feels stuck halfway between a serious shooter and something that could easily be more supernatural.

The second big problem is that play-wise, Far Cry 3 is as shallow as a dog dish, and turns repetitive a lot sooner than one might expect. 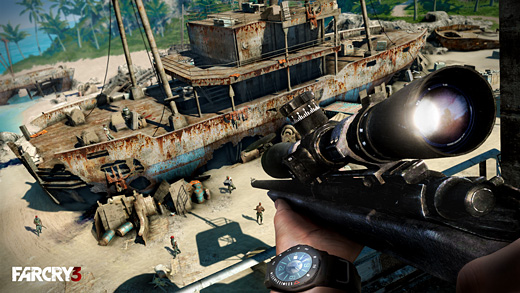 Since following the story doesn't give much satisfaction, the game really needed the sidequests to come through, but they all feel samey after doing just a couple. There's just not much motivation to keep on doing them—the manhunts, tracking down wild animals, delivering supplies… Sure, there's a lot of stuff to do, but it all feels like filler.

It's slightly more worthwhile to liberate a series of small outposts and climb a bunch of towers to unlock the map just because it makes playing the game easier, but again, the game asks players to do it too many times, and there's too little variety in doing so. It's like being handed a giant checklist of chores and working your way through them with a pencil.

The final nail in the coffin is the incredibly underdeveloped skill system. While it initially seems as though there are a ton of abilities to earn, I consistently had a pile of skill points that were going unused because nothing seemed worthwhile enough to invest in. I didn't have any abilities to look forward to, and once I did unlock a skill, I often didn't feel as though there was much difference or improvement—It's like the developers wanted to include a skill tree to give the appearance of depth, but the game doesn't support or need the skills that they've come up with.

Swimming 25% faster? So what? Shooting one-handed from a zip line? I didn't see a single opportunity to use it in the six hours I played. And so on, and so on.

While the game may be technically solid and certainly competent enough, it doesn't have much going for it apart from a huge area to cover and a whole lot of piddly little jobs to kill some time on. I guess there are worse games to play, but that's hardly a recommendation. With more variety and depth it could have been a winner, but as it is?

Yeah, but a limp-wristed psyche major who is just taking a break from Occupy would have died in the first five minutes *before* any insane locals showed up.

If the interface wasn’t so obnoxious and invasive every step of the way, the missions would feel much more natural and seamless in my opinion, the flow would be much better. When there’s always a popup nagging you, what would be decent fun becomes busywork.
I can’t wait for the patch which will allow for the customization of the HUD.

I strongly disliked FC2, but that was more about the respawning enemies and malaria that was about the game being open world. I enjoyed Crysis 2, and I think that in general, I’m a fan of (the idea, at least) of being able to approach a problem any way you see fit. The issue with FC3 is that it’s so repetitive. Once you’ve done a few outposts, they’re all basically the same. For example, I thought it was great the first time I found one with a tiger inside a cage and let it loose against the enemies there, but… Read more »

So, I’m curious, do you usually enjoy games like Crysis, Far Cry 2, or even Dishonored?

The game generally gives you free reign to handle taking out enemies. Which I always enjoy. I can easily see how people would find it repetitive. But I always try and do things differently every time. The games lets you do that most of the time. Whether its throwing C4 onto a car and driving into an outpost, or silently taking everyone out with a crossbow.

I don’t find it boring at all, but I know people that would.

Its better than the last 2, the gameplay is improved. And at the end of the day thats what makes a game. Its also paced out better than Crysis.