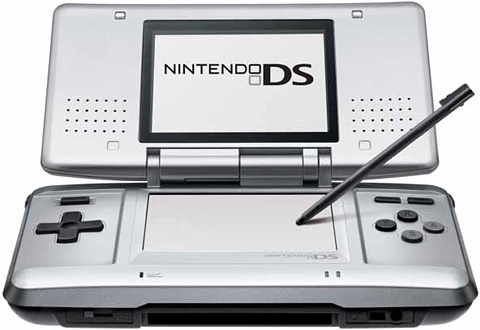 A quick shout-out to the good gentlemen over at the GamerDork podcast. The latest installment is a fairly fascinating discussion with one of the members—a lifelong player who's decided to quit gaming cold turkey. I'm sure that anyone who's been a fan of videogames for any serious length of time will be able to relate to some of the issues that pop up, without a doubt. Click the link, give a listen, and let them know I sent you.

Not really newsworthy, but I figured I'd mention it anyway—I've been rocking an original "fatty" DS since it was released, and been quite happy with it. It feels better in my hands than newer versions do, and having the Game Boy Advance cart slot is a big plus for me. (Plus, it still has the fancy Miyamoto signature stickers I got at E3 several years ago, so there's a good bit of nostalgia attached to it as well.)

Nintendo builds these things sturdier than most automakers build cars, and I've never had a complaint about it. Unfortunately, I think it's time to put this thing out to pasture. Over the last month or so, I've noticed that the battery isn't able to keep a charge longer than two or three hours, and that's not nearly long enough on days when I take it with me out and about. Cue sadface.

I had already been making vague plans to pick up a 3DS, but I guess this really is the clincher. Thanks for the memories, old friend… it's been grand. 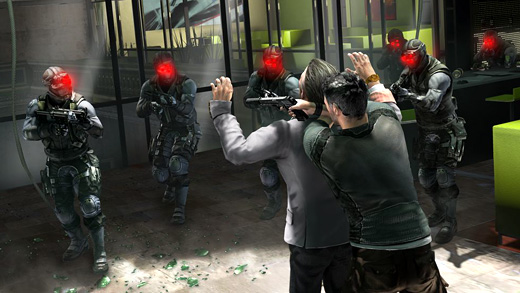 Started Tom Clancy's Splinter Cell: Conviction on 360 yesterday, over the advice of my good friends @Nightdreamer and @Zolos. I probably should have listened to them.

Although I wouldn't say I'm a huge Splinter Cell fan, I have played every game in the series and more or less enjoyed them. I've definitely had my issues with the formula here and there, but I do like playing a good Stealth game once in a while, and there really aren't that many options.

Now, there are even less.

I realize I'm coming late to the party on this one, but I'm stunned at how much Ubisoft has changed in Conviction. I don't even see it as being a stealth game anymore, and it has very little in common with the previous adventures of Sam Fisher apart from the title.

Rather than being sneaky and patient, the game puts raging-bull emphasis on combat and killing. The new "mark and eliminate" and "last known position" features are nice, but they shouldn't be the backbone of the play experience. I've tried to sneak through levels without being seen and without killing anyone a few times, and failed consistently. When it's easier to toss grenades and dive for cover while headshotting goons than it is to disappear into the shadows, that's a pretty big Stealth game fail. Disappointing, to say the least.

I'm not done with the game yet, but I don't need to see credits roll to know that this is not at all the direction I would have taken with the series, and it's pretty disheartening to see that most of what made the game what it was to get stripped out in favor of yet another fairly straightforward action title.

If it was some other generic action game I wouldn't have a problem—hell, I might even praise it—but Splinter Cell is a franchise built on stealth, and stealth is not what's going on here.

I tried one on the Xbox, and remember thinking it wasn’t a very good port. didn’t get far. i don’t play PC, so i’ve never tried the others… I heard there’s a new one coming, tho. 360/PS3 IIRC.

Have you tried any of the thief series? Seeing how you enjoyed Deus Ex, you could give it a try, especially since they were made by some of the same guys.

Brad, almost the same here regarding the DS. I have a Lite one, not a Fat one, but I can relate with what you say about the piece of hardware being trustworthy and nigh-indestructible. I always thought of Nintendo hardware as akin to good ol’ Nokia phones: you can try and smash ’em, crush ’em, flush ’em and they still work. Yet, the 3DS announcement made me consider putting my faithful Lite to retirement. Not (luckily) because of battery issues, just because for the first time in years I am seriously excited about what this new handheld could bring to… Read more »

Yes, the screen is darker which kind of sucks, but the fatty feels more comfortable to play. We have a Lite in the house and I’ve tried it, but I just prefer the older model. That said, I was just about ready to retire it and get an XL, and then they went and announced the 3DS… I can hold out for a little while longer. No sense in buying the model that’s already rendered obsolete.

I meant SC: conviction not SP: Conviction. Don’t know why I abbreviated using the first two letters of Splinter.

I can’t believe you still use a fat DS. Isn’t the screen much worse/ darker on the fat models? The better lit screen is a seller for me. I agree with you on the GB SP slot, but you can get that on a DS Lite.

I rented and beat SP: Conviction back when it came out. A very underwhelming, generic experience.Never any wow moments. It ended and I didn’t even care about what was going on.

Conviction really doesn’t reward (or even encourage) trying to avoid killing, that’s for sure. Much like Arkham Asylum it’s about clearing the room before moving on. I never found myself relying on headshots and grenades though, primarily using the melee takedowns to strike from the shadows (mostly using the corner takedown). Even when detected I was always able to find some place to hide (especially with the use of the portable EMPs or flash grenades to stun guards) and then return to stealthing. But then I’m a fantastic coward.