I haven't talked about writing here at the blog for quite a while, mostly due to not having enough time to devote to it between my family and my duties over at GameCritics. However, I'm happy to say that publication of my second book, Speaking in Forked Tongues, is finally moving forward.

I've been asked to make a few stylistic and content changes by the publisher, so I'm currently in revisions and tweaking a few things here and there. The biggest shift will be that I'm toning down the horror and gore factor quite a bit in order to make it friendlier to the younger reader market. There wasn't a lot of sex in the book to start with, but I'm also making some cuts there, as well.

I'll have more details in the weeks to come, so stay tuned for further news! 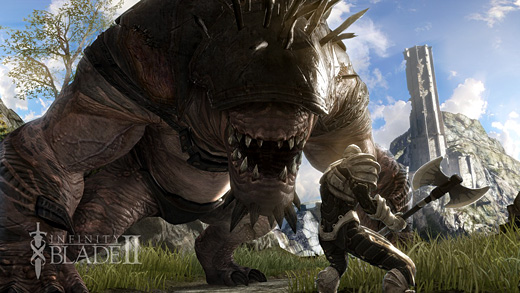 I'm currently in the middle of a marvelous little window of time where I don't have any reviews that need to be done, so I took the chance to pick a few titles out of my back catalogue and get caught up. After three days of fairly steady play, I put the wraps on Infinity Blade II.

In general it's a solid game, and was certainly enjoyable. While I think I prefer the first title's streamlined focus, there are definitely some cool bits here, as well.

Although I don't think anyone would make the case that this game hinges on its plot, there were a few little revelations to keep the franchise going. In addition, I'm a big fan of the visual style… all of the bizarre armor is rather striking, and no one can argue that this series is at the forefront of graphics when it comes to the iPhone. It's also worth noting that the critical path was pretty easy to clear, with some very powerful weapons become available with relatively little effort. I would certainly say that this one was easier than the first game, and that's not a bad thing.

So what wasn't so good? The layout of the castle was a little confusing, especially whenever I was searching for one particular room and couldn't remember where I had seen it previously. Since there's no going backwards, making one wrong turn and getting sent back to the start got old after a while. That wasn't really a big deal (making my own map with a piece of paper and pen solved it pretty quickly) but a larger problem was that the game requires expensive weapons to be purchased in order to see all of the extra bosses.

If you ask me, making the player buy the Infinity Blade itself in either game is pretty stupid—especially in Infinity Blade I—but grinding for one big item isn't a deal breaker. The straw that broke the camel's back was knowing that I'd have to grind for at least three more weapons past the Infinity Blade, and that's not even including the "costs $1,000,000" weapon needed for the super-über-crazy hidden boss at the end.

(And apparently, there's stuff that costs even more past that…)

To be fair, there was very little grinding necessary in order to complete the main quest and a lot of the stuff I'm griping about is purely extra, but still… As someone who enjoyed going after and kicking the asses of the hidden bosses in Infinity Blade I, it's a little annoying to know that there's stuff in Infinity Blade II that I just can't be arsed to work towards. I beat the main quest, collected all of the Vile equipment and the secret ring that comes after, and I have to admit that if the in-app purchases were a little more reasonably-priced, I'd be pretty tempted to pony up and push forward. I just can't see putting $40 or $60 into the game to avoid grinding, though.

Although I don't feel great about it, I'm sticking a fork in this one and calling it done. 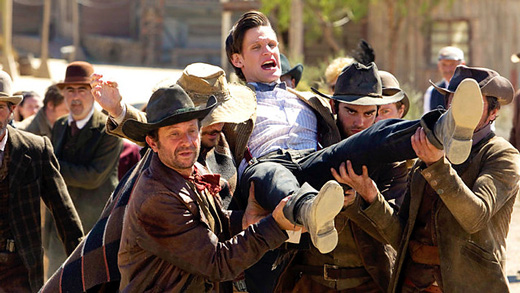 Although I call myself a fan of Doctor Who, I've got to be honest in saying that I haven't really enjoyed the show ever since Russell T. Davies left. It's just been lacking the human element that I always found so appealing. It's been lacking the character work. I'm a fan of sci-fi shows in general, but I need them to have a little meat to them, and the first four seasons of the Doctor fit that bill nicely. Once season four wrapped, things went downhill and they haven't recovered. That isn't news, though… I've said that a few times here at the blog.

I was really hoping that things would turn around this season, but it hasn't happened. I'm still looking forward to Amy and Rory leaving (although I still think having Amy die and Rory be the sole companion would have been a brilliant maneuver) and I'm damn glad that River hasn't shown her face again, but the writing just isn't clicking for me.

The first episode (Dalek Asylum) seemed to take too many shortcuts and had too many big events happening within a short span of time. The dinosaurs episode had the Doctor basically executing the bad guy and missed out on several obvious opportunities for some great character work with Rory's dad and/or Amy & Rory as they relate to the Doc himself. The most recent episode (the Western) was probably the best one of the season so far, but it still felt very uneven. If you ask me, this would have been a perfect place to go a little deeper with regard to the Doctor's past, but again, the opportunity was not taken. As Matt Weise (@Sajon77) astutely observes via Twitter, it's as if the current show is trying hard to ignore the decades of series backstory at all costs.

Although I do enjoy Matt Smith, it seems to me that he has been given the worst material since the reboot began, and he doesn't have a lot to work with. As such, his portrayal seems to be slipping deeper into a weird caricature that's too goofy and too clueless. A little bit was charming, but I feel as though it's becoming a crutch in the absence of anything more substantial for him to build on as an actor. Apart from growing disillusioned with the great doctor, I'm counting the minutes until we say farewell to the abrasive Ms. Pond. Never liked her, and I like her even less now.

Even though her departure will be a minor victory in itself, I can't honestly say that I'm expecting things to get much better overall, and that's a real shame, since seasons 1-4 were some of the best hours I've spent in front of a television in recent memory.

My thoughts are right in line with yours about Doctor Who. I miss the human angle- and the real human angle not the ‘all humans are going to possibly die’ angle. RTD has this ability to really get to the core of characters and even if the set up is completely bonkers- you go with it because the Doctor, and companions, had real depth. They had quirks that weren’t overly quirky to my eye. I feel badly for Matt Smith who I think really is a great Doctor but has been given banal and predictable material to work with. There’s… Read more »