Puttin' a Bow on it 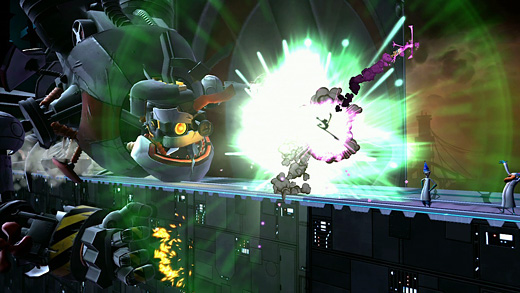 HIGH Captures the insanity that made the first game so great.

WTF That's a "curse"? More like a blessing if you ask me…

Sequels, as common as they are, can often be difficult things. There's a fine line between the staleness of not changing a formula enough, and changing it so much that fans of the original material are put off. Finding a "#2" that hits things in the sweet spot between those outcomes is rare, but Twisted Pixel has done a fine job with Ms. 'Splosion Man

This pinker, more feminine iteration of their 2009 hit is essentially identical to the original 'Splosion Man. In both, the main characters 'splode their way through platform-heavy levels, traverse rapid-fire deadly obstacles, and snuff out the occasional super-sized boss. However, pulling a simple repeat wouldn't be enough to justify a sequel. Thankfully, a wealth of new mechanics and tricks have been added that give Ms. 'Splosion Man her minty freshness.

New bits like infinite-'splode areas, slide rails and transport cannons litter each area and keep the title similar to its inspiration, yet different enough to warrant a playthrough from those who don't want a carbon-copy. It could be argued that certain segments lack the just-keep-moving reflexive flow that the first game had in spades, but that trade-off is what makes this sequel what it is. Newcomers unfamiliar with the first 'splode-filled installment will find a simple-to-understand yet difficult-to-master action/puzzler/platformer that's able to hold its own against just about anything else that will be released this summer.

In addition to the juicy single player campaign, there's also a co-op mode genuinely worth investigating thanks to tricky levels which demand a high degree of teamwork and designs built for multiple players from the ground up. As a person who appreciates a great co-op experience, I'm happy to report that Ms. 'Splosion Man's buddy mode is much richer than simply adding a second player to the solo segments.

While those positives are certainly enough to recommend the game, there were a few things in it that dampened my enthusiasm a bit. 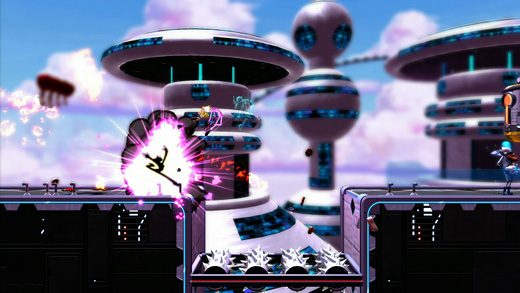 The first was that there are points when the formerly-airtight controls felt just a hair off.  When trying to 'splode a barrel in freefall or when dropping down off a rail into the middle of a narrow electrified field, there were instances when I felt like the handling wasn't quite as flawless as it should be. These occasional hiccups would be unnoticeable in any other game, but when the margin of error is less than a fraction of a second, it gets noticed.

The second issue, and a more serious one, is that many of the checkpoints in difficult areas are too far apart. I can't quite decide whether Ms. 'Splosion Man is equal to or more difficult than its predecessor, but there are plenty of sections that will challenge the timing and dexterity of any player. Complicating things, it's often hard to keep an eye on the Ms. due to too much visual noise on-screen.

When death came (and it did, frequently) I often felt I was being asked to replay larger chunks than desired after a fail. It did not make me happy.  There are many "hard" games making players work for it these days, but the best ones (wisely) tune their checkpoints tighter than they are here. Unnecessary repetition in demanding areas makes frustration levels rise.

My final concern isn't quite as concrete as the ones I've just mentioned; instead, it depends on perception. While I was initially enamored with the psycho antics of the Ms. herself, as time went on, little alarms started going off in my head. I hesitate to say that the characterization here is sexist, but there are undertones that I'm not entirely fond of—stereotypically "female" things like using shoes as the super-valuable collectible item, or turning her fat as punishment for "cheating" on a level.  I was still able to enjoy the game for what it offers, but i think Twisted Pixel is capable of better characterization than the lowest-hanging fruit they chose here.

Those concerns aside, there's no doubt that Twisted Pixel has again displayed the sort of  kinetic design and creativity that made them such a notable studio in the first place. The formula of play still holds much appeal, and there's a lot of game on tap for the now-lower-than-average price of 800 Microsoft points. Ms. 'Splosion Man

may not be a perfect sequel, but it has little trouble justifying a return trip to the lab that spawned 'sploding in the first place. Rating: 7.5 out of 10.

Parents: According to the ESRB, this game contains cartoon violence, drug references, mild lyrics and suggestive themes. Although the art style of this game makes it seem like a great fit for kids, it's actually quite difficult and will likely put young ones off with its gameplay. That said, the content here is pretty bloodless and not graphic, so it's reasonably safe—those warnings from the ESRB are mostly due to the song lyrics babbled by the main character, I suspect.  However, be aware that there are a few areas where the main character uses a fat scientist as a "meat shield" against mounted machine guns, and blowing up human enemies is possible. (It just turns them into skeletons, steaks and chops, though.)

Deaf & Hard of Hearing: You will have no problems at all. There's no dialogue in the game apart from the character's random sound bite babble, and everything vital to play is displayed on-screen. There are no significant audio cues. Download it and have no fear, it's totally accessible.

I wouldn’t say we’re on “opposite sides of the issue.” I fully acknowledge the existence of these stereotypes. Our disagreement just stems from how seriously should something like this be taken. I can’t comment much on Comic Jumper since I haven’t played it, but after a quick search of Google, it sounds like it made some jokes about women staying in the kitchen. This is something I can actually understand as being offensive, since it calls back to the oppression women dealt with in the past. I wouldn’t say it’s sexist, but I get why people would feel insulted. Come… Read more »

Hey Decabo. Sounds like we’re on opposite sides of the issue, or at least, you’re not getting the same sorts of ‘off’ vibes from it that I am. Nothing wrong with that at all. I’m not trying to convince anyone of anything and like I said earlier, I’m not trying to tear down Twisted Pixel. If the game seems fine to you, then there’s no issue from your perspective and I don’t really have an interest in fighting a fight that I’m not entirely sure is there. For me, it was questionable and felt like I should share. Also, another… Read more »

Hey Decabo. Thanks for the comments. >>Even as someone largely intolerant of repeating content, I never found Ms. ‘Splosion Man to be too offensive in that respect. The most I ever lost was around 2-3 minutes at most. We’ve all got our personal preferences, but after playing difficult games like Trials HD and Super Meat Boy and seeing how perfectly their checkpoints are tuned in proportion to the level of challenge, I can’t help but feel that MSM’s are just a little too chunky. >>As for the sexism… to me, there is none. What would be Twisted Pixels motivations for… Read more »

[quote]While I was initially enamored with the psycho antics of the Ms. herself, as time went on, little alarms started going off in my head. I hesitate to say that the characterization here is sexist, but there are undertones that I’m not entirely fond of—stereotypically “female” things like using shoes as the super-valuable collectible item, or turning her fat as punishment for “cheating” on a level. I was still able to enjoy the game for what it offers, but i think Twisted Pixel is capable of better characterization than the lowest-hanging fruit they chose here.[/quote] Just recently played through ‘Splosion… Read more »

Hey Brad, thanks for responding. Even though I think 2-3 minutes is a fair distance between checkpoints, I’m going to focus on the sexism issue. >>In this day and age, people who create content have to be very aware of how their work can be seen and the possible repercussions of that. I spoke to some female gameplayers and at least half of the ones I spoke with said that they did take offense to the character. Between my personal feelings and that many girl gamers expressing distaste, it seems to me that there’s definitely something a little off-kilter. I… Read more »

Well-written review, although I disagree with most of your complaints. Even as someone largely intolerant of repeating content, I never found Ms. ‘Splosion Man to be too offensive in that respect. The most I ever lost was around 2-3 minutes at most. Compared to the 20-30 minutes chunks that can get lost in RPGs with far apart save points, or the long drives that must be repeated after a death in the GTA games, Ms. ‘Splosion Man’s retreading bothered me very little, and it doesn’t hurt that there’s no loading between deaths. I hate repeating content, but being bothered by… Read more »