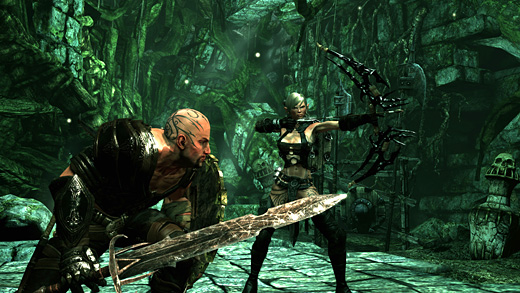 Games-wise, the wife and I are still pushing through in Hunted: the Demon’s Forge (360). A friend of mine recently made the comment that he was enjoying it, but that he would never recommend it to anyone.

I'd have to say, I totally, totally agree with that.

There are so many rough edges and irritations that if I wasn't playing it co-op, I'm not sure that I would have bothered to keep going as long as I have. Having a partner along for the ride enriches the entire experience and makes up for a lot of shortcomings that would certainly erode a single player’s good will and patience.

On the other hand, a partner (even a fantastic one like mine) can only make up for so much. Hunted is long as hell, and in all honesty, I would have been completely satisfied with half the amount of content that's here. This nasty, roughish little game has somehow found itself a comfortable niche on my good side, but I'm ready for it to be over while I still have a certain fondness for it.

Otherwise, my addiction to Monster Hunter Freedom Unite (PSP) has been renewed now that worldwide multiplayer is possible with the return of PSN.

Having now found a group of people to quest with, it's a realistic goal to keep striving towards the last few bits of the game I haven't seen yet. I'm somewhere in the neighborhood of 400 hours at this point, and amazingly, I'm still learning new tricks and still reaching for the last four or five bosses I haven't even encountered.

So, the five-ish paragraphs above that took you 25 seconds to read have basically summarized my entire week… there's been no further progress on the final edits of my book, my inbox is out of control, I haven't watched a single movie or TV show, and life feels like it’s moving a million miles a minute—I mean, I just realized the other day that 2011 is half over already, and it kinda blew my mind.

Switching into a slightly lower gear would be a welcome thing right about now.