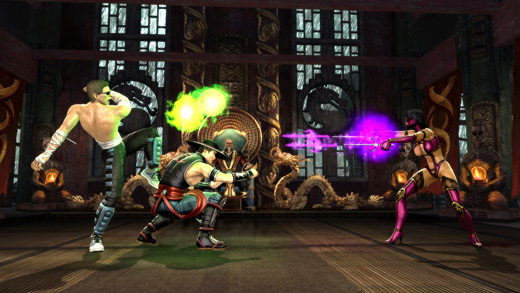 HIGH The story mode is one of the best ever seen in a fighter.

LOW The AI vacillates between "invincible" and "lobotomized".

In the interest of full disclosure, I'm going to admit that I haven't cared about Mortal Kombat since 1993. That was the year Mortal Kombat 2 hit arcades, and in my opinion, the last time the hyper-violent fighting franchise was worth a damn. That second installment wasn't a masterpiece, but it handled well and it was possible to have some decent back-and-forthing between two players who knew what they were doing. It was all downhill from there, though.

Despite numerous sequels trying to get the bloodied work of Boon and Tobias back into the spotlight, it was clear that the devs did not have a handle on how to make a good fighter. After peaking with Mortal Kombat 2, no amount of absurd characters, increasingly complex systems or ridiculous finishing moves made a difference, and Mortal Kombat became a stale joke repeated ad nauseam… until now. I don't know what's changed, but the devs have given their formula a top-to-bottom retooling and produced what is the high point of the entire series.

The first thing that signified a real change to me was that NetherRealm offered an in-depth tutorial on how to play. It may seem like a no-brainer, but it's hard to find a fighting game that actually takes the time to walk a player through its mechanics on anything more than a cursory level. To me, this shows that the developers were really thinking about expanding the audience and trying to open their work up to more than just core fans. With fighting games becoming ever more insular and exclusionary, this is a very smart move.

Another decision aimed at making play more approachable is the effort the developers put into streamlining and polishing the mechanics of play. Most button inputs for special moves are easy to perform, and superfluous gimmicks have been purged. For example, there is no longer a Run button, and the worry of switching between weapons or different fighting styles is gone. The player will still be required to practice and study the positives and negatives of each character in order to improve their skills, but the task is quite sensible and easy to understand.

From an artistic standpoint, I've always felt as though the Mortal Kombat series has had exceedingly poor taste in character design (digitized actors in sad-looking cosplay? no thanks!) not to mention the number of combatants that felt like minor variations on each other. Although there's still a large number of ninjas and cyborgs on hand, each member of the cast now feels much more distinct and varied than in previous iterations. A few remaining clunkers need to be revamped or disposed of (I'm looking at you, Nightwolf) but the marked improvement in style and design is clear to see. 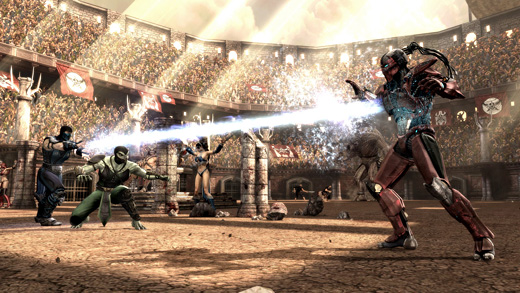 With all that said, I think the thing that really won me over was the game's story mode. While most games in the fighting genre are content with an opening cut-scene, between-match taunting and a bit of text underneath a splashy win pose as credits roll, Mortal Kombat has crafted something completely different.

In this unique campaign, NetherRealm has taken all the various bits of story from the individual Mortal Kombat games and stitched them together to form one cohesive tale. Events unfold by having players spend a few matches with a specific character, interacting with various friends and foes, and then moving onto a new character. Although it's not perfect, I thought it was quite a trick, and an outstanding piece of fanservice for those who want to make sense of who won what tournament, or which combatants have relationships with each other. These vignettes make up a fairly significant chunk of time (somewhere in the neighborhood of 8-10 hours) and getting the scoop on the struggle between Earthrealm and Outworld was a refreshing spin on traditional singleplayer.

All told, it's fair to say that this is the first Mortal Kombat in years that's worth the attention of fighting fans, but despite the numerous advances, it's still not a perfect experience—certain characters feel overpowered and lend themselves to easily-abused combos or juggles, and playing against the AI is often frustrating. It's common to get worked over by a computer opponent with perfect split-second timing, and the endgame fights against bosses like Kintaro or Shao Kahn rewrite the rules of play by letting them shrug off stun-inducing hits and giving them monstrous priority over the player.

To counter these soul-crushing matches, the developers have implemented a system where the AI reduces its own difficulty after the player has failed a certain number of times. I have serious doubts as to whether I would have been able to complete the game without it, but at the same time, I would have rather had AI that was a challenge without cheating. Some of these matches feel impossible until the AI downshifts, and then after doing so, they come off as lobotomized. I like to win, but it's not much of a victory when Shao Kahn leaves himself stupidly open to free hits after mercilessly crushing me for twenty matches prior.

Despite the issues in balance and AI, it's impossible to deny that the level of production and workmanship in Mortal Kombat is better than it's ever been. If you had asked me a year or two ago what I thought of the "Finish Him" franchise, my response would have been considerably less positive than it is now. In light of that fact, my hat is off to NetherRealm for taking a title that had long been irrelevant and turning it into something interesting, engaging and solidly built. In fact, given what they had to work with, I'd say it was nothing less than a red-tinged miracle.

Mortal Kombat has rebooted itself into respectability. Rating: 8.5 out of 10.

Parents: According to the ESRB, this game contains blood and gore, intense violence, partial nudity, and strong language. Moms and dads, this is one of the easiest calls I've ever had to make. No kids should get near this game under any circumstances due to the extreme level of blood and gore, not to mention the large number of provocative (and revealing) outfits worn by the female characters. Although I enjoy what's here, there's no question in my mind that this content is not for children at all.

Deaf & Hard of Hearing: There shouldn't be too much of a problem. All dialogue between characters is subtitled, and although certain attacks are accompanied by specific auditory cues, I didn't notice much advantage in being able to hear them because the game runs at such a fast clip. Playing with the sound off felt the same as it did when the sound was on (to me, anyway) so I would imagine that players with auditory issues will likely be on the same footing as those without.

I’ve played Mortal Kombat before, but usually only at my friend’s house. I might actually have to pick this one up. I’ve never really been great at fighting games, but I’m going to try and get better. Anyway, good review. Have nice day! 🙂
-Spooge