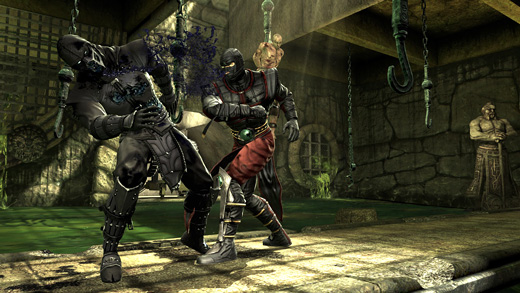 I haven't had a ton of time to play games lately, but what little time I have has been spent with the new Mortal Kombat. After the long, unbroken string of utterly craptastic sequels put forth by the series, it's extremely gratifying to see the franchise finally get its act together and reboot itself into respectability.

Although the fighting engine needs some work and some of the characters feel unbalanced, developers NetherRealm have clearly spent a lot of time working on the movesets for each of the combatants. (Or should I say, Kombatants?)

Most of the changes are quite positive, and it's been interesting to re-explore what the game has to offer. For example, the various ninjas now feel much less like one-offs and palette swaps, and more like individual characters with their own identity, both conceptually and in terms of how they handle.

I'm also quite impressed with the way the writers took the giant mishmash of half-formed "continuity" from the various games and integrated everything into a form that actually manages to make a lot of sense. Of course it isn't Hemingway, but for a genre which typically glosses over backstories, motivations and personal characteristics in favor of exaggerated physical features and a few lines of taunting between matches, getting the full story on the struggle between Earthrealm and Outworld is something of a revelation.

Oh no, the praise doesn't stop there.

In addition, it was quite nice to see a fighting game actually take the time to include a real tutorial mode. Far too many fighters assume prior familiarity on the part of the player, and in doing so, only succeed in leaving newcomers behind. Supporting this warm-to-noobs stance, the structure of MK's combat has been reduced down and simplified.

Although there's still much to learn and practice, it's a relief to not have to worry about anything too ridiculous like double-super-cancels, argumentative-cross-counters or invisible-mega-parries. While I appreciate that some people like to take fighters to the next level and devote much time and energy into perfecting their play, I think there's certainly something to be said for being more straightforward and approachable. MK strikes a very healthy balance here.

If you had asked me a year or two ago what I thought of the Mortal Kombat franchise, my response would have been considerably less positive than it is now. In light of that fact, my hat is off to NetherRealm for taking a joke that had long outstayed its welcome and turning it back into something interesting, engaging and solidly built. In fact, given what they had to work with, I'd say it was nothing less than a miracle. 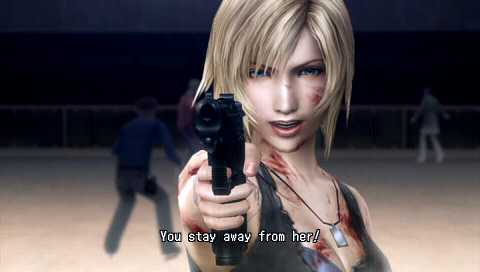 Aside from my time with Mortal Kombat, I'm still playing through The Third Birthday on PSP. I'm not done yet, but at this point all I can say is that it's a real shame that the writers of the plot did such an unbelievably poor job of it. In all honesty, the gameplay (although a little simple) really isn't that bad and I'm a big fan of the body-switching mechanic. However, the story is just pure garbage on every level and I can't even conceive of how someone approved it with a straight face.

I mean, I'm not even exaggerating when I say that I have absolutely no clue as to what's going on. I literally could not explain anything about the plot besides basic elements like "monsters in New York" and "time travel body-swapping". Characters show up and I have no idea who they're supposed to be, things happen and there is no explanation as to what it all means or why I'm supposed to care, and despite all of the talking and high-gloss cutscenes, nothing of significance is ever given to the player.

Creating a story this bad doesn't just happen, it takes hard work and dedication. I have no idea why the team behind Third Birthday was so driven to craft such a nonsensical piece of swill, but it's a real shame that they did—if they had pulled their heads out of their emo-asses and actually written something that made half a bit of sense, this game could have been another high point in the PSP's library. As it is, it's a colossal misfire with a lot of untapped potential.

When you say it upset the fans do you mean because of what they did to Aya?

With the fact that they put her clone sister Eve into her body and revealed you hadn’t been playing as Aya the entire time? It was really depressing to hear and I don’t even play Parasite Eve, I had always been interested in the games and Aya appeared to be an awesome heroine and I looked forward to getting a PSP and playing The 3rd Birthday. But then of course I read the screwover they put onto Aya and it’s super bizarre.

Hey Brad, have you played the previous Parasite Eve games? That may explain why you do not know who is who. The plot though is all over the damn place, but you have Toriyama (a freelance writer who works for Square Enix, who has also written other abominations like Front Mission Evolved, FFXIII and Crisis Core [he’s the guy to blame for all of Genesis’ ridiculous “poetry”]). The chap just cannot write. Third Birthday has ultimately pissed off all Parasite Eve fans with its crappy and insanely convoluted plot. I hope Square learns from their mistakes here.

I never liked Mortal Kombat very much, and I’m pretty burned out on fighting games in general, but I have to admit, they did a great job with the new game. I only ever really enjoyed the first two MK games, and I believe MKII is generally considered to be the best, but this game beats it into a bloody, messy pulp hands-down. The robust amount of single player content is very well appreciated. And yes, 3rd Birthday is a disaster. I loved the first 2 games, and I’ve been looking forward to a sequel for years, but wow, did… Read more »

I consider myself a pretty dedicated MK fan, and have been playing them since the original(s) were ported to the Megadrive and SNes all those years ago. MKII was definitely the pinnacle for me, but I was also happy with Deadly Alliance and Deception. That said, when the games went properly 3D and based on consoles only I was always aware that they weren’t superb fighting games, and lacked the level of balance and polish seen in the likes of Street Fighter and Virtua Fighter (my favourite competitive fighting game series). What keeps me coming back is just the pure… Read more »

Wait till you see the ending! It’s a true shame that the next sequel to the adventures of Aya had to be that bad, but Square-Enix really hasn’t been hitting it out of the ballpark for quite awhile now and this continues that legacy.

Enjoying the new season of Doctor Who, Brad?