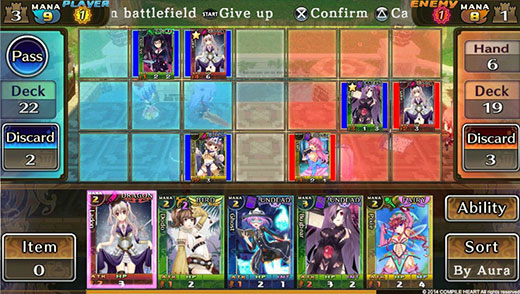 HIGH the deckbuilding and strategic play are deep and satisfying.

LOW tapping a virtual girl's clitoris frantically before stroking the Vita like an erect penis.

WTF Who in their right mind thought these touch functions were a good idea?

On the one hand, its collectible card-based structure and with boardgame elements deliver a fresh-feeling, strategic experience that is sure to satisfy players who are inclined to this sort of thing. Let me be clear, it is A Good Game.

On the other hand, not only is Monpiece wrapped up in a very thick layer of T&A, some of the art style leans quite heavily towards the "she is way, way too young-looking" side, and using the Vita's touchscreen to simulate sexual acts struck me as incredibly immature, and in incredibly bad taste.

In terms of my own biases, I'm totally okay with sexually-oriented content in games as long as it's done well, or at least done appropriately in relation to the rest of the material. The Monpiece concept of taking fantasy creatures like dragons, zombies, and centaurs and rendering them as cute girls in skimpy clothes is just fine. Not every kind of content is right for every kind of person and I'm no supporter of censorship, so stuff like this (in general) is not a problem.

On the other hand, Monster Monpiece takes things a little too far, even for me. While the concept of "undressing" these girls to increase their effectiveness in battle didn't really phase me, I was definitely uncomfortable with how young some of the subjects appear. To my eye, more than a few of them stray too far into pedo territory. However, having been exposed to Japanese games and art styles for decades, even that might not have rocked my boat as much as it did until I got to the touchscreen elements.

The combination of these things pushed the game from "mature content" into "oh my God, what kind of person ever thought this was a good idea?" territory, and I can easily imagine many players being totally put off by it. Frankly speaking, it's the sort of thing that I never want to be caught playing in a public place. However, once the inappropriate ridiculousness is stripped away, it really is a smart, engaging title. For players who like hybridized CCG play and won't object to the aesthetics, it's well worth tracking down. Rating: 7.5 out of 10.