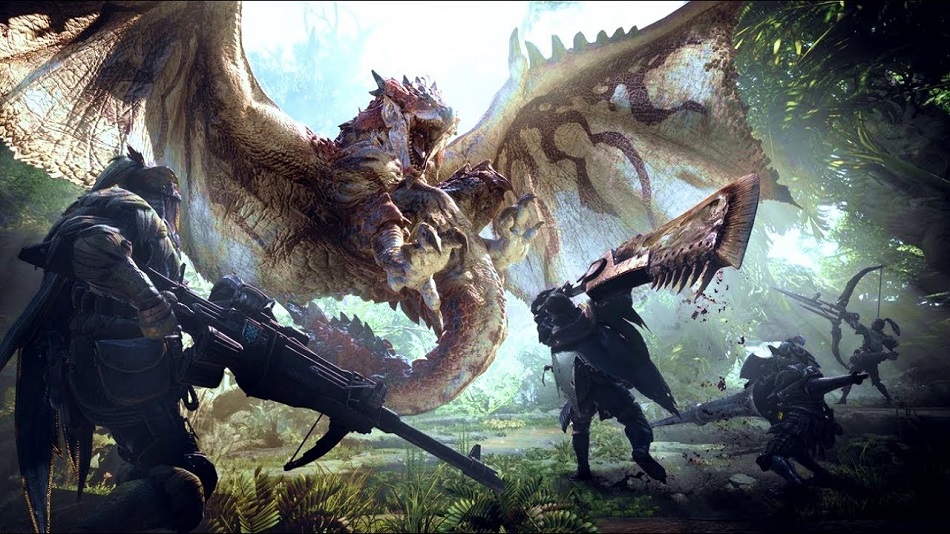 Monster Hunter World is here, and it’s the biggest, best and most accessible entry in this long-running series that’s ever been. It’s the perfect place for MonHun-curious players to jump in!

However, Monster Hunter has a reputation for being a bit arcane, and that still holds true.

While a lot of things are clearly surfaced and many of the systems have been reworked to be friendlier and easier to use, there are still plenty of aspects that have players scratching their heads – even grizzled series vets like me had to sit down and puzzle out a few things!

Here are some quick tips to clear the fog and get you out on the field! 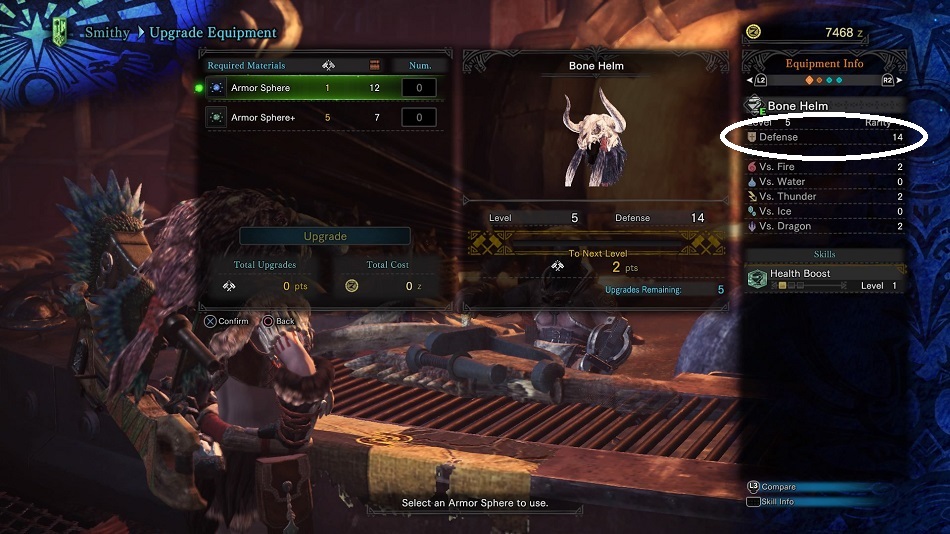 In Monster Hunter, your character never levels up. You get tougher by making better armor and weapons. However, there’s a little more to it than simply making new gear every time you find a new monster. Once you actually craft armor, you need to put Armor Spheres into it to increase its base defense. You get Armor spheres in the rewards after killing some monsters, but you get a lot more of them by completing Bounties at the Resource Center. 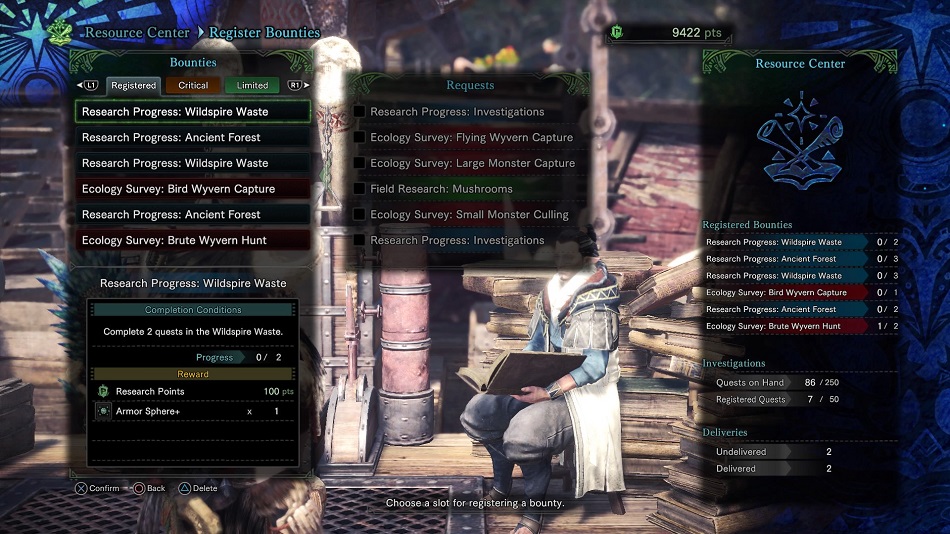 First, you need to select quests and “register” them as the ones you want to work on. Once they’re active, you just gradually check them off just by doing those tasks in the world –everything from picking up plants and mining to completing a certain number of quests in a specified location.

Once you’ve got those done, head back to the Resource Center to turn the quests in and collect your Armor Spheres, then go back to the Workshop and put them on whatever gear you like – your DEF will immediately go up. However, just be aware that once you use a Sphere you can’t get it back, so be a little judicious about where you spend ‘em. 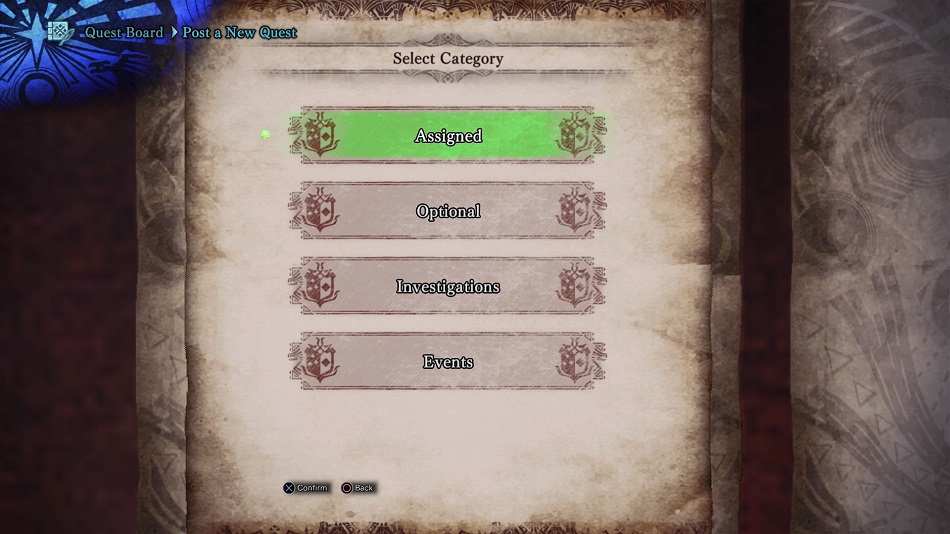 Monster Hunter is really unclear about the different mission types and what they represent. Here’s a quick breakdown.

Assigned – These are traditional “story” quests that will advance the campaign.

Optional – These are sidequests given to you by different characters in the world. You don’t need to do them, but almost all of them let you unlock new items or features that will be greatly helpful during play.

Investigations – These are extra quests unlocked by fighting monsters or by finding monster tracks and clues in the environment. Their basic purpose is to give you an extra chance to earn cash and monster parts. If you want to farm for tails and teeth, this is where to go. Select these at the Resource Center, select the ones you want to do, and they’ll appear at the Quest Board.

Events – These are special quests that are only available for a limited time, and they usually offer some kind of special reward or unique item that isn’t available in the main game. It’s worth keeping an eye on these because some very neat and unusual things will pop up from time to time, but they come and go. 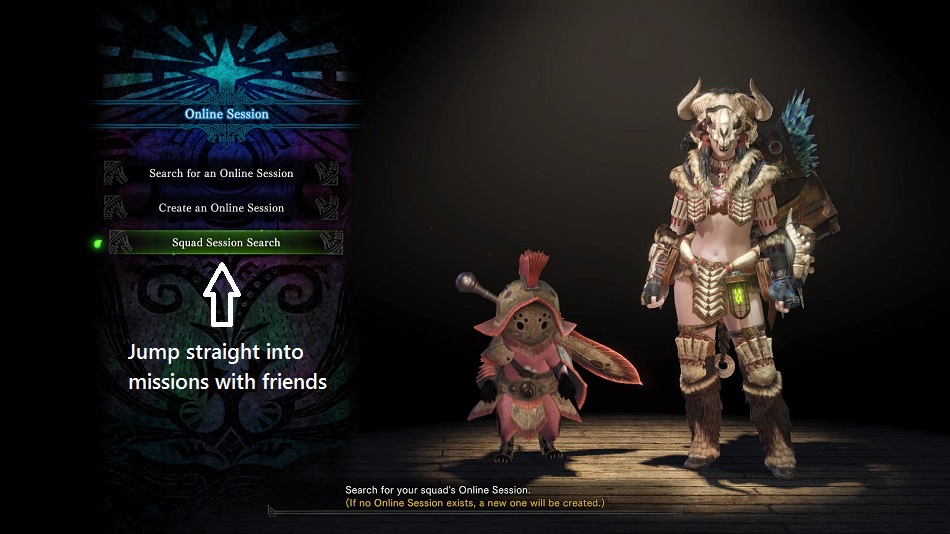 Monster Hunter offers plenty of ways to group up with other people, but one of the best is something they don’t spend a lot of time on — once you finally get together with friends, go up to the Gathering Hub at the top of the homebase. Once you’re there, you can set up a Squad. It’s basically like an online clan of your friends. Then, the next time you start of the game, you’ll be presented with the option to see if any of your clan mates are playing, and if so, you can go directly to them and skip all the steps in between.

If you want to play through the campaign mode with a friend in Monster Hunter, it’s possible, but not exactly optimal. Basically, for any Assigned quest, there are a couple of steps to make this happen.

First, one player (let’s call them Player A) needs to finish the quest on their own or with randos brought in on an SOS.

Then, the second player (Player B) can start the quest that Player A just finished. After Player B has advanced in the mission and watched the cutscene that plays when seeing a new monster for the first time, they’ll be able to bring in Player A.

Basically, one person will always be playing catch-up since the current structure makes it impossible for two players to clear an Assigned quest for the first time when playing together.

Alternatively, both Player A and B can start an Assigned quest separately, both watch all of the cutscenes and then both fail out of the mission. When they restart, both A and B will be able to begin the mission together. (Thanks to @ChiKongLui and @MikeSuskie for this tip!) 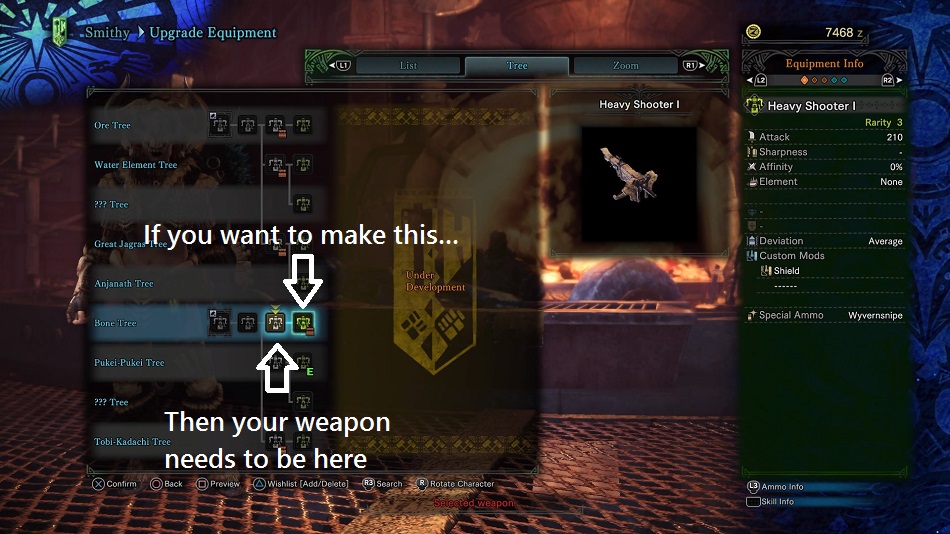 Why Can’t I Make This Sword?

When upgrading weapons in the Workshop, it can sometimes seem like you have all of the required materials and money but still can’t craft it. But, you CAN. First, the easiest way to do this is to actually equip the weapon you want to upgrade. Then, you have to make sure that your weapon is on the “right” side of the upgrade tree. If your weapon is too far down one upgrade path and you seem stuck, you can downgrade it, get some of the materials back, and then choose a new path on the upgrade tree. 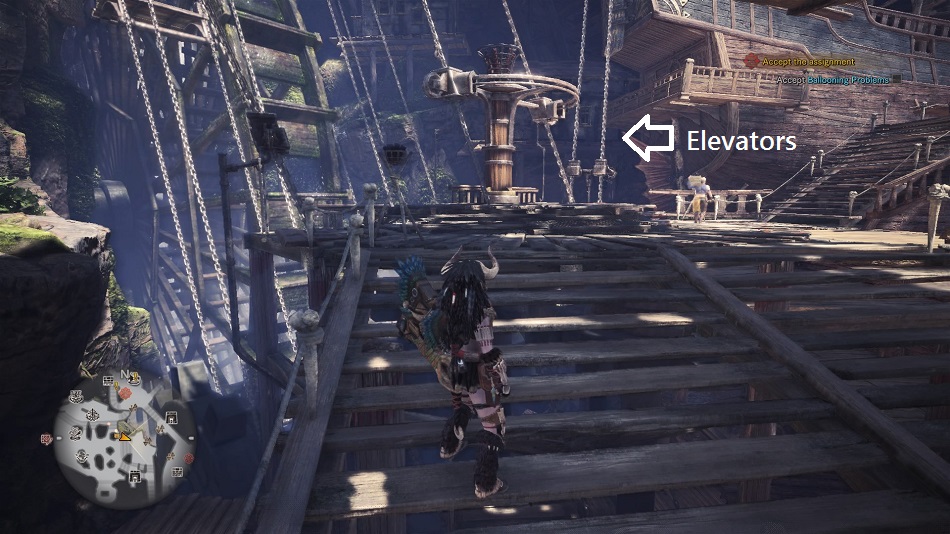 These chains are actually elevators. You don’t need to keep running up and down the walkways, just touch one of these chains and you can go to any floor of the homebase. 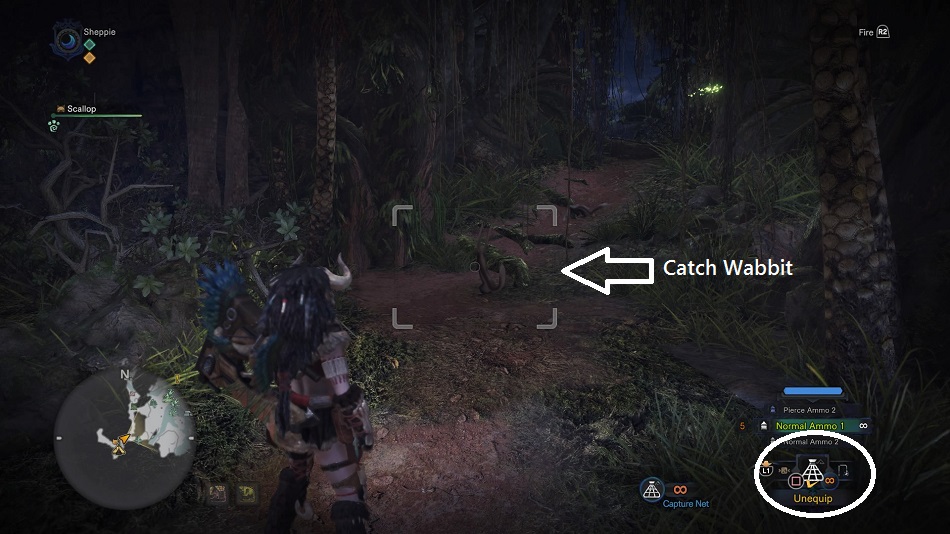 It Was Within You All Along

All players start the game with a capture net, but the game doesn’t explain what it’s for or how to use. Equip it as your active item, and then press Square. You’ll see the reticle on screen change into something that resembles a photo mode. Aim this at any of the small animals in the environment, and you will either capture them or injure them if they can be carved for materials. Once captured, you’ll earn some resource points and some of these animals can fulfill some quests, or you can let them run around inside your house as a “pet”. 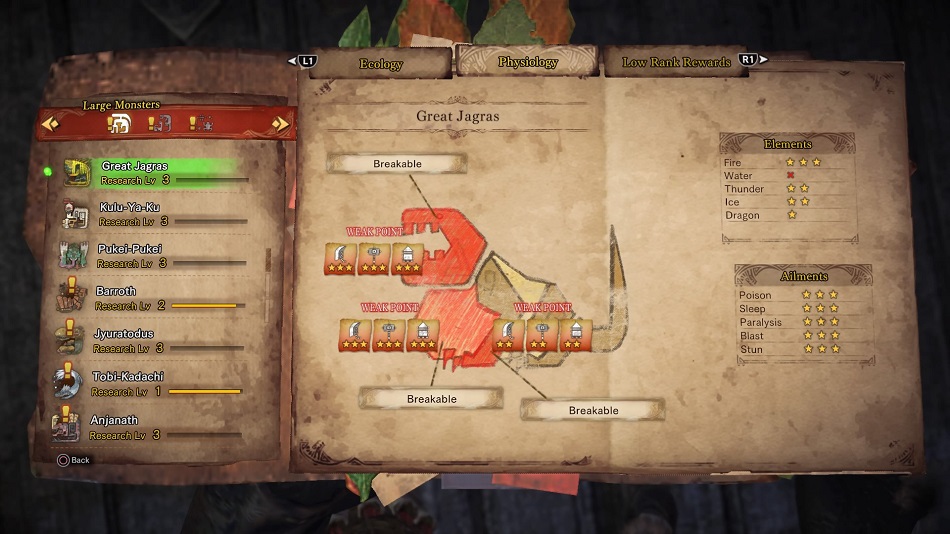 The Poison Sac Is Where?

If you need a specific piece of a monster in order to make a weapon or armor and you’re not exactly sure what to do to get it, you can go to the Ecological Researcher and he’ll show you diagrams that have very clear info about what parts come from where, and what things monsters are weak to. Super helpful! 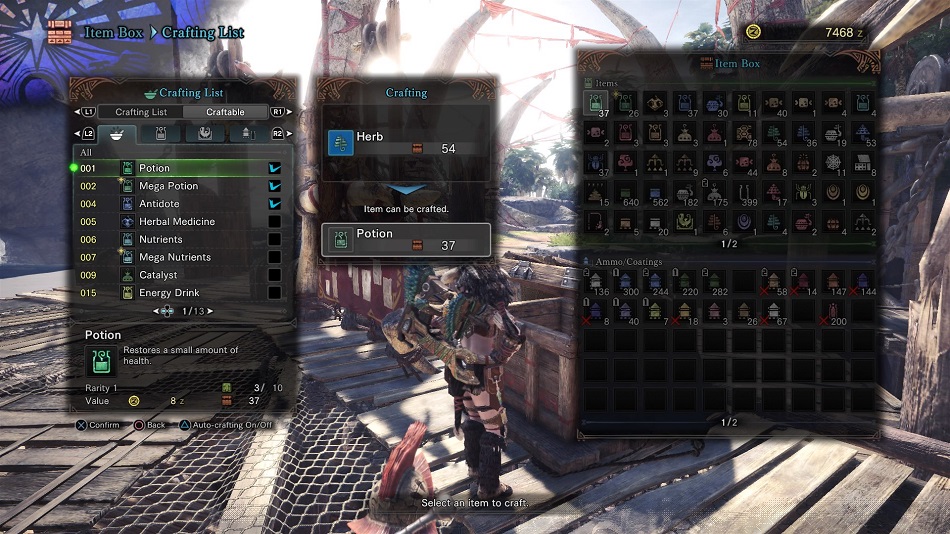 If you go into your item menu, you can select certain things to be automatically made when you pick them up in the field. This is a real timesaver and very convenient, because the game will automatically replenish potions or ammunition for you as you gather those things. However, sometimes you don’t have all of the things in your pack at the same time, and if not, then those things will not be automatically made. As such, it’s a good idea to go into your box back at homebase and manually combine things that you might need in the future. 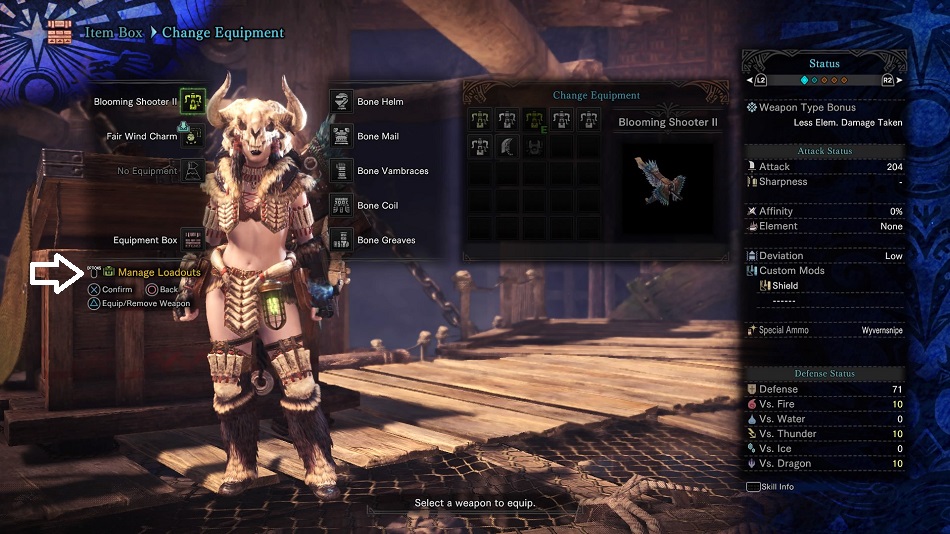 You can make the game remember your favorite loadouts for items (and armor/weapons!) by using the Manage Loadouts function, which is easily overlooked. If you don’t want to have to fiddle with cleaning out your item pouch and restocking after each mission, or if changing each individual piece of armor is a drag, it’s a real timesaver. Thanks to @RoboMegaMan for the reminder! 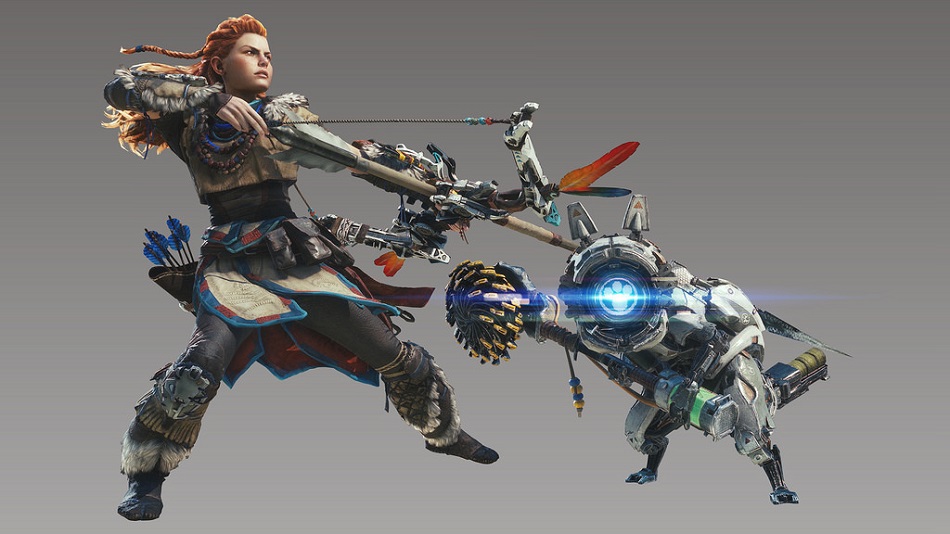 You might’ve heard that Monster Hunter is having some high-profile guest appearances in the game in the form of DLC – Ryu, Sakura and Mega Man have been announced, but the first one to be active as a collaboration is Horizon: Zero Dawn. Currently, the game offers a special suit of armor for the player’s Palico buddy which looks like one of the watchers. However, they’re not exactly clear about how to get it — It’s actually locked behind one of the event quests titled Lessons of the Wild, and players need to be at least HR6 (Hunter Rank 6) in order to access it.

To become HR6, players will need to advance the campaign until they clear the first quest in the third land. At that point they will be HR6 and will be able to take on this quest. However, be aware that you don’t just get the new stuff. You have to beat some monsters and then collect special parts in order to make it.

Sadly, for those players who haven’t heard of this DLC or who haven’t gotten that far in the story, you’re on the clock with this one… This quest expires on February 8 and it’s not clear if it will ever be offered again, so just a heads up.

Great tips, Brad. I was guiding a friend new to Monster Hunter through some low rank missions yesterday. He was having problems with the weapon upgrade screen as well. Sometimes I need to look at the upgrade tree, remind myself which weapon is a part of the tree that leads to the upgrade I want, and then back out to the inventory menu to select that weapon. Thankfully, the Wishlist is great for keeping track of upgrade components. Another tip regarding the Ecological Researcher: when the Research Level increases for a monster, always talk to the Chief Ecologist. In other… Read more »

Great tip about the Eco Researcher, I actually didn’t realize those bonuses weren’t automatically applied! Thanks!