The Third Time is (Kind of) the Charm 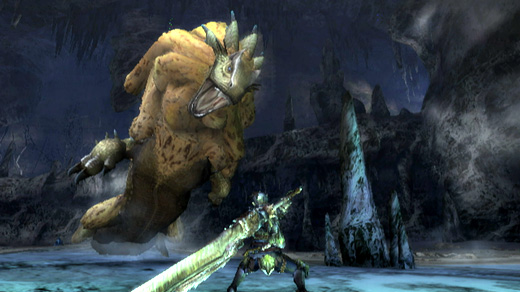 HIGH Getting saved a split-second before death by my AI sidekick.

LOW Getting helplessly pinned by bosses while the camera goes crazy.

WTF Why does this feel like it hasn't advanced in years?

An unusual beast any way you slice it, Capcom's Monster Hunter Tri is a surreal mix of both highs and lows happening concurrently on the same disc. In my experience, it's quite unusual to have such a hot-and-cold product… more often players get a safe, big-budget extravaganza with a few shortcomings, or a jagged small-studio title with bits of brilliance. To get something that presents both ends of the spectrum in nearly equal amounts is not only quite rare, but a real challenge to review.

Before getting into the details, know that Monster Hunter Tri is a third-person, real-time action game in which characters wield shockingly large weapons against shockingly large monsters. Although initial appearances would lead one to believe that the game has a heavy combat focus (and rightly so) it's probably more correct to say that the title is mainly about stat-work and item-grinding with the action thrown in.

After creating a character to preference, the player begins in Moga Village—a small collection of huts on the periphery of a primeval island. Starting out with a modest sword and clad in armor hardly worth a damn, the hook to Monster Hunter Tri is that the player does not level-up their character, it's the equipment that gets improved.

By besting different types of monsters, all sorts of parts can be harvested to create armaments and defensive gear. Feathers, claws, or hides… it can all be turned into something valuable and deadly. Other ingredients for traps, bombs, and status-effect items can be found in the local wilderness, so it's up to the player to get creative with natural resources and power up to the point that each mission can be accomplished. It's not nearly as simple as it sounds, though… players can look forward to hours and hours of grinding in the pursuit of quality goods thanks to the difficulty of vanquishing certain monsters and the frustration of random item drops.

With foreknowledge that grinding is a key part of play, the general premise of being a Hunter culling prehistoric prey and crafting goods from the remains is a great one, and I've been sold on it since the original game debuted back in 2004. However, that first effort had a host of serious problems that prevented it from reaching its full potential. Although certainly improved, the Monster Hunter series has more issues than is reasonable six years later, and Tri is no exception. 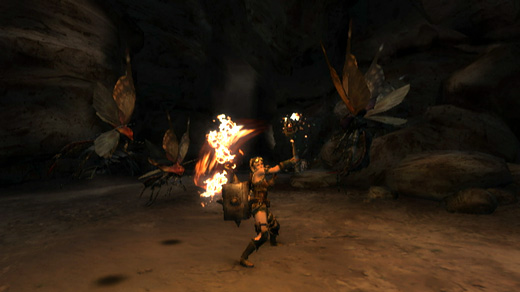 Technically, Tri is comparable to a mid-generation PS2 game and makes little effort to bring itself up to speed with current standards—the monsters and gear look great for the most part, but everything else lacks. Levels are empty, non-interactive affairs split into discrete zones divided by immersion-breaking load times. The camera views are limited, and often obtuse. Controls during combat are slow, stiff and unresponsive. Menus are cluttered and unclear, hiding important information three windows deep.

Oh, and playing with the Wiimote? That's a sick joke. The Classic Controller Pro is the only reasonable way to play, and even that has its issues—the game isn't totally optimized for it, so tons of important info is hidden unless the player awkwardly juggles between the Classic and the Wiimote to reveal it. Last time I checked, the average person only has two hands— I'm not quite sure who Capcom thinks can effectively use such a setup.

Those things aside (and they're significant) another big issues with Tri is that the off-line tutorials in the campaign take far too long and provide too little practical information. It took me several hours before I got to a "real" mission, and by that point I was fighting off boredom, still puzzled by dozens of questions with no easy answers available. How does the Psychic stat work? What does having a negative affinity with a weapon mean? How does elemental damage stack, if at all? Why is figuring out the Bowgun so complicated? With precious little information provided during play, I strongly recommend that players have a lot of patience, that they read the instruction manual front to back, and that they leave a window to GameFAQs open at all times to glean information as needed. It shouldn't be necessary, but it is.

With such a litany of rough edges and unpleasantries, what does the game get right? The biggest and most obvious things for me were, naturally, the monsters.

Nearly every encounter in the game pits the player against a massive, fearsome beast more than capable of ending virtual lives in just a moment or two. Reptilian and fanged, aquatic and slick, or winged and breathing fire from the skies, these enemies are all stars in their own right and viciously excellent examples of the eternal struggle between Man and Nature. This timeless theme runs throughout the entire Tri experience, and I find it hard to imagine anyone resisting the challenge of taking sword in hand and facing off against something so overpoweringly lethal. Emerging from such conflict bloodied and victorious is a feeling that begs to be experienced. 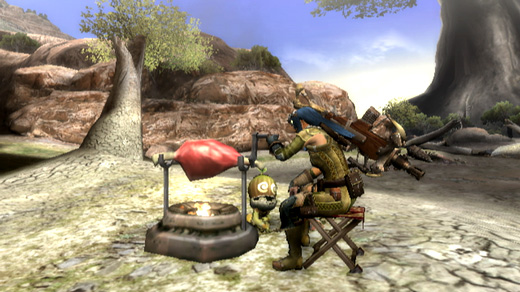 Capitalizing on the monsters, the developers' designs and aesthetics for the gear are flawlessly astute, again showcasing the fact that Capcom consistently has some of the best artists and visual designers in the industry. For players who love loot, the addictive pull to see the next suit of clawed armor or a new bone-edged blade is an impossible lure to resist since such stuff not only improves the player's chances of survival, they're also visual representations of hard-won achievements. Serving both form and function, I have to admit that I became hopelessly drawn into some sessions solely for the purpose of mining that last piece of Machalite Ore for new greaves, or killing the mud-covered Barroth just one more time to craft a better lance.

(As a side note on design, I feel I must give Capcom special praise for their handling of female characters. Rather than taking the "metal bikini" route so popular with other titles, women's armor is every bit as functional and defensive as the male versions. It's a small thing perhaps, but one worth mentioning.)

Although I spent the majority of my time with Monster Hunter Tri in the offline campaign mode, I did join others for online cooperative questing. Much to my surprise, it was a very pleasant experience. The best decision Capcom made was to forego the insipid "Friend Codes" that make the Wii such a pain to deal with online. Instead, players can either join anyone already online, or can trade specific info to meet up with friends. Once online, the monsters are much tougher and require coordinated teamwork for victory. There are also exclusive items, quests, and all-new challenges that await players with a Wi-Fi connection, giving an already substantial game even more content. For me, this is probably the Wii's best online experience to date.

Monster Hunter Tri is most definitely not a game that will appeal to everyone, but it is by far the most polished, user-friendly and approachable entry in the series. That said, it still has much work to do before it can truly be seen as the top-tier title it so longs to be. Many people will spend an hour or two and walk away frustrated and disgusted, and they would be perfectly justified in doing so. However, those who can get past the game's problems and dig into the succulent meat beneath just might find that Tri satisfies a certain simmering hunger the way that few console games can. Rating: 7.0 out of 10.

Parents: According to the ESRB, this game contains blood, use of alcohol, and violence. Although there is no sexual content or salty language, I would have to say that the level of violence in the game is not appropriate for younger children. Putting aside the fact that the game can be brutally difficult, some of the larger monsters are actually quite frightening and imposing—easily the stuff of nightmares. Taking huge swords, axes and hammers to these beasts is a brutal affair. I would definitely recommend younger kids be steered away.

Deaf & Hard of Hearing: You should be aware that there are several types of audio cues which are not represented in any visual way. For example, upon entering an area holding a major monster, there's often a roar or shriek. Without being able to hear that cue, the player could easily be surprised by a very deadly foe. Also, several monsters give audio signals before executing certain attacks. I would imagine that hearing-impaired players would be at a bit of a disadvantage without hearing these signals. On the plus side, all dialogue is delivered through text, so players won't miss any information given by NPCs.