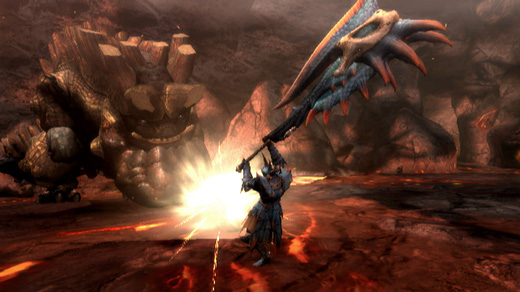 Started playing Monster Hunter Tri the other today. I won a free copy in a contest via Twitter (Thanks GameZone!) so I had it on hand, otherwise I probably wouldn't have gotten around to it until summer, or even later.

Why not? Well, if You've been keeping an eye on retail shelves, you might have noticed that there are an absurd amount of games coming out lately. I'm not talking about off-season shovelware stuff, I'm talking big-name, big-recognition titles. With all of these things to play and review, the usual slow period enabling me to go through the backlog and catch up on older things just hasn't materialized. I really hope things cool off over the next few months, though. If this pace keeps up and my backlog keeps growing at its current rate, I'll be able to sustain my gameplay habits until sometime in 2024 without ever buying another game.

Back when Monster Hunter first appeared on the PlayStation 2, I can remember seeing one of the first trailers for it a few months before the game hit. At the time, it was utterly mindblowing and promised potential that players had only dreamed of. Even today, the trailer still looks extremely exciting and full of action.

Unfortunately, the reality did not match up to the level of action in that trailer. Stiff controls, a very steep difficulty curve and heavy emphasis on grinding for resources flew in the face of the tone set in that trailer, and I quit the game in disappointment pretty quickly. That said, the trailer never left my mind and I would often wonder when developers would tackle something like it.

Many have come close, or at least skirted it. Shadow of the Colossus is one that shares the scale, although not quite the same level of balls-out-ish-ness that's implied. (And don't get me wrong, I loves me some Shadow of the Colossus. This isn't a criticism.) Closer to what I was craving was Lost Planet, oddly enough, also from Capcom. The scale was great, it added mecha to the mix, and in general I was pretty satisfied with it, although it did not have the same fantasy- medieval tone. Despite these titles and a few others that have similar themes, none quite scratched the itch that the idea of Monster Hunter instilled in me. It's kind of absurd when you think about it, since the game that inspired this desire didn't even live up to the promise itself.

Now we come to Tri, the most recent (third) game in the series.

Despite having a deep suspicion that it was going to be more of the same, I was thrilled when I won the Twitter contest. I immediately began hoping against hope that Capcom had revamped the formula enough to win me over and finally provide the monster hunting experience I've been after. After putting in a few hours today I can say that it definitely feels better than it was, but I can't shake the feeling that I'm headed towards disappointment again.

Putting all issues about the Wii's hardware aside, the game still relies heavily on menus and resource procurement/management. For something seemingly all about giant swords and enormous reptiles, there's an awful lot of emphasis put on collecting things and leveling up equipment. Don't get me wrong, I'm no stranger to this stuff, but this all strikes me as a bizarrely disparate relationship between the reality of the game and its image. My eyes are telling me that this should be a high-octane, intense and action-packed title, but my hands are telling me that I'm mining for iron ore, farming small monsters for their pelts, and searching for rare mushrooms.

I certainly haven't given up yet and I will say that it was an enormous relief to get past the extended tutorial phase and start doing quests proper… tackling groups of large lizards and finally getting knee-deep in some combat was extremely welcome even if the action still feels completely stilted and slow. However, I'm starting to wonder how long it'll be before I hit a wall and need to straight-up grind in order to progress. I desperately want to like this game and finally be able to enjoy the kind of adventure Monster Hunter eternally promises, but I'm thinking that maybe, just maybe, I'm headed for another heartbreak again.

Well this certainly leaves a huge and tremendous rift of deference between us, considering I could never (happily) play SotC on account of the stale gameplay, inhibiting sense of loneliness and hours of wandering between each fight, none of it crucial or imperative to your development. Having ace’d much of MH’s more intricate and challenging aspects I can say that I’ve seen ridiculous things far beyond the scale of that trailer, and experienced times when organizing menus all day to prepare for any kind of thrill or horror I could possibly receive the bad end of was sometimes enough to… Read more »