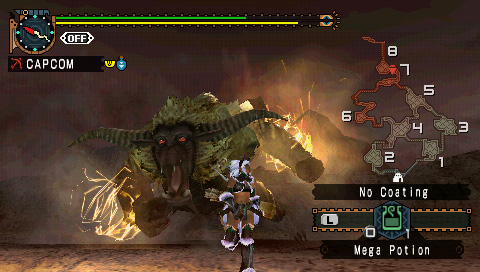 I announced this on twitter a few days ago, but it was such a milestone for me that I felt like a little micro-commemoration here at the blog would be appropriate.

The thing that makes this such an accomplishment for me (to start with) the game is absolutely huge. I never would have expected a PSP game to be so deep and expansive, but it's larger than a lot of console games I've played. It's also significantly larger than Monster Hunter Tri on the Wii. In fact, I've heard there's something like a total of 400 missions (or thereabouts) in Monster Hunter Freedom Unite, and although I haven't verified that personally, I wouldn't be surprised at all if that was true.

The second thing that was a challenge is that the game is structured somewhat like an inverted pyramid. Well, that's how I envision it, anyway.

When a player first starts out, it doesn't take very many materials to craft weapons and armor, and most of the opposition creatures are relative pushovers. As the game progresses, it takes more effort to craft the gear needed to survive, and the bosses turn into death-dealing hellions. That's generally the norm for games anyway, but Monster Hunter takes it a bit further. As a means of illustration, it took me about two days of playing in order to collect enough materials to craft the weapon that I eventually finished the game with, and that's not counting the time invested for the armor I was wearing.

Those two factors were significant, but the final obstacle was by far the most problematic—the camera.

Since there's only one analog nub on a PSP, camera control is mapped to the D-pad. The game offers a snap-behind camera function with the click of a shoulder button, but this is only workable on the easiest missions. Later monsters are so quick and so powerful that they have to be kept in view at all times. Losing sight of them for even a moment usually equals death.

The answer to this camera issue? "The claw"; a technique of keeping the left thumb on the nub and the left index finger on the D-pad. 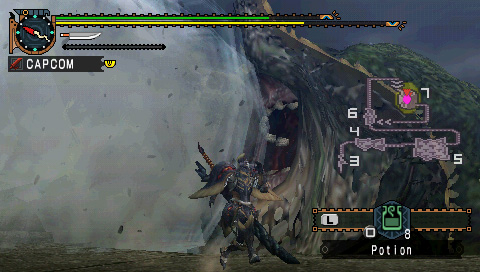 The claw starts out feeling quite awkward and equally uncomfortable, and to be honest it made me quit the game for a few months out of frustration. I eventually came back and learned to perform the claw so effortlessly that I forgot I was even doing it, but it still took a lot of dedication and remains a sub-par solution the game's most crucial problem. To say that I'm looking forward to the Next-Generation Portable's (NGP) dual nub setup for Monster Hunter Portable 3rd is a massive understatement.

So, with all that said, the fact is that I still found the game to be compelling, exciting, and (yes) addicting enough to stick with it in the face of adversity and persevere for 239 hours and 45 minutes of the single-player adventure. This was the longest amount of time I've ever spent on a single-player campaign, but I did it.

I'm sure that if I started a new game from scratch, I'd be able to whip through things in a much shorter period of time, but I don't think I did so bad. I've seen some people who've logged times in the neighborhood of 500-700 hours, and while I'm sure a lot of that is attributed to noodling around in the game's upper-level G-Rank difficulties, I'm still going to say that 239 wasn't bad for a first time through.

For those that are curious, here's my info as of finishing off the final campaign mission:

In terms of items, I had 20 Mega Potions, 5 Mega Juices, 2 Mega Demondrugs, 2 Mega Armorskins, 1 Ancient Potion, 5 Flash Bombs, 5 Cool Drinks, 20 Whetstones… and that was about it. I didn't even use everything that I brought, so although the Mega Potions and Mega Juice (for Stamina) were great, a lot of the stuff I was lugging around ended up being unnecessary.

So, now that I've seen credits roll, what next?

Well, there's still a ton of content I haven't even seen and I could easily put another 200 hours into the game if I wanted to, but I decided to put it aside so I can focus on other things for review. However, as you might have guessed from the statement above, my son (age 9) is every bit as addicted to hunting monsters as I am. I have a feeling that when he comes back out to stay with me for spring break, Monster Hunter Freedom Unite will find its way back into my PSP for another round of co-op…

…understand where you’re coming from. I honestly really want to play Gods Eater Burst, but after putting 135 hours into Lord of Arcana (and counting), I’m pretty burnt on this type of game myself.

> Scott Thanks for the congratulations. = ) As for the camera, I guess it depends on the player, but I personally found the snap-to camera function to be really inefficient… deadly, even. It was alright when I was still at the lowest level quests, but I found I could not keep up with the monsters until I mastered the claw. Thanks for the podcast praise, by the way! > Sakilla At the moment, we have Mike doing the review and we will have a second opinion by a guest writer. It’s on my list of things to check out,… Read more »

…what your reaction would be to Lord of Arcana, the new Monster Hunter clone on PSP. I’ll be up front, I put about 20 hours into Monster Hunter Freedom Unite, and although I stopped playing due to other gaming distractions, I found the game to be overwhelming. I was getting a grip on it, but moved on, though I hung onto the game, and plan to play it again someday. Then, Lord of Arcana released to awful reviews. But like or hate the game, many of the reviews I read were completely misleading. I personally love the damn game. It… Read more »

First, congrats. Finishing any Monster Hunter game is a tremendous achievement. These are not easy games. Second, I find it interesting you had so much trouble with the camera. Aside from adjusting the camera to the right height (I always point it so it’s at an angle “looking down” on my character) with the d-pad at the start of a mission, I only use the Left Trigger from then on to push the camera behind me. So I never had a “claw” issue. (If you ever played Phantasy Star Online, you’d know what I mean by “tapping a trigger to… Read more »