Doodle Gets It Done 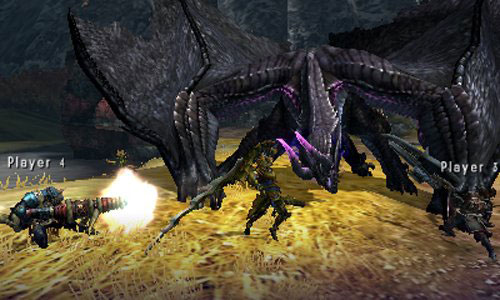 HIGH A new Monster Hunter! And it's the biggest one ever!

LOW Why do the cats' names start repeating so soon?

WTF Where's my WiiU version and the Data Transfer tool?!?

Although it's not really the fourth installment of Capcom's long-running series if you count all the various versions, Monster Hunter 4: Ultimate is now here, and by any measure it's a major step forward for the series that invented the Boss Rush/Hunting genre.

While it's been a cultural phenomenon in Asia for 10 years, Monster Hunter has a smaller, but very devoted following in the West. For players who aren't familiar with it, it's pretty simple: Create a character, choose one of the 14 different weapons available, and then set off on quests. Some involve fishing or collecting things, but the real meat is going to-to-toe with the 70-odd monsters that appear over the course of the adventure and beyond.

The gameplay is third-person, real-time action, and incredibly strategic in a moment-to-moment sense. Each weapon handles wildly differently from the rest, to the point that each one is almost its own game. The Greatsword is a massive cutting blade, the Insect Glaive staff comes with an insect companion and the ability to vault, the Dual Blades slash with blinding speed in a stamina-powered demon mode, and gunpowder fans will enjoy the gatling-like Heavy Bowgun or the poke-and-blast Gunlance.

The same variety can be found in the monsters themselves. Each is a boss-sized affair with its own behavior and habits. The creature designs run the entire spectrum of nature, including everything from flying dragons and massive spiders to obnoxious bunny rabbits, horned apes, firebreathing fowl, ceiling-clinging leech-things, and more. Every encounter is exciting and tense, not to mention richly rewarded—there are several armories' worth of weapons and armor that can be crafted from the remains of fallen foes. It's an incredibly stylish way to demonstrate previous conquests while making hard work on the battlefield pay off in spades.

While that summary was extremely brief, what I've just described has always been the core of the Monster Hunter experience, and remains so. However, as a longtime player, I'm quite eager to bring up at the significant improvements that make 4 Ultimate stand out from previous entries…

The first major change is that Capcom's finally acted on complaints of the game starting off at a snail's pace. Older MH entries tended to be frontloaded with tedious gathering and busywork, when it's pretty obvious that people come to the game to fight monsters. The snoozeworthy quests are still there, but they're now optional, and the devs even poke fun at them with few jokes. In 4 Ultimate, players start going up against big stuff right away, and cranking up the pace is a smart decision.

Another smart (and overdue) shift is that the game goes out of its way to provide much-needed information and tutorials. Although Monster Hunter is incredibly deep and covering every aspect would require an in-game wiki, the available knowledge is genuinely helpful. It was great to see plenty of prompts for things new players would likely miss, like how to cook meat or what subquests do. There will still be questions that need answering, but 4 Ultimate is a far cry from the series's former cryptic impenetrability. 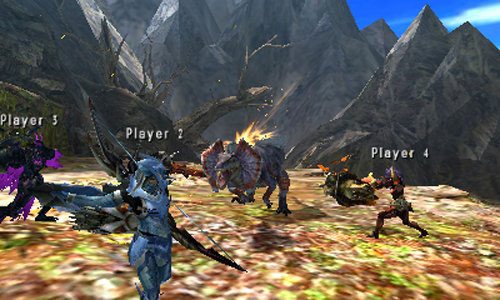 I'm also happy to report that the aquatic combat from 3 Ultimate is now gone, and good riddance to it. In its place is a wonderful new system that features an all-new level of verticality. In the past, most areas had slight hills or slopes, but players were essentially fighting monsters on flat planes. This time around, nearly every area has some type of ledge or shelf to climb on, and from these, players can leap onto monsters and ride them rodeo-style. Adding this vertical element gives the game an all new dimension of dynamism, and is miles better than trying to fight underwater.

It's also worth noting that the single-player campaign is (relatively) compact, and the beginning tiers of monsters are less deadly. Players who aren't sure of what they're doing can successfully stumble through most of it with a little bit of effort. Of course, that's not to say it's a cakewalk, but getting rid of the progress-halting brick walls the series has been known for is a good thing. However, MH vets shouldn't be concerned about a lack of challenge… The high rank and online quests after the first "ending" cut-scene still bring plenty of heat.

For those who want to experience the multiplayer aspects of 4 Ultimate, it offers true online capability, and players in North America will be able to play with those in Europe, and vice versa. I spent much time in multi during the review process, and it's incredibly stable, easy to use, and works like a charm. Out of the dozens of hours I've put in, I've only seen a tiny number of hiccups or lag—amazing considering that this game is running on the 3DS.

Speaking of its status as a 3DS exclusive, we come to my only major complaint about Monster Hunter 4: Ultimate—the fact that it's a 3DS exclusive. Although it makes sense given the current relationship with Nintendo and the prevalence of local co-op in Japan (where the game is a blockbuster) I can't help but be disappointed that it's only on the weakest piece of active hardware. To be clear, the game runs just fine, but it's such a rich experience that I think it deserves full HD graphics, more detailed models, sharper textures, and so on. Considering that game saves in 3 Ultimate were able to be transferred between the 3DS and the WiiU, I'm puzzled as to why there's no other version available. It's great to take Monster Hunter on the go, but when I'm at home, it's crying out to be on a bigger screen.

Other complaints I have are quite small—things like some menus still being a bit cluttered, and some processes that still need streamlining. It's minor stuff, and hardly worth mentioning in light of all that's improved. However, one final thing to be aware of is that I was playing on an old 3DS XL equipped with the Circle Pad Pro. Players who don't have the CPP (or the "new" 3DS with the nub added) will find that handling the camera via the touchscreen is incredibly awkward, and adds an unwelcome layer of fuss. Those who plan to dive into the game should import the CPP or pick up the new 3DS, no two ways about it.

While Monster Hunter 4: Ultimate is still Monster Hunter (and thank goodness for that) Capcom has put a great deal of effort into improving the overall experience, and I'd say that their revamp has been a wild success. It's easier to get into, there's a ton of quality content, the learning curve is more welcoming to newcomers, new amenities reduce crafting tedium, the vertical elements are superb, and the ability to go online with friends on two continents is fantastic.

Although I worked through a big chunk of the game before I wrote this review, it feels as though I've only just scratched the surface of what 4: Ultimate contains, but I'm looking forward to a 2015 filled with monster hunting, armor making and weapon crafting… If the rest of the adventure is as good as the first 80-odd hours have been, it seems safe to say that Monster Hunter 4: Ultimate is the best entry the series has ever seen. Rating: 9 out of 10


Disclosures: This game was obtained via publisher and reviewed on the original 3DS XL with a Circle Pad Pro attachment bought separately by the reviewer. Approximately 85 hours of play were devoted to the game: 60 hours in single-player mode (the Low Rank quests were completed) and 25 hours in multiplayer mode.

Parents: According to the ESRB, this game contains: blood, crude humor, and fantasy violence. The game is all about whacking big monsters with big weapons, so know that before going into it. That said, it's not particularly graphic, and the blood from big hits can be turned off in the options. The crude humor probably has something to do with the goofy antics of the cat-creature sidekicks, but I can't recall anything remotely offensive. My whole family plays the game, so I have no reservations about letting even young kids watch or play it at all.

Deaf & Hard of Hearing: All dialogue is presented via text (the cut-scenes feature indecipherable speech) so the plot is easy to follow. In battle, some monsters give audio cues before certain attacks that aren't telegraphed on-screen. They're not entirely necessary for successful play, but gamers with audio impairments will have to pay extra-close attention to the physical tells of monsters. That said, I spent many hours with no sound at all, and I found it to be entirely playable.