So Monday Night Combat is out. If you haven't taken a look, check out the free demo available on Live.

Despite having one of the longest and most tiring days in recent memory, I was able to get a couple hours in before falling asleep. While I'm usually a solo player, this is definitely a game that benefits from having real teammates, and I was fortunate enough to jump into a group where almost everyone knew each other.

To be sure, the meat of the experience is had in the 6-on-6 Crossfire mode. Having live players to go up against while trying to take out the enemy's money ball was a great time, and although I tend to favor the Tank class, I was having quite a bit of fun with the Sniper. I hope to spend some more time with it this week, but based on my experience this evening, I would really only want to do it with people I knew. I can't imagine it would be half as fun with strangers.

Then again, that's pretty true for just about any game, isn't it? 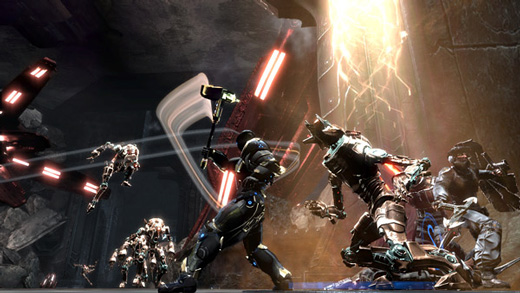 In what is likely to be the biggest, most unexpected surprise of the year (for me, anyway) GameCritics Podcast host @TimSpaeth finally convinced the rest of us to partake in a group play/discussion on 360's Too Human for an upcoming episode.

What was the surprising part? I actually liked it.

If you've ever listened to the podcast, you've probably heard Tim talk about Too Human, or at least mention it. In fact, it gets brought up so often that it's basically a running gag on the show.

The rest of us have ribbed him about his love for the title dozens of times, and he's always taken it in good humor. However, I think that we all assumed he was slightly crazy. After all, Too Human took a serious critical beating when it was released, to the point that it was almost an industry punchline. A large part of that had to do with a general reaction to Silicon Knights' head man Dennis Dyack on a personal level, but it's still common to ask people what they think of the game apart from Dyack and get a negative response. The words "garbage" or "worthless" are descriptors that come up a lot in conversations I've had.

To be perfectly honest, I was dreading having to play the game after hearing so much bad about it. I figured I'd put in a half an hour, vomit in a bucket, and then think up some more jokes at Tim's expense. However, that's not what happened. Not at all.

While the game is certainly unconventional in several ways, I have to say that it didn't have much difficulty grabbing my interest and I was actually quite fascinated with some of the choices on display—things like the new take on a classic hack-and-slash control scheme, or the way the game has reinterpreted Norse myths into cyberspace metaphors. It's pretty clever, really.

Oh, and the loot? It falls like rain in a monsoon season.

Too Human's a perfect example of a concept that should appeal to a lot of players (Norse myths as cybertech—in a hack-and-slash!!)  but I can understand how the final, gotta-chew-on-it expression of that concept would catch some people off guard. However, after putting three hours into it, I was actually wondering how so many people who reviewed it ended up being so negative. It's certainly different, but I haven't seen anything that was outright bad or wrong. So far, anyway.

After having said all that, I do feel as though I owe both Too Human and Tim an apology—I'm definitely a believer in trying things before you talk and I've spent my review career giving underdogs the benefit of the doubt, but this is absolutely one time when I was too complacent. In Too Human's case, I was content to trust the consensus and go along with the crowd, and that was wrong. I'm certainly not proud.

Hey Jay (and everybody else).

Thanks very much for the comments, I really appreciate it.

A lot of us TH fans have been through the same wringer that you put your friend Tim through. Good on you for putting in the time to learn that your initial impressions were incorrect, and based more on groupthink than on any firsthand experience. I liked Too Human a lot – while it has its fair share of flaws and overall was just too short, it was unique and different and interesting and it TOOK RISKS. A lot of those risks didn’t pay off, but you have to give Silicon Knights credit for taking them in the first place.… Read more »

“I remember back when I played Too Human, I was the recipient of more insults than I care to mention since I really liked the game.” That sucks! Although I’m sorry to admit I actually found that really amusing as well! Just started playing this game a couple days ago and am 20 hours into it and I liked it overall so far. One can really nerd out with spec’ing and with armor and weapons, similar to Borderlands in many respects. There are some annoying glitches and I don’t really like the way the game handles the camera during battles,… Read more »

I remember back when I played Too Human, I was the recipient of more insults than I care to mention since I really liked the game. I realize the game does have a few buggy elements, the targeting is a little difficult to figure out at first, and the stick based combat is very different from what most hack and slash games have been in the past (hint, don’t hold the stick in one direction). I notice that in most games the skills you get are of the vanilla “do more damage” variety, and while too human has plenty of… Read more »