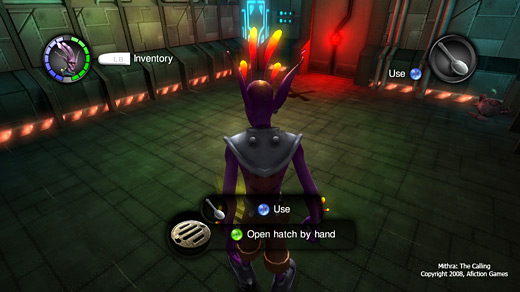 HIGH The puzzles all made sense, which is rare for the genre.

LOW Coming in under an hour, it's over too soon.

Something's going on in the Community Games area of Microsoft Live service. Although it seems not many people have been keeping their eye on it, I've noticed that this little do-it-yourself corner is starting to show promise of reviving genres that players had thought all but dead. CarneyVale Showtime was a kinetically quirky action game the likes of which haven't been seen since the SNES, Weapon of Choice breathed new life into the side-scrolling shooter, and now we have Mithra: The Calling to represent adventure games. It's heartening to know that regardless of what direction the industry takes, people still haven't forgotten its roots.

Starring an alien named Tag and his small, globular sidekick Vee, Mithra starts with the two of them in a jail cell trying to figure a way out. beginning in media res with no explanation or backstory the way it does, I couldn't help but have flashbacks to classics like Out of this World. In this particular case, I think that's a good thing. With a bit of experimentation, the pair find freedom and begin to explore the rest of the facility they've been imprisoned in.

Although the game definitely has minor rough edges like poor camera perspectives when trying to navigate a deadly laser puzzle or jumping that seems a bit off, the project is really head and shoulders above most of the Community crowd. The graphics are clean and attractive with an appealing art style, the game is presented in full 3D, and even sports actual voice-overs for all dialogue. It's hard not to notice the quality of work that went into the project.

The heart of any Adventure game, the puzzles, are actually quite good. They were very straightforward, and not at all obscure or illogical the way most games in this genre tend to skew. Another plus to its design, the developers graciously included checkpoints every time Tag enters a new room. There isn't a lot of opportunity for death but when it happens, I appreciate not having to go through a painful loading process to try again.

Demonstrating quite a bit of panache for such a small project, I quite enjoyed Mithra… for as long as it lasted, anyway. Billed as an episodic adventure in five parts, I got through Episode 1 in a little less than an hour. Although Afiction has gone back and added extra unlockables and Achievement-like goals that add value and playtime for those who want it, I was a little sad when the game announced that it was at its end. I could have easily devoured another hour or two.

Although I turned the console off wishing that Tag and Vee had stuck around a while longer, it's always better to leave a player wanting more—and in this case I definitely do want more. I'm hoping Episode 2 is on its way soon. Rating: 8.0 out of 10.

Disclosures: This game was obtained via paid download and reviewed on the Xbox 360. Approximately 3 hours of play were devoted to the single-player mode, and the episode was completed two times. There are no multiplayer modes.

Parents: This game is not rated by the ESRB, but personally, I would put it at the E 10+ level. There is a wee bit of violence if one of the guard robots zaps you dead (bloodlessly) with his laser beam, but apart from that I didn't see anything of any concern. There is no questionable language or sexual content.

Deaf & Hard of Hearing: You should be aware that Afiction Games deserve praise for taking action on one of the game's puzzles (based on audio tones) that was not solvable for gamers with hearing impairments. To their credit, they listened to my concerns and implemented a new visual representation (in addition to full subtitles) that makes the game completely accessible to everyone. Kudos, Afiction!