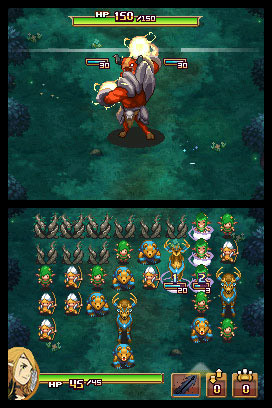 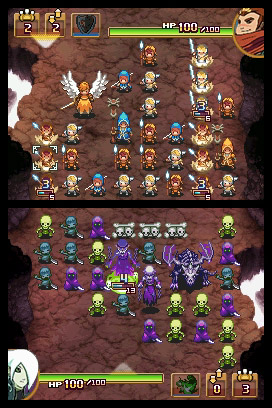 LOW Backtracking to a shrine to buy more minions.

WTF Why do I lose a super-unit if I remove it from the board myself?

Coming up with a new spin on the puzzle genre is tough. Coming up with something that's not only original, but also top-quality is even tougher. Based on the number of Tetris clones and match-three one-offs produced over the years, it's easy to see that a lot of developers are content to take the path of least resistance. However, every once in a while something comes along and stands out from the rest, commanding respect and demanding to be played.

Might & Magic: Clash of Heroes? Yeah, it's one of those.

It should be fairly evident to anyone that the true value of a puzzler lies not in the trappings, but in its core mechanics. What does it do, and how well does it do it? Surprisingly, Capybara Games has managed to craft something that not only delivers gameplay that's challenging and rich, but also satisfies in every other regard as well. Graphics, control, player amenities… everything has been carefully polished and honed to near-perfection.  Clash of Heroes is the total package.

Play takes place on both of the DS's screens—the player's field is on the bottom, the enemy AI's is on the top.  Rather than gems or blocks, Clash of Heroes capitalizes on its Medieval-ish fantasy setting and requires creatures of similar color and type to be grouped vertically. After lining up three green archers or three purple hellhounds, this active cluster counts down a predetermined number of turns before launching an attack on the enemy. Although weak footsoldier types are the most numerous, players can also acquire "elite" or "champion" creatures which are much larger and take up more space on the board. They're more difficult to use, but their power and abilities are devastating if activated.

The formula just described would already be enough to make a great game, but Capybara didn't stop there. Enhancing complexity in a positive way, creatures on the board can also be manipulated horizontally to create shields for blocking enemy attacks. Preventing the game from being all offense all the time, it's up to the player to juggle available creatures between attacking and defending. Adding yet another layer to the proceedings, there are special effects that can be used as an ace in the hole, entirely separate from the creatures on the board. One such twist lets players create a nearly-impenetrable shield to block attacks for one turn. Another sacrifices all unmatched creatures for a direct-damage fireball. There are several others over the course of the game, constantly requiring the player to re-think comfortable strategies. 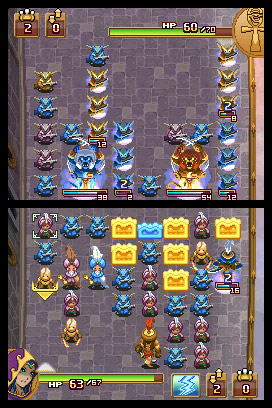 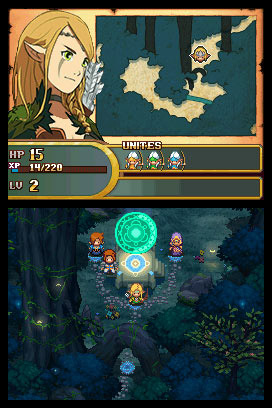 Looking strictly at its mechanics and how the puzzling works, Clash of Heroes is both intricately complicated and simple to grasp at the same time. The difficulty curve and the pace at which new elements are introduced is immaculate, the end product resulting in an exquisite balance between brain-busting strategy and free-flowing ease-of-play. Displaying a facility for process I've rarely ever seen developers pull off, Capybara makes the orchestration look effortless.

As I mentioned earlier, the game is formidable on all fronts, with every aspect displaying a smart level of detail work. The graphics feature charming, warm sprites with surprising animation and enough clarity to let the player discern which type is which with no confusion whatsoever. Menus are clean and straightforward, saving progress is allowed at any point, and players can cancel random battles at will. The choice between using the stylus or crosskey and buttons with equal efficiency was absolutely appreciated, and hell… the music's even catchy.

Shockingly, the substantial story mode is more than decent, featuring five distinct characters for the player to control, each with their own separate plot arc and menagerie of minions. It was a treat to see what sort of monsters I'd be working with next, and although it's not War and Peace, the saga easily kept my interest. It would have been acceptable to most to phone this part of the game in, but I was constantly greeted with clever lines and grin-worthy bits that didn't insult my intelligence. The writers did a commendable job.

In nearly every respect, Clash of Heroes stands well above the competition. My only complaints (it's too easy to lose super-units and backtracking to purchase more is mildly annoying) are so minor that they're not even worth discussing in detail. I have to say that it's something of a shame that Ubisoft didn't give the game more of a marketing push at release—it's one of the best DS games I've laid hands on in quite some time, and if a review copy had been sent out, it would have easily landed a spot on my list of 2009's best.

Although I wasn't able to give this game the recognition it deserved when last year's accolades were being handed out, I hope that this review (late as it is) makes up for that oversight in some small part. Skipping my usual witty remark or pun-laden ending line in closing, let me just say that Clash of Heroes is an absolute winner from start to finish. Any gamer worthy of the title needs to have a copy of this cart in their library. Buy it. Rating: 9.0 out of 10.

Disclosures: This game was obtained via retail store and reviewed on the DS. Approximately 18 hours of play were devoted to the single-player mode, and the game was completed. No time was spent in multiplayer modes.

Parents: According to the ESRB, this game contains mild fantasy violence, mild language and mild suggestive themes. The violence on display consists of cartoonish monsters hitting other cartoonish monsters with no blood or gore whatsoever. The suggestive themes are incredibly tame, and so is the language. In spite of the disclaimers on the back of the box, I would have no problem letting my son or other children play this game. It's pretty safe stuff.

Deaf & Hard of Hearing: You won't have any issues. All dialogue is delivered via text and since play is turn-based, there are no auditory cues necessary. In fact, I played the game for long periods of time with no sound whatsoever, and had no difficulty at all. Everything here is totally accessible.

Capybara is the coolest animal ever in the history of cool animals. Period.

Back to the game, found some problems in the balancing of factions and characters. Specifically, I think Nadia is by far the strongest and easiest to win a battle with, while Godric seems to be the weakest and unbalanced.
Small issues which can and will be solved in Clash Of Heroes 2, I’m sure.
RPG and puzzle gaming: who would have thought such a weird combination could have worked so well, giving us some of the best games in this generation?

So there I was, having a grand time playing through the campaign, when my game decided to glitch. I accidently saved, of course, and found that I had to start Clash of Heroes over and delete the 15 hours I had already put into the story mode.

You know what? I started again without hesitation! That’s how addicting this game is. After this and Critter Crunch, I can’t wait to see what Capy comes out with next.

To the above commenter… if you weren’t a fan of Puzzle Quest, that should not deter you from trying Clash of Heroes. The only similarity is in how you navigate the world via landmarks on an overworld map.

The gameplay couldn’t be less similar! Clash of Heroes if is a much deeper strategy title in terms of gameplay. The number of strategies and playstyles you can employ is truly amazing. This quickly became one of my favorite games of 2009.

I really want to find time to play this game. Although i was not a fan of Puzzle Quest maybe this game will tempt me into some portable gaming.

… this game really got me. The beginning felt dull and slow paced, the core mechanics not so appealing and the amount of stuff going on onscreen almost unbearable. I had troubles understanding how damage and attack turns worked, for example. Yet I endured because I read trustworthy reviewers praising the game, and boy was I rewarded. The amount of strategy needed to master a fight is enormous, to the point of being frustrating at times, yet the game never feels cheap – except maybe when you’re calling for reinforcements and they show up in the wrong place. But maybe… Read more »