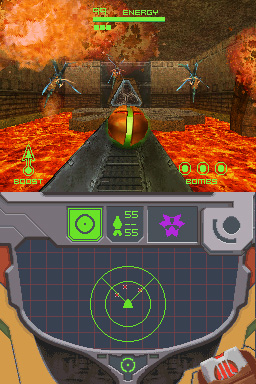 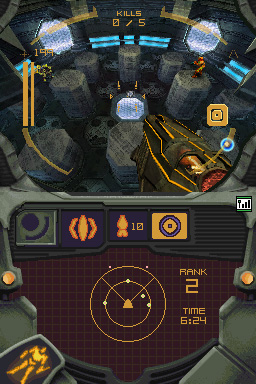 Bringing Metroid to three dimensions seemed like an impossible task, but it was done and done to perfection. After such an accomplishment, squeezing it onto the Nintendo DS seemed challenging, but not as vast a leap. Still, the question remains, is Metroid Prime Hunters a great game, or even comparable to something as universally acclaimed as the original Metroid Prime? Hunters probably won't go down as a notable in the videogame Hall of Fame, but both its quality and my level of enjoyment were higher than expected. If nothing else, Hunters establishes itself as a solid and important entry into the Metroid canon with new elements like peripheral characters and a revamped game structure packaged in a more streamlined, enjoyable adventure than its immediate predecessor. For that alone it deserves respect.

The single-player portion of Hunters stars series heroine Samus Aran on a mission to investigate a claim of (yawn) ultimate power in a far-flung arm of a far-flung galaxy. Using a first-person perspective for the majority of the game, this portable iteration continues the same successful tradition of exploration, platforming, and immersive sci-fi action the Metroid games are known for.

As long as the current generation of handhelds continues to eschew dual analog sticks, bringing first-person action is always going to be a problem. The PSP hasn't been able to resolve this issue yet, but the DS has come up with a decent solution. Movement is handled by the D-Pad, firing is assigned to the left trigger, and the majority of other functions are activated by use of the stylus (or thumbstrap) on the touchscreen. Although it's not as effortless or intuitive as having two sticks and a full range of buttons like a console controller, it does become manageable with practice. (There is an alternate set up using the A, B, X and Y buttons to look and aim, but it's not precise enough for practical use.) The physical shape and weight of the DS itself means that it can be very fatiguing to hold the unit and control vital functions with one hand while the other is dedicated to manipulating the touchscreen, so finding a comfortable way to sit should be a priority.

Once learning the unorthodox controls was no longer my main focus, I found it very easy to get into the adventure since the tone and atmosphere so richly illustrated on the GameCube have been captured. There are numerous small touches to be found that help enrich the believability of the different levels, such as corpses littering the site of a battle or harmless fauna scattered throughout empty hallways. But it's worth noting that although Hunters is a sharp-looking game and easily the strongest 3D experience on the DS, the textures can be rough and the character models and environments seem simple. Its appearance reminds me of the Sega Saturn, designed to be the ultimate 2D machine and hastily redesigned for 3D after the PlayStation tipped its hand. Those Saturn games never looked as good side by side with the PlayStation, and it's a similar situation comparing the DS and the PSP. 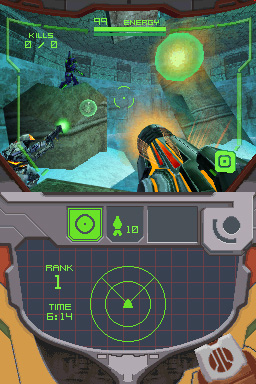 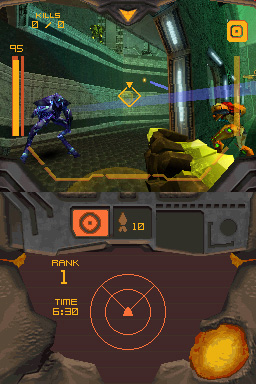 Graphics aside, one major area where Hunters breaks away from Prime and Echoes is in the overall scale. Rather than having one large, interconnected world, Samus can travel at will between four small planets. These environments have their own personality and are differentiated from each other well, but are much smaller than series fans probably expect. Personally, I found this to be a refreshing change of pace given that I look for slightly different qualities in handheld games, but some may be disappointed that the previously intense levels of searching and exploration have been reduced somewhat. Still, I think it's a very appropriate choice and one that I appreciated since it was never difficult to get back on track after being interrupted at work.

Unfortunately, although the core feeling of being a spacefaring bounty hunter is still present, the series' weak point—the story—continues to be as weak as ever. The plot is dull and extremely predictable, a state not helped by the lame storytelling crutch of having Samus scan bits of text information from the environment instead of having exciting scripted elements or expository cutscenes. Surprisingly, the game's biggest additions, the hunters, turn out to be non-events that add little to the experience.

For the first time, the Metroid series introduces six other bounty hunters, each trying to beat Samus to the game's "ultimate power." Interviews with developers have stated that they hope at least one of these rivals will be popular enough with players to spin off into its own series. Given that none of the six has any personality or dialogue, and act only as brief deathmatch-style diversions scattered throughout the game, it doesn't seem very likely at this point. It's a shame, since players have long asked for greater depth and development of the universe Samus inhabits. This could have been the perfect opportunity, but the attempt here feels very shallow and underdeveloped. (…And if any of the developers are reading, why does Samus earn weapons from random locations in the environment instead of from these enemies?)

Although Hunters doesn't stray too far from the formula that Metroid Prime established, it is different enough in structure and flavor to be worth a look for anyone who likes the series but was turned off by the derivative Echoes. It's also not a stretch to say that it is currently the best adventure game of its kind on the DS, and an admirable effort. Between this game and Metroid Prime Pinball, everyone's favorite armor-clad blonde has made a very respectable showing on the DS indeed. The Rating is 8.0 out of 10.

According to the ESRB, this game contains: Animated Blood and Violence

Parents don't have much to worry about. Most of the single player game is spent exploring corridors and blasting alien monsters and bad guys, none of it very graphic or detailed. There are no sexual situations, and there is no questionable language. However, be aware that the game is able to be played with other live people online, with voice chat enabled if the player so chooses. The usual caveats about playing with people online apply.

Metroid fans will definitely want to check the game out. Samus does not start the game by losing all of her power ups and abilities (yay!) and having rival bounty hunters is somewhat interesting, even if they are not very well developed. It's also very nice to be able to go into Samus' gunship at will and travel between planets at any time. It's not an RPG, but it's also not the standard Metroid game, either.

Multiplayer fans will be treated to a wide range of options and game modes, but be aware that these are only available if you have friends in the immediate vicinity. If you don't have anyone with a DS to play with, the only mode available for Internet play is a standard four-player deathmatch. It was easy to find opponents and once connected, I could see no discernible lag or technical issues. However, it was very disappointing to find that there were no options to include bots for simulated multi-play. Be aware that if you do not have an Internet connection, it's not possible to play anything but single player.

Deaf and Hard of Hearing gamers will have no problems. All information in the game is relayed via text and pertinent environmental data is usually displayed on the radar, available on the DS's touchscreen. Having some hearing ability might help pick up on activity during multiplayer, but it's not necessary during the adventure.