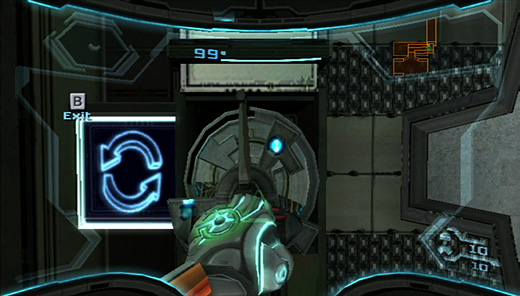 After an extended trek through the bloated and tedious middle of the Metroid Prime trilogy, the execrable Echoes, I was more than a little hesitant to start another session with the usually-enjoyable Samus Aran. After the last installment, I felt certain that Retro Studios had run out of ideas and lost the touch that originally brought this famously 2D series into the third dimension with such grace. After biting the bullet and giving it a try, I found that the end result was better than I had expected… though a bit too familiar.

In my view, Corruption is best described as an expanded version of Metroid Prime: Hunters, found on Nintendo's handheld DS system. Since I found that particular game's restructuring of the classic formula to be quite enjoyable, I mean this as a true compliment. Specifically, I admired the way Hunters introduced the ability to hop back and forth between planets, as well as the rogues' gallery of rival bounty hunters competing with Samus in that adventure. Such elements greatly enhanced the sci-fi themes that this series thrives on, and gave it a more logical, well-rounded quality. Corruption mirrors these enhancements and I'm glad to see that they've been implemented on a more powerful console that can do them justice.

The storyline, usually the Metroid series' Achilles heel, has also benefited from these changes. By including a cast of characters to both support the streamlined events and to explain how Samus receives some of her special ability upgrades, Corruption feels like a more convincing adventure. As a long-time Metroid vet who's been asking for most of these changes for years, I couldn't be happier. However, there are still several areas of design that adhere too closely to outdated concepts.

For example, the second half of the game lapses into the same tired "classic" backtracking and item-hunting that adds little except playtime, and most of the late-game abilities seem pointless except to progress past arbitrary barriers. These contrivances may be faithful to Metroid's original concept, but they're stale and unnecessary. I'd say it's high time the series gets a more thorough revamp in this regard.

There are some technical nitpicks to be brought up, too. Killers for me were the too-frequent pauses in the action while the console loaded areas behind closed doors. It wasn't game-breaking, but it was annoying to have my immersion constantly disrupted.

Additionally, the current system of infrequent save points in special rooms or at Samus' spacecraft needs to go. There were several times when I needed to stop playing in a hurry, yet I was usually several rooms (if not further) away from the ability to record my progress. In today's environment, it should be a simple thing to enable a quicksave (if not a full save-anywhere) for convenience's sake.

Finally, on the subject of controls, I was left with the impression that Retro has created the best possible first-person configuration on a piece of hardware that is simply not optimal—there's no getting around the fact that the Wiimote is tailor-made for stripped-down, basic player interaction. Trying to reach the crosskey's "down" direction or the plus and minus buttons in the middle of play was never comfortable, and it was extremely tiring to have the camera tied to the direction the Wiimote was pointed in. Not only did keeping the unit straight and still require more than the usual amount of physical effort, I got tired of having my view spin wildly every time I scratched my nose or adjusted my position on the couch. Like most of the Wii's other games, using a normal analog controller would have been preferable.

In the main review, Jason comes to the conclusion that Corruption is a well-polished expansion to the Metroid legacy. I agree, though I'd be hard-pressed to find any elements in the game that are new or original. Considering that the series has a storied history and celebrated status as one of Nintendo's core franchises, this isn't automatically a bad thing. Quite frankly, the developers had lost ground after their initial effort, so Corruption's return to form goes a long way towards making up for the errors last time around. That said, I won't be interested in the next installment unless a bigger shakeup to the formula takes place. Rating: 7.0 out of 10.

While I primarily agree with this review, I found the criticisms of the wiimote a little unwarranted. I own both the Wii and the 360, and have played both Call of Duty 4 and Halo 3 (especially Halo 3) offline and online extensively, and it is my opinion that these controls do not surpass those found on the wii. In fact, just the other day, I reconquered the campaign of Halo, and after realizing the extreme repetitiveness of the whole thing that I somehow managed to overlook as a younger gamer, I went online to check out the reviews. I… Read more »

hey Dean. I’ve been kicking around the ideas for a bigger blog post/article about the wii, but i haven’t gotten around to it yet. For now though, i guess i can say that after all the time i’ve spent with the Wii, i haven’t seen *any* use of the controls that rises above being a novelty. honestly. now, that’s not saying the Wii itself doesnt have merit — it certainly does, and the way it’s penetrated the market and captured the attention of so many is a discussion unto itself, so when i talk about the controls in this review… Read more »

“Like most of the Wii’s other games, using a normal analog controller would have been preferable.” Brad, you’re not just damning the game, you’re damning the entire console. Do you really mean this? Would you like to go on record about how the entire Wii endeavour is a mistake? IMO Wii is by far the most important console of this generation, even with all its flaws. It’s kind of a bummer that Nintendo isn’t doing much more with their core franchises this generation than updating the controls, and when the controls don’t work well, as in this game’s case, it’s… Read more »

Concerning button layout i agree, Nintendo the first time ever made some of their pad features worse.
Concerning being forced to aim at the TV all the time instead of being able to bum around on the couch i bear this happily because the wiimote aiming is just so much better than sticks can do on normal pads. It is the best possible compromise between casual fun (Pads) and accurateness (mouse).

Dean, I’m not seeing this as damning the game, or the system. He’s just making a statement that it would’ve been a little easier to use a classic controller or the Gamecube controller. this system has it’s flaws- I’ll agree with that- but he’s simply stating that more control possibilities would be welcome. He’s not saying the Wii is a mistake, nor is the Wii ‘snubbing’ hardcore gamers. I, myself, am a hardcore gamer, and I fell in love with the Prime series- and I’m waiting expectantly for Other M to be released. This game, like RedSteel, should only be… Read more »