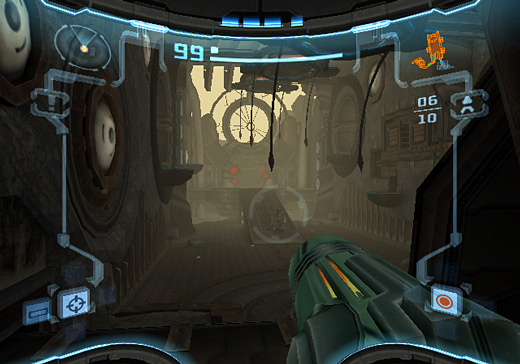 Andrew is entirely correct in saying that the first Metroid Prime was Nintendo's success story for the current generation. It defied all odds by being a truly great experience in the face of so many obstacles stacked against it, stuffing crow in the mouth of everyone (including myself) who thought that bringing Samus Aran to living, breathing 3D was an impossible task. On the subject of Echoes, however, Andrew and I couldn't have more diverging opinions. Where he has appreciation and tolerance, I have nothing but impatience and scorn. Simply put, Metroid Prime 2: Echoes was far and away the most tedious and inspiration-free game that I actually bothered to finish in 2005.

Instead of seeing Echoes as upholding and consolidating a legacy, I see it as a blatant cash-in on Prime's success. Its only reason for existence was to fill Nintendo's coffers with my money while offering an experience that was indistinguishably identical at best, and painfully unpleasant at worst.

Technically, Echoes is as polished and proud as Andrew claims. There aren't any rough edges or glitches rearing their ugly heads anywhere in the game's vast world. The graphics are nice, and the controls still work. The disc's biggest crime is not related to the quality of its production values, but instead that it does absolutely nothing that wasn't already accomplished the first time around. What reason is there to sit through hours of the exact same item-finding, object-scanning and constant backtracking when Prime did it all, and did it perfectly?

Conceptually, the logic behind the game's plot and world are junk, hardly making any sense due to illogical inconsistencies and contrivances. The formula in Echoes is exactly the same as it was before: find items, open up new areas of the map, find more items, and repeat until the end. Many will argue that this play progression is vital and key to the identity of Metroid, but I say that it's high time the series gets a shakeup. The biggest hurdle—establishing a three-dimensional translation of something that was so essentially 2D—has been cleared. For that, I still give much respect to Retro Studios. On the other hand, the fact remains that every Metroid game has basically been a repeat of the original NES classic with bigger this or better that, and in my opinion, a series so rich with potential has to move on and start covering new ground. As a person who has played every single Metroid game, I'm beyond ready to see Samus Aran start tackling new challenges, exploring new play structures, and starting off an adventure without losing all of her equipment which somehow gets magically scattered throughout the alien world I've yet to explore.

If I had never played Prime and didn't have any history with the series, I suppose my estimation of the game would be higher, but my patience would still have been sorely tried. The worn-out concept of a light/dark dichotomy only makes getting through the game's too-large map convoluted and troublesome, adding a layer of irritation on top of the process. The new limits on ammunition serve no purpose except to aggravate, and the game's eleventh-hour fetchquest after receiving the last suit upgrade was the most disgustingly blatant waste of time I've seen in years. Not only was this fetching (again) an exact repeat of something established in Prime, it was an insulting slap in the face, nearly making me quit the game once I realized exactly what it was I was supposed to do.

I love the Metroid series and Samus Aran will always be a character I want to see more of, but unlike Andrew I simply can't accept such a creatively bankrupt effort. Metroid Prime 2: Echoes takes "playing it safe" to an unhealthy level and turns in a performance that reaches for nothing and accomplishes even less. The rating is 5.0 out of 10.