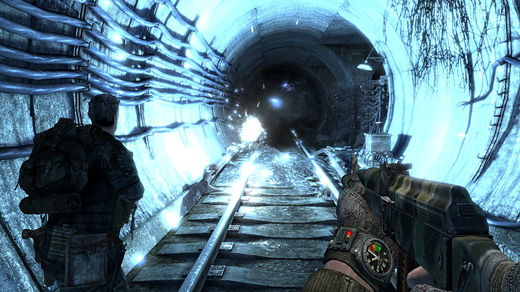 I’d heard a lot of positive buzz for the game before it came out, and while the positivity seemed to falter a little bit after release (my fellow GC'er @SparkyClarkson wasn’t too high on it) there were still plenty of people who said it was the goods.

I snagged a copy on sale and it's been sitting in my stack ever since, but with talk of a sequel coming later this year, I figured I’d better get cracking and play it already. I'm guessing I'm about a third or half through the game at the moment, and so far it's been an incredible experience.

More than anything, I admire the pacing.. I've heard that it falls apart once you get further in, but everything up until the point that I'm at now has been excellent. While it's structurally a FPS, the developers aren't afraid to take things slow and cultivate the incredibly rich atmosphere.

Combat comes in fits and starts, and when it does, it usually feels panicky and frenetic. Rather than one of the countless titles where the player runs and guns like an invincible superman, each encounter here feels very intentional, and significant. I believe it was @JKeverne who described it as being the "Demon's Souls of FPS games" and so far, I would say that's pretty accurate.

However, one downside (and it's a debatable one) is that the stealth elements I've come across are perhaps too "realistic", meaning they’re quite unforgiving and extremely difficult to pull off successfully. It's satisfying as hell when they come together, but I can see why people found them to be frustrating. I've only managed to get through one area without things devolving into a firefight, and that was after many, many attempts. If I had any complaint about the game so far, it would be the stealth.

That said, everything else has been just amazing so far. Great level designs, great concepts, fantastic atmosphere, mature and measured pacing… as I said before, I haven't completed the game yet, but everything I've seen so far has been off-the-charts awesome. If you haven't tried this one yet and you're the kind of player who’s open to an unconventional FPS with a brain, Metro 2033 is a must-play. 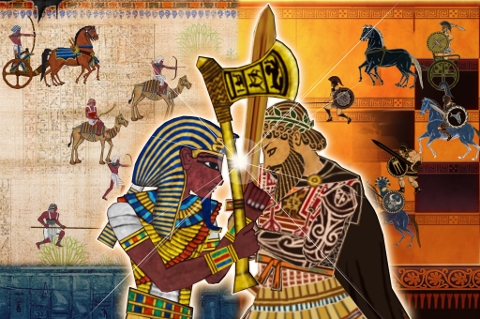 Just a quick shout-out for Alexandria Bloodshow here. Put out by Sega, it's a lot like Plants Vs. Zombies except that it replaces those elements with Egyptian and Greek armies.

The artwork is great (each army is rendered in the 2D style typical of its culture) and the game strikes a good balance between being complex enough to allow for some real strategizing and being simple enough to play on the go and in quick sessions. I've been playing it compulsively every day for a week, and I'm still not tired of it.

It's not perfect, though. Since it uses a vaguely CCG-like structure, the game is very slow to start since the player begins with access to a very limited variety of troops. One new card is awarded per match whether you win or lose, but this drip-feed slows growth of tactical options down to a glacial pace. There are several slots for different "decks" to be constructed, but even after all this time, I've only got enough cards for one really usable one.

Naturally, the player has the option to buy more cards with real-life money, but the cost seems quite steep and the cards are random. I would have much preferred some sort of in-game currency in addition to real-world purchasing to give the player more freedom in picking and choosing troops as they see fit.

It might not be everyone's cup of tea, but despite the issues I have with it, it's still a hell of a lot of fun and it scratches my strategy itch quite nicely. Plus, it's pretty cool to be able to summon wave after wave of mummies and send them shambling towards oncoming troops.

The PAX 10 have been announced, and I am quite happy to say that Containment: The Zombie Puzzler is one of the finalists. The game is currently available now via a variety of channels. If you haven't given it a shot yet, see what you've been missing.

I can't remember who originally shared this link with me (sorry!) but this quiz is to see whether you can tell if a "sexy" passage from a book was written by a man or woman.

The selections here are some real howlers—number 8 especially. I scored 8/10, but give it a try and see how you do. Warning, although there are no pictures, some of the text may be NSFW.

Loved Metro 2033, it had more effort put into it than the watered down Bioshock everyone seems to love.