An infographic built on the wrong information 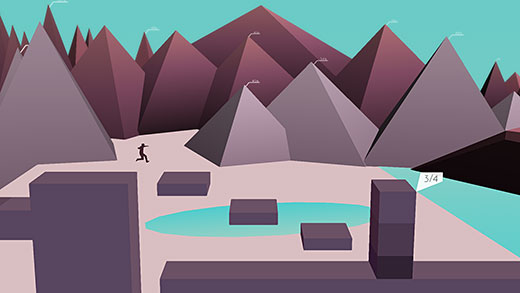 LOW World six killed every bit of good feeling I had for this game.

WTF Was it a requirement to use every possible input on the Vita?

It's not often that I rough out a fairly positive review, and then completely change my tune based on something at the end of a game. Unfortunately, that's exactly the case with Metrico, from Digital Dreams.

This intensely art-house puzzle title starts off with great visuals and a strong concept—the player's tiny character is lost in a world composed of bar graphs and numerics.  It feels cold and existential, and seems to suggest a bit of commentary about modern life.

However, the developers of Metrico were trying for more than just a clever puzzle game; they also set out to integrate all of the various hardware features of the Vita, and this is where things go horribly wrong. The early levels are elegantly appealing, but its charm diminished with the appearance of each new hardware gimmick, culminating in a final level that made me want to toss my Vita out a window.

When Metrico starts, it wants the player to figure out the relationships between things in order to progress to the exit of each area. Jumping will raise a platform here, or walking a certain distance will lower a platform there. Moving to the right might make a block move out of the way, and at other times, might cause one to obstruct the path. Careful observation and intentional movement is rewarded, and the relationships between the character and the objects in the environment are usually clear to see with just a bit of study. Initial progress comes quickly, and it feels earned.

However, although I enjoy creative and experimental games of the sort that Metrico appears to be, one thing I absolutely have no tolerance for are ideas that interfere with the player's interface. For example, I can't stand motion controls because they're not specific or accurate enough, so integrating things like the Vita's gyroscope and its rear-facing camera are not usually welcome.

For example, it's not long before Metrico requires the Vita to be tilted a certain way in order to raise or lower platforms, but my unit kept getting disoriented and I would have to contort myself into strange positions to get it to work—it's unnecessarily awkward to hold the unit upside-down while still trying to make a successful jump, and gives me a hoop to jump through that doesn't need to be there. From there, things only get worse.

Metrico doesn't use any language in the game or menus, so it relies on symbols to explain what it wants the player to do, and it's precious little explanation at that. I was often unclear about what the game wanted of me, and while it's fair to require a bit of experimentation, the title goes just a bit too far. When the camera function got added to the mix, I had no idea what it was being used for. Was it wanting light? Darkness? Motion? It was a frustrating mystery.

I continued to muddle through and eventually got to a puzzle that wanted me to face the camera at specific colors in my real-world environment in order to pass. When pointing at something red, one column would raise. Pointing the Vita at something green lowered another. The problem was that I wasn't near any objects that met the correct criteria for shade or hue, and it was impossible to move on. I suppose this seemed like a clever idea at some point, but when cleverness starts to interfere with the ability to actually play the game, a line's got to be drawn.

I continued to struggle with Metrico and eventually got too annoyed trying to figure out whether I was supposed to move, tilt, find a colored object, walk, jump, or some combination of other actions for each new puzzle, and my appreciation for navigating its intriguing world of bar graphs and hard information was thoroughly soured by the end. With a bit of restraint and more focus on the types of relational challenges that it does well, Metrico would have been an easy recommend to fans of the fringe. In its current state, it's an aggravating equation that produces unhappy results. Rating: 5 out of 10


Disclosures: This game was obtained via publisher and reviewed on the Vita. Approximately 7 hours of play were devoted to the single-player mode, and the game was not completed.

Parents: According to the ESRB, this game contains: mild fantasy violence. It's about as harmless as games come, with nothing but silhouettes and colored blocks. Totally benign.

Deaf & Hard of Hearing: There's no speech in the game, so there's no story to miss out on. There are also no audio cues necessary for play and the music is very irritating, so you're actually playing in the optimal way with the sound off.

Looks like the game was diminished by developers too focused on innovation for innovation’s sake. That being said, I still would like to try it out. Maybe I’ll look up a walkthrough on Youtube or GameFAQs so I don’t get stuck in some of the areas you had trouble with.

I will say that if they’re going to make a game that uses the Vita’s light sensor, maybe revive the Boktai franchise.