You Dug Your Hole, Now Be Bored in It 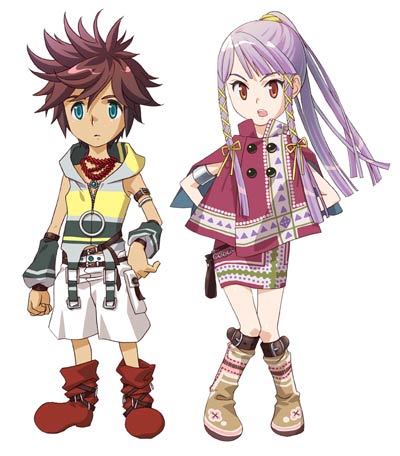 HIGH Some of the writing elicits genuine chuckles.

WTF Since when did cooking replace leveling up?

The latest DS offering from fan-favorite publisher Atlus, Master of the Monster Lair is another unconventional game which defies easy genre classification—something I can always appreciate. However, though it earns points for coloring outside the lines, it doesn't have enough variety in the formula to push it into must-play status. It's definitely quirky and interesting, but repetition and an emphasis on grinding for money and items dampen the appeal.

There's a silly, nonsensical story about attracting tourists to a small village and boosting the local economy by building a creature-filled dungeon in Master of the Monster Lair, but it hardly takes itself seriously and the players shouldn't, either. (Kudos to the translation team, however… as weak as the plot is, Atlus proves once again they've got the best heads for this sort of work in the business.)

With little to hook a player dramatically, it falls to the gameplay to do the brunt of the heavy lifting and unfortunately, it's not really anything to write home about. The active phrase in this case: relentless repetition.

Taking magic shovel in hand, main character Owen sets about digging a series of tunnels and rooms in the caves next to the town where he lives. After excavating a suitable network of passageways, monsters appear overnight to populate the dungeon. The next day, Owen must eradicate the tenants he's invited to collect items and money. When the dungeon reaches a certain threshold, a boss monster appears and a ladder leading to the next floor opens up after its defeat.

This formula has been attempted in the past by a small handful of other games, and I will say that Master of the Monster Lair is a little more user-friendly and approachable than the competition. Unfortunately, the concept of being a "Dungeon Master" in this sense is inherently flawed to start with. It seems like a faulty bit of logic to make a player design a level and then play through it, let alone repeating it the amount of times necessary to keep advancing in the game. 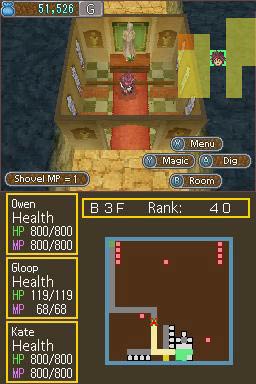 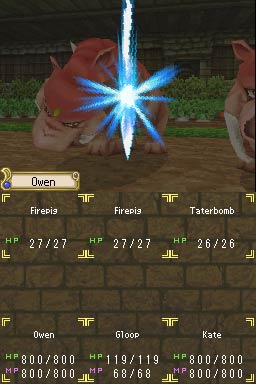 Since I make the dungeon, there's no real feeling of exploration. Since I dig the rooms, I have a pretty good idea of which creatures will appear and what treasures I will collect. There's no sense of surprise or discovery. The townsfolk occasionally make requests such as "I want to eat a Spook Tart", which then requires me to construct a specific structure to attract a Spook and then harvest its tart (don't ask), but that's about as complex as it gets.

The gameplay arc present in Master of the Monster Lair becomes readily apparent in the first 20 minutes or so, and it's just a matter of repeating these actions on an ever-increasing scale until the end—dig tunnels to house monsters, kill enough monsters to earn the money for expanding the tunnels, defeat the boss to move on to the next floor…wash, rinse, repeat. Essentially, the player is tasked with crafting their own grindstone and then chaining themselves to it.

There's a fairly interesting system of cooking recipes to increase Owen's stats, but since the ingredients are harvested from monsters, the developers have chosen to omit experience earned through combat. Rather than being a way to boost character development, it's just a substitution of one repetitious system for another in a game already overflowing with it.

The few high points like clever dialogue and a companion slime monster that increases his abilities by mimicking monsters in combat are nice, but these little pinpricks of light aren't enough to outshine the amount of time spent fighting the same enemies over and over in a dungeon of my own design, only to level up and do the same thing again on the next floor down.

The very definition of the play in Master of the Monster Lair hinges on repeating the same actions to meet arbitrarily-set goals, so only the most boredom-resistant players need apply—fans of farming sim Harvest Moon looking for a different type of crop to harvest might want to check it out, but players wanting something a little less grind-happy in terms of design should look elsewhere. Rating: 4.0 out of 10.

Disclosures: This game was obtained via the publisher and reviewed on the Nintendo DS. Approximately eight hours of play were devoted to the single-player mode and the game was not completed. There are no multiplayer modes.

Parents: According to the ESRB, this game contains language and mild fantasy violence. I'd say this game is definitely safe for most players. The violence is not graphic in any way, and the language is milder than you see on the average sitcom.

Deaf & Hard of Hearing Gamers: Since this is a turn-based game in the RPG style, there are no auditory cues crucial to gameplay, and all dialogue is delivered through text. No difficulties here.

For a game about content-creation (the dungeons), it doesn’t sound like Global A (the developer) put as much thought into making it the fun part of the game even though it would be the most dominant.

Maybe a Grandia-esque combat system would have made the combat a little less repetitive. Just my 2 cents and plea for more developers to improve upon or just copy the Grandia combat system and spare us from their boring RPGs.