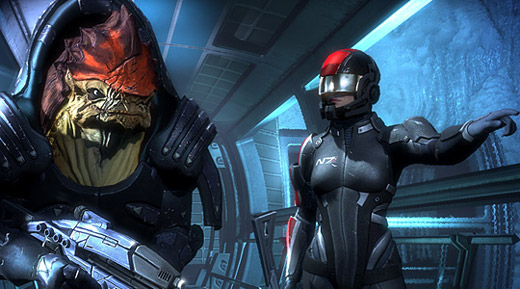 So, I'm replaying Mass Effect. Why? Well, I had no plans to. I had a blast playing it the first time through, felt totally satisfied, and was greatly looking forward to the next installment. Over, done with, finished.

Now that Mass Effect 2 is almost here, the chatter around it is starting to grow. With the knowledge that events in the sequel change depending on the choices that were made in the first game, my inner complete-freak began doing its thing and I found myself helpless to resist the compulsion to play through the game again just to be completely sure that all of the quests that might be significant later were completed the way that I wanted them done.

I haven't touched the game since the craptastic Pinnacle Station DLC came out, so going back into the adventure proper has reminded me all over again of why I put it as my second favorite game of all time. It still looks great, it still plays great, and I can't get enough of the Sci-Fi themes. One of the best 360 games? Absolutely.

Even though Dragon Age: Origins is BioWare's latest and greatest (and a fine game despite having issues) ME pretty much blows it out of the water in every respect, as far as I'm concerned. It was also sort of jaw-dropping To see how much better Mass Effect looks despite coming out years before Dragon Age. Playing the two back to back, the difference in the amount of resources put into the games becomes instantly apparent. No offense to Dragon Age devotees (and really, I enjoyed quite a bit) but it feels totally ghetto compared to the sheen and polish Commander Shepard is sporting.

Things are progressing at a rapid clip since I basically already know what I'm doing and I started a new game with my old data, meaning that my character has top-notch armor and weapons, along with all of the skills she accumulated during the first playthrough. Slaughtering those Geth has never been easier. All's well and good, except for a little bit of info that my good friend @ParkerXL laid on me…

Apparently, Mass Effect 2's wild, new character named Subject Zero is based off of a person that you can encounter in the first ME, but only if you chose the Colony origin. My Commander Shepard was Earthborn, so I never saw that particular side-quest, or that person.

My gut is telling me that BioWare wouldn't completely lock away a character in the sequel based solely on a very minor decision made at the start of the first game so long ago, but then again, my complete-freak is a little horrified that it might be the case. On the other hand, it was possible to collect every party member in Dragon Age regardless of what the origin chosen was, so I'm hoping that holds true again here.

I guess I’m the heretic here, because I didn’t care for Mass Effect at all. That’s not to say that I didn’t like the setting, but I thought BioWare did the least interesting things possible with what they had created. Call me when they make a game set on the Citadel, with less shooting and more talking. I’d be up for that.

@Sean: Oh, yeah, I definitely agree. That conversation made me personally not like her, due to my own background, but I do appreciate that they gave her a perspective that is somewhat unexpected in a science fiction video game. After all, if I were enamored of every character in the game, that would be boring! BioWare seems to be taking that idea even further for ME2, which is one of the reasons I’m looking forward to it.

I’m actually finding myself liking Dragon Age more and more, to the point where I’m really questioning if I think Mass Effect is better. A 2nd op may be on its way.

Also, Brad, you’ll have to email me the quest that you screwed up my missing one line of dialogue I’m pretty far in and I haven’t encountered it yet.

Alex: But she completely lost me when she went all “persecuted Christian” on me. That is a serious pet peeve of mine as an atheist, since people act like that in present-day US, which is just absurd. Although that very well COULD be the situation in the Mass Effect universe, it was still enough to irritate me. Isn’t that interesting? I’m an atheist myself, and that was the point where I found her most interesting. Religion is basically a taboo subject in games. Stuff like the Hanar is fine, but they basically made Ashley a Western monotheist (probably a Christian)… Read more »

[quote=Li-Ion] Only one crewmember died, Kaiden of course. There was no room for a second awesome dude so he had to die 😉

Heh, I loved Ashley at first. She kicked ass and her conversations about sexism and the military were great. But she completely lost me when she went all “persecuted Christian” on me. That is a serious pet peeve of mine as an atheist, since people act like that in present-day US, which is just absurd. Although that very well COULD be the situation in the Mass Effect universe, it was still enough to irritate me. This reminds me that I should do my Renegade playthrough before ME2 comes out… I was going to romance Liara but her fawning over Shepard… Read more »

I found Ashley racist and I’m not a fan of too religious types either. The fact that she “couldn’t explain” why she’s racist made it worse for me. My Sheperd looks like Wesley Snipes in Demolition Man: Earthborn – Sole Survivor – Soldier – Male – Renegade (just about 50%) and choose Liara. Only one crewmember died, Kaiden of course. There was no room for a second awesome dude so he had to die 😉 I reinstalled Mass Effect some weeks ago and started another character with the idea of trying to be nice this time. Military – War Hero… Read more »

Really? I liked Ashley, in spite of her mild xenophobia. (Which is there, but she herself notes that she thinks it’s irrational. “You ask me to kiss a Turian, I’ll ask ‘Which cheek’?”) She’s at least got some spirit, which is more than I can say for the painfully dull Liara. I tried on my second playthrough to have a relationship with Liara and just couldn’t. I went back to Kaiden in a flash. As for me: Colonist – War Hero – Engineer – Female – Romanced Kaiden – 100% Paragon and, much like you, I won’t spoil which one… Read more »

Earthborn – Sole Survivor – Soldier – Female – Bagged Liara (Ashley was too racist/ugly) – 98% Paragon – and although I won’t spoil who it was here, I will say that only one of my crew permanently died. = D

Sorta wondering if you love interest from ME1 survives, how that factors into starting a new relationship…

OK, fine, but what about the second bit? War Hero (I picked that), Sole Survivor or Ruthless?

Hey Brad! As it happens, I did choose colony origin, so I can tell you it’s incredibly likely she’ll show up no matter what. Given that you can actually kill the person she’s based off in that subquest, I think Bioware would have had to have given themselves an ‘out’ for it, surely.

As a sidenote, though? That subquest is possibly the most emotionally gutwrenching in the game. It was really, really well done.

(Which origins did you pick?)

I’ve been eyeing my Mass Effect box since picking up a new computer a few weeks ago. I want to have another go-through with a different background and class. Problem is, I still have to finish Dragon Age, and I’m picking away at a few other games as well.

And with Steam and D2D offering good deals on games every other day, it’s hard to justify going back to a game I’ve already completed. However, with Mass Effect, I think it’s worth it.