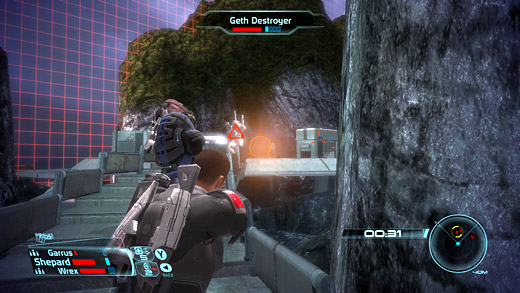 WTF Why in the world was this even released?

So, out of my ten-year career reviewing games professionally, I've only awarded two perfect "10" scores. I'm no math whiz, but if you average that out, I'm pretty sure that's one for every five years. My point? I don't hand out the highest honor lightly.

One of the games to which I gave top marks was BioWare's Mass Effect. Encapsulating everything I love about video games, action, and sci-fi in one complete package, I devoured every last tasty morsel. I couldn't get enough. Although it's true all good things come to an end, thanks to the current trend of releasing post-game Downloadble Content, good things can keep going for a little longer. More Mass Effect? Yes, please.

The first piece of DLC, Bring Down The Sky, was short and felt a little cobbled together, but it was basically another chunk of what I was looking for. A few quick missions, some dialogue and choices to make, and another opportunity to put my own personalized version of Commander Shepard through her paces. It wasn't mindblowing, but it was good enough. Besides, BioWare had promised at least two pieces of DLC before the launch of Mass Effect 2. I still had (at least) one more to look forward to, and surely, that one would be a home run, right?

After months of nearly total silence on the final add-on, it appeared on Xbox Live with not a whisper of fanfare or forewarning. Catching me completely by surprise, I drove home at the first opportunity, breathlessly queued it up for download, and was… absolutely disappointed.

Titled Pinnacle Station, the new content is essentially a tiny base that Shepard can enter. There are no new alien races that I noticed, no moral choices, nor any quests to undertake. No tasks, no jobs, no missions… instead, Pinnacle Station is a bunch of combat-driven time trials that players can enter and attempt to rank on a leaderboard.

Although there are a few different types of trials, they all boil down to being something that feels completely out of place and inappropriate for a story-driven RPG like Mass Effect. Time trials? Really? After all these months of waiting and looking forward to getting back into one of what I consider one of the best games of the last decade, the brightest idea BioWare came up with was time trials? In recycled environments, no less.

Adding insult to injury, the content is choppy, extremely buggy and glitch-prone. Out of five separate attempts, I was not once able to complete a single round of combat. The first time, my character inexplicably became unable to move and I was reduced to an immobile gun turret. During my next try, the game simply froze. The time after that, I went into the menu screen and the game froze again, necessitating a full hardware restart. Reviewers have a responsibility to go into a game and evaluate it for what it is, but when a reviewer is literally not able to finish the content in question due to its poor quality, any obligation to see it through to the end goes out the window.

I think it's pretty clear that I hold Mass Effect in the highest possible regard, having nothing but the utmost respect and affection for it, but I need to be honest when I say that Pinnacle Station is not only a complete waste of money, it's an insult to Mass Effect itself. I can't imagine why this shoddy cash-in was even released at all, except for a quick infusion of ill-gotten income from all the suckers like me who bought it on faith. Rating: 0.0 out of 10.

Disclosures: This game was obtained via paid download and reviewed on the Xbox 360. Approximately 45 minutes of play were devoted to the single-player mode, and the content was not completed. There are no multiplayer modes.

Parents: According to the ESRB, this game contains blood, language, partial nudity, sexual themes, and violence. Since this game is definitely aimed at mature audiences, all the usual caveats apply. However, most of these warning tags apply to the core game itself, and not this DLC in particular. Specifically, this DLC contains a metric ton of gunplay, but that's about it.

Deaf & Hard of Hearing: You should be aware that the dialogue and speech in the game is subtitled, and there are on-screen indicators that clue players in to when they're under attack. There are no problems with communication or audio cues.

i agree it was not mindblowing. I’m the kind of player who like to feel immersed into game, i like very much ME, i’ve spent many time on enjoying landscapes and views in ME… So i really really like the reward of completing all the tasks. I dont know but i played me 3 times and finally in that house you get on a colonized planet with that beautiful view, i found peace… and now i wont play until me2. NOw i feel i’ve finished. so i liked it! it worth the money spent. ciao

I couldn’t agree more with your review of Pinnacle Station. However, I’m glad that you mentioned how great a game Mass Effect is (minus this DLC). Your original review of the game basically summed up the impact ME had on me back in ’07. You’re probably one of the only gaming journalists, professionally, that see Mass Effect in the same light as I do. Sure, they (the journalists) all praised Bioware’s epic RPG, but many of them failed to see what set Mass Effect apart from other RPG’s of its time, or any game at all for that matter. Mass… Read more »

So glad I read this review before wasting $5.

DLC is mostly worthless since games are rushed and the DLC is basically left out content…. and they still wont patch and polish a game with the DLC….. everything is put aside for either getting the game to market or DLC so they can milk it for all its worth.