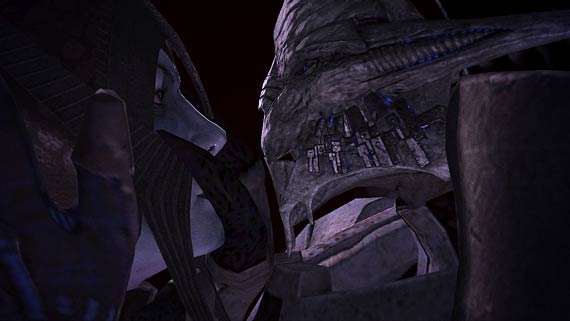 Parents, this game is mature in the best possible sense of the word. Characters have issues that the adults can easily relate to, the dramatic events in the story are handled quite seriously, and although there is explicit violence (guns, blood, and a wee bit of gore) and not-so-explicit but still quite obvious sexual content (straight or lesbian), this game is clearly intended for older audiences. It's an amazing experience and one I highly recommend, but maybe not so much for the kiddies. Get it for yourself now, and let them play it once they're old enough later.

Action gamers and RPG fanatics, this game strikes a near-perfect balance between your two respective genres. The combat is in real-time, and strongly resembles the action seen in Epic's Gears of War with its over-the-shoulder third-person perspective. Although RPG-style customization is present, it's not as deep or as micromanaging as some players would likely enjoy. Mostly related to stats and modifying equipment, it's good, but not the core of gameplay. Don't come here for hardcore shooting action and don't come here for item-management and random battles, but if you're after an amazing adventure that currently has no equal, Mass Effect is your ticket.

Deaf and Hard of Hearing gamers get much love from BioWare. Every bit of dialogue and speech in the game is subtitled, and the lip syncing is almost good enough to lip-read off of. I may be exaggerating a little bit on that last part, but there are absolutely no problems with accessibility with regard to this story, and there are on-screen indicators that clue players in to when they're under attack. Jump in and have no fear, there are no problems with communication or audio cues.