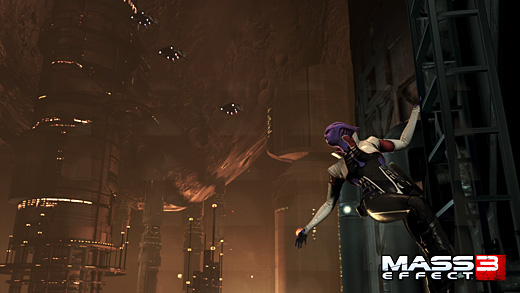 HIGH "Time to find allies… The story of my life."

LOW Coming back to Mass Effect 3 for pre-ending DLC felt more than strange.

WTF Where the hell was Aria's couch?

While it might be too soon to talk specifics about the ending of Mass Effect 3 (Sorry, Rowan) it's commonly known that heavy stuff went down. The game's finale sparked fierce controversy and impassioned discussion among fans everywhere. There was even extreme action taken, including a highly-publicized complaint to the FTC, and the creation of unplanned content which modified the original ending.

After such an intense conclusion to the trilogy (in the real world and without) it feels more than a little strange to play new DLC taking place before the campaign's end. After the drama, the heartache, and the endless angst on all sides, how can anyone possibly go back to a time before it all changed? However, that's exactly what Mass Effect 3: Omega

asks… and truth be told, it's not bad at all. It might be a little late, but it's not bad.

This add-on is a standalone mission unrelated to Mass Effect 3's main "fight the reapers" plot. The premise is that Aria T'Loak has been booted off of the Omega space station by invading Cerberus forces, and she'll do anything within her power to take her territory back—even going so far as to not-so-humbly ask for Commander Shepard's help.

The download itself is substantial in size, which makes sense since there are plenty of action-packed cutscenes, fully-voiced dialogue, and the same generally high production values that players expect from Mass Effect. Although the levels are linear in nature, the stunning backgrounds of the Omega skyline and a subterranean mining operation do a great job of masking it. This add-on has no problems matching the general level of quality found in the core adventure.

In terms of firsts, Omega is notable for giving players the chance to spend time with Aria as an actual squadmate, complete with her own skill tree. It's also notable for containing the first female Turian the series has ever seen. Newcomer Nyreen Kandros is a tough, likable warrior firmly rooted on the Paragon side, and a good foil for Aria's deep Renegade tendencies. (Also, as someone interested in exploring concepts in alien physiology, I was quite pleased to see that her armor didn't sport huge breasts.) While adventuring with this odd couple, Shepard will find herself frequently caught between their opposing viewpoints, and the developers provide a few opportunities to choose one side or the other.

In terms of things that will carry over to the main game after this three-hour DLC is completed, there are a number of new weapons and mods to experiment with, in addition to two new Biotic powers: Lash and Flare. The latter will probably be of particular interest to people who haven't completed the game, or to those who plan on a replay. Once fully powered-up, it unleashes an enormous energy explosion that deals devastating damage and can take out huge groups of enemies in one go. It also… makes me smile.

From the rousing space battle at its beginning to the surprisingly intense firefight at its end, Mass Effect 3: Omega

is just the sort of add-on that I would want for a game of this kind… apart from the fact that it's a bit mindbending to revisit a virtual time and place that had such an unforgettable final act. I might still be trying to wrap my head around it, but I enjoyed my time with Aria and Nyreen just the same. Rating: 8.0 out of 10.


Disclosures: This game was obtained via publisher and reviewed on the Xbox 360. Approximately three hours of play were devoted to the single-player mode, and the content was completed. There are no multiplayer modes in this DLC.

Parents: According to the ESRB, this game contains blood, partial nudity, sexual content, strong language, and violence. Although all of these warning tags are accurate, I don't feel that this game is anywhere near being the most offensive or harmful thing on the market. All of the subject matter is used in the proper context, and the game itself is definitely aimed at mature players. It's a great experience and one that I would recommend… although not to children. Moms and dads, keep the little ones away and play this yourself.

Deaf & Hard of Hearing Gamers: There shouldn't be any issues to be concerned about here. Subtitles are available for all dialogue, and even though the combat happens in real-time, I never found any of the audio cues to be important or beneficial. When I couldn't find enemies, it was more effective to watch where my teammates were aiming than it was to try and listen for gunfire. In my opinion, the game should be totally accessible to hearing-impaired players.