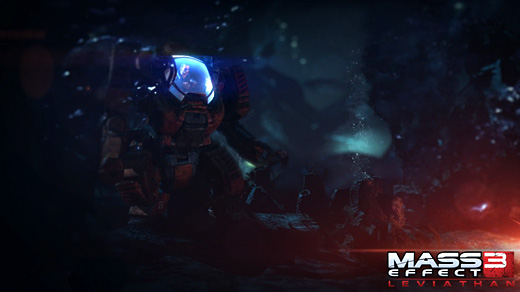 HIGH It's a well-rounded and substantial add-on.

LOW It's tough to revisit the game after the controversial ending.

WTF It really takes Shepard too long to figure this out.

Let's get the obvious out of the way: Mass Effect 3

Any player who took the most recent trip on the Normandy can attest to that fact. Whether they agreed with the incredibly controversial ending or not, the saga of Commander Shepard came to a close. The doors were locked, and the lights were turned off. Thanks very much.

Since Mass Effect 3 came to such a hotly-debated and "creative" conclusion, it's extremely hard to return to it for a Downloadable content (DLC) mission that takes place in the middle, not to mention it's been about six months since it was released. I'm not a huge proponent of day-one DLC, but I prefer add-ons to become available before I forget what the controls are and pack the game away in storage.

From this perspective, it's obvious that Leviathan comes preloaded with a lot of baggage that has absolutely nothing to do with the quality of the content itself—which is a shame, because it's actually quite good.

Like most Mass Effect DLC, a new mission appears on the galaxy map and the player is free to visit it at their discretion. In this instance, the story is that a scientist has discovered some sort of creature which has killed a reaper, so naturally, it's up to the player to recruit this mystery being as aid in the game's epic fight for survival.

The thing that stands out about Leviathan is that it feels a bit like a detective story as Shepard & Co. are trying to figure out the clues that will lead them to this secret thing. The amount of dialogue and cutscenes surprised me, and for the most part, it was all very well done. There was even one Renegade-optional sequence that had me second-guessing myself for a few moments.

Leviathan isn't all talk, though. BioWare has done a great job of including combat sequences that look great and feel fresh by continuing to avoid the tedious corridor shootouts that plagued Mass Effect 2. In one memorable scene, Shepard is scaling the crumbling ruins of a research facility on the side of a cliff. In another, she's on the deck of a floating derelict, bobbing up and down on a vast ocean. It's all quite pretty, and does a lot to mask the basic structure of the skirmishes.

Production values aside, the most important part of any DLC that ties into a campaign is, of course, how important it feels in relation to the rest, and whether it makes sense. I won't spoil how Leviathan resolves itself, but I will say that it does come off a bit like the developers are taking a second stab at elaborating on the game's ultimate ending.

Whether this is good or bad depends on how any given individual reacted to the conclusion in the first place. As for me? I was fairly satisfied originally, so the conclusion to Leviathan felt a little redundant… possibly even irrelevant.

is a must-see. For players who've wrapped Commander Shepard's adventure and long since moved on, there's nothing here that truly warrants reopening those old wounds, although it remains an interesting, well-crafted quest in and of itself. Rating: 8.0 out of 10.


Disclosures: This game was obtained via publisher and reviewed on the Xbox 360. Approximately 2.5 hours of play were devoted to the single-player mode, and the content was completed. There are no multiplayer modes.

Parents: According to the ESRB, this game contains blood, partial nudity, sexual content, strong language, and violence. Although all of these warning tags are accurate, I don't feel that this game is anywhere near being the most offensive or harmful thing on the market. All of the subject matter is used in the proper context, and the game itself is definitely aimed at mature players. It's a great experience and one that I would recommend… although not to children. Moms and dads, keep the little ones away and play this yourself.

Deaf & Hard of Hearing: There shouldn't be any issues to be concerned about here. Subtitles are available for all dialogue, and even though the combat happens in real-time, I never found any of the audio cues to be important or beneficial. When I couldn't find enemies, it was more effective to watch where my teammates were aiming than it was to try and listen for gunfire. In my opinion, the game should be totally accessible to hearing-impaired players.

Sorry Brad, but I have to disagree with you on some points. While I agree that this is a good DLC. It has some serious flaws. First, some of the cutscenes feel very.. lazy. One time my character shoot a burst with a sniper rifle like it was an assault rifle, and the animation “jumping” is still present from the original game, though luckily these bugs are much rarer now. [quote]I will say that it does come off a bit like the developers are taking a second stab at elaborating on the game’s ultimate ending.[/quote] You’re kidding, right? You mean… Read more »