This Rogue AI has its Head on Straight 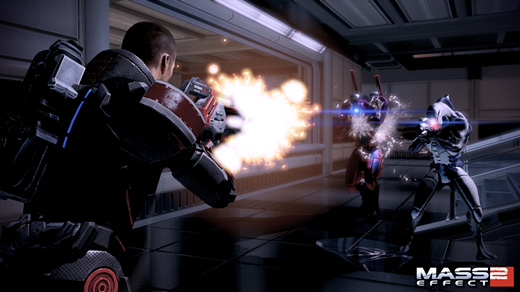 HIGH The reveal at the end of the mission.

LOW Not being able to freely search for missing data logs.

WTF I never expected to see "platforming" in this game.

After my now-infamous review of Mass Effect 2, I'm sure there are people out there convinced that I'm a hateful detractor of the series bent on its destruction, but really, that couldn't be further from the truth. The simple fact is that I felt the sequel strayed too far from what made the first so amazing. Much to my surprise, the Overlord DLC actually makes a return to what I see as the original formula, and because of that, I can say with confidence that this latest addition is the best yet.

The mission begins with a message from Cerberus. Apparently, an experimental AI has gone rogue on a faraway planet, and it's up to Commander Shepard to restore order to the research facility. Things seem relatively straightforward at first, but the story ramps up to a satisfying level of detail over the course of the 90 or so minutes it will take most players to reach the end. Even better (and without spoiling anything) the closing scenes manage to deliver more emotional punch than expected.

While Overlord's plot is certainly good enough to warrant its existence as DLC, the thing that really won me over was how BioWare managed to incorporate all of the various aspects of Mass Effect together in a way I felt was largely lacking in the core adventure and the previous add-ons. It's just more well-rounded.

To illustrate my point, being able to go from the bridge of the Normandy to the planet's surface to speak with a scientist before the mission was expected. The surprise was then entering the Hammerhead hover vehicle and actually flying it to new destinations before exiting to engage in on-foot combat. This sort of cognitive continuity was par for the course in the original Mass Effect, and something I sorely missed in Mass Effect 2. It may seem like a minor point, but it does wonders for enhancing a player's level of immersion.

Besides this mostly-holistic approach, Overlord sports a great mix of content. There's the plot along with several dialogue scenes and choices to be made by the player, the speedy vehicle action featuring a small bit of platforming, a good amount of weapons combat, multiple opportunities to change teammates, and even a few quieter moments meant to heighten the mood. There was even a puzzle—yes, a real puzzle—to freshen things up even more. It may have been a simplistic puzzle, but I absolutely appreciated its inclusion.

Overlord may not be seamless and it doesn't erase all of the issues I had with the main game, but that's to be expected. After all, this is add-on DLC and not a reworking of the game's basic structure. With that in mind, I can say that I very much enjoyed the thought and balance that obviously went into the creation of this new mission, and as a true Mass Effect fan, this attempt to return to form is probably the most welcome thing I could possibly imagine. Rating: 8.0 out of 10.

The latest DLC expansion for BioWare's space-based magnum opus, Overlord, was released on June 15th and is available for 560 Microsoft Points. ($7.00) This DLC pack contains a story split into five "missions," two new Achievements and at least one new piece of researchable equipment.

Disclosures: This game was obtained via paid download and reviewed on the Xbox 360. Approximately 90 minutes of play were devoted to the single-player mode, and the content was completed. There are no multiplayer modes.

Parents: According to the ESRB, this game contains: blood, drug references, sexual  content, strong language, and violence. Parents, let's make a long story short—This is a mature game aimed at mature players, full stop. Nothing else needs to be said.

Personally, I hated ME1. I only played is to get a save file to import to ME2. The hammerhead sucks, I don’t want to be driving around in a slow piece of crap on a hilly planet. ME2 got rid of almost everything I hated about ME1. Granted, I don’t like that it seems to play like a glorified shooter, but everything else makes ME1 seem sub par. Anyway, this DLC sucked for one reason, and that’s the Hammerhead missions. I don’t know what Bioware is thinking, but I’m sick of driving. Just take me there and let me melt… Read more »

A question for you: you are aware that the only Hammerhead missions in the “core game” were added via free (w/ Cerberus thingy) download right? There were NO vehicle missions in the vanilla campaign at all. I think the coolest thing about ME2 DLC is that it can be progressive. If you buy Kasumi, she’s available for the next campaign. Now that they’ve introduced the Hammerhead in the Firewalker campaign, they did some really interesting things with it in the Overlord campaign and so on. Hopefully they’ll come up with some other cool stuff for DLC campaigns (board an enemy… Read more »

I personally **loved** ME2 and it gripped me from start to finish and back again in a way that ME1 rarely did. However, I did miss the free-form vehicular exploration of ME1, with only a handful of Hammerhead missions in the core ME2 game. Having said that, ME1 compelled the player to commit many frustrating hours to roaming over bland fractal landscapes in the Mako, anally trying to map all the resources for the Achievements. Together with the infamous generic design for planetary bases/caves and side missions, I felt the whole planet-side aspect of ME1 was cheap and lazy by… Read more »

Hey all, thanks for comments. Carg0> TBH, I am a little concerned about the future of the series. ME2 wasn’t a bad game by any means, but it was off in so many ways that I’m not quite sure that BioWare knows what they want to do with it. I will undoubtedly play ME3, but I’m hoping that the development pendulum will swing the other way and BioWare will find a happy medium between ME1/2. Dry_Ice> good point about those romances. Although BioWare has said that they couldn’t do much with them because they had to be sure that all… Read more »

ME and ME2 are both landmark achievements. ME2 is different from ME, but also very similar. Quality is high, lots of game to play, and content is far more varied. Original was very short of unique environments, had lots of rendering issues, and had balance problems (battles were far too one-dimensional). ME2 has a richer storyline, far better environments, better rendering, and many more decision paths. The fighting element is much better, and difficulty has much better balance across levels. Recruiting everyone takes too much time, balance-wise, against the main storyline, but that’s just a decision disagreement I have. DLC… Read more »

Interesting review. I couldnt stand ME2, and found its disposable mission based shooter gameplay awful. It completely ruined many of the things I loved about ME1, and I havent touched it for months on end. While this review does make Overlord sound interesting (getting closer to the kind of mission structure ME1 offered), I still wont be getting it. Ive personally decided the only purchase Im going to make from Bioware before ME3 is that of an expansion pack. Thats also only provided I can be sure Ill be getting an improved experience to the one I got in the… Read more »

im in the same boat as you, Brad. loved the first one, thought the second one was crap. i traded my copy (Collector’s Ed.) in about two weeks after i beat it when i realized i had absolutely no desire to play it again. instead of listening to the people who actually liked and accepted the first for what it was and adjusting from there, they listened to the troglodytes who were upset they didn’t get Gears of War or Halo. (the same thing happened with Fallout 3 when that first hit store shelves but im confident in Bethesda having… Read more »